The Love and Rockets Reader: Less analysing of the funnies, more partying

So after chewing my way through the Dan Clowes Reader last week, I was ready to read some more actual comics, instead of books about comics, but then I wandered into the local store and stumbled across one about Love and Rockets, so I had to have that.

I can never say no to new Love and Rockets, in any form. 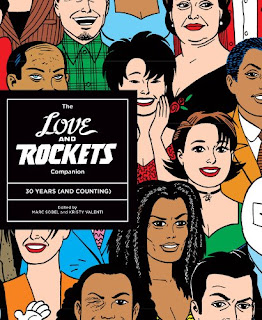 The Love and Rockets Companion – edited by Marc Sobel and Kristy Valenti – has a lot in common with the Clowes book. They both came out this year from Fantagraphics and both focus on some wonderfully idiosyncratic comic creators and their ridiculously awesome comics. But the Love and Rockets book doesn't have the same scholarly ambitions, giving more space to interviews and character & chronological guides than any essays on the obvious intellectual worth of the comics, and there is absolutely no criticism of the work, in any way.

This is not necessarily a bad thing, and perfectly suited to the free-wheeling, unpredictable and charming nature of Los Bros Heranadez comics. There is just as much insight into the creator's work in a twenty year old interview as there is on a modern essay on the trash TV the creator grew up on. The Love and Rockets book is a celebration of the comic's 30 years (and counting) on this planet, not a critical re-analysis.

Half of the book is taken up with interviews – and most of that stuff comes from previously published conversation – and the other half is filled with character guides, timelines, bibliographies and various bits and pieces. There is nothing new in there, but it proves surprisingly useful, and, in my case, even more surprisingly nostalgic for the dawn of the digital age. 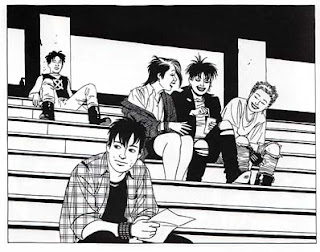 The first two interviews are reprints from old issues of The Comics Journal, including the beautifully long interview conducted by Neil Gaiman in nineteen ninety something, and if there was any hesitation in buying this book, it was caused by the fact I already have those issues of the journal, and they're a significant section of this book.

I also didn't have the sweet discount I got the Clowes book with, and needed to pay the full sixty bucks for this thing, but I still bought it almost immediately. Partly because it is nice to have these interviews collected together in a book that can sit on a shelf, instead of in magazines that are shoved inside a box built for Chardonnay, but mainly because there are also a couple of new interviews, including a recent one from editor Sobel.

Because he knows he has got the history of Love and Rockets covered in the other interviews, Sobel doesn't bother with any of that, but offers up an intriguing snapshot of Los Bros in the year 2012, giving Mario, Gilbert and Jaime the opportunity to talk about their own legacy, and where they think their comics stand in the world. The brothers are all older now, and have been doing brilliant comics for decades, and they are still absolutely blasting them out of the park, but this most recent interview shows they are still modest and humble, and a little unsure whether the type of stories they are interested in telling are the types of stories their fans want to read.

(Thankfully, their answer to this dilemma is 'Fuck it, we do what we want'.) 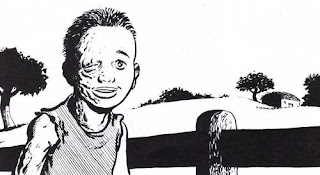 The other half of the book is mainly filled with long timelines and longer character guides (the latter is 70 long pages of pure data), and it took me two days before I realised the dust cover also folded out into a massive family tree thing.

It's all reference, and anybody who has got through the complete L&R comics will find little new here. But they are also strong reminders of the fact that the Locas and Luba storylines have racked up decades of intense storytelling, and that it's easy to forget a lot of the delightful little details, and it is nice to have all the chronologies laid out in full, and it see glimpses of forgotten faces.

I also found it surprisingly comforting. One of the very first things I ever searched for and found on the internet was a L&R chronology and character sheet, and when I found them somewhere in the nineties, when I still hadn't got hold of that many comics, it was an invaluable resource. I printed out those suckers, and I've probably still got them stored away somewhere. Probably under those Journals.

The comic's brilliance is always obvious, but the details sometimes get lost, and I got immense enjoyment out of flicking through the character pages, remembering old faces, and old storylines. I don't look at the reference to figure out what happened any more, I look at it to remember everything I've forgotten. This applies equally to Who's Who and The Official Handbook of the Marvel Universe (deluxe edition), as much as it does to the Love and Rockets Reader. 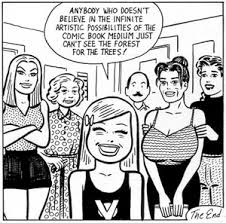 The book also has the best of the original L&R letters page, lists of the Brothers' favourite influences, and a checklist of the comics that I have already found useful, as I finally figured out which issues of Luba I actually missed. 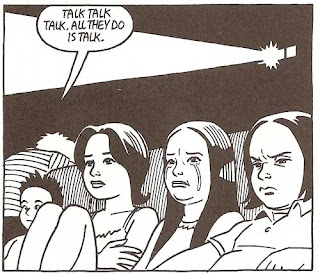 One of the first things Jaime points out in the Sobel interview is that he has always had the attitude of someone on the outside looking in, and that's a pretty good description of the typical Love and Rockets reader as well. It's certainly how I have often felt over the years, but reading the Hernandez brothers' comics over the years have been an absolute pleasure, with wonderful stories told with joy and intensity, until I'm no longer looking in on the lives of the Locas and Palomar characters, I feel like I'm living it with them.

There are plenty of other tiny insights like that, lurking between the lines of the interviews and reference notes in this wonderful Companion, and it was marvellous to immerse myself back into their worlds, down to the tiniest details. I'm waiting for the next New Stories with the usual breathless anticipation, but this book is a good way to fill the gap.

I've been dancing to this comic's beat for more than half my life and I can never say no to new Love and Rockets, in any form. The L&R Companion might not have that much new to say, and it's not as absolutely brilliant as the comics it commemorates, but it's a fine addition to the Los Bros Hernandez library.
Posted by Bob Temuka at 9:56 PM

I'm pretty sure Sobel has assembled a reader volume along the lines of the Clowes book (not sure if it will have any comics in it though) that Fantagraphics is gradually preparing. At least they solicited such a book last year along with this Companion and the Covers book.