Lobo: Who is the main man? 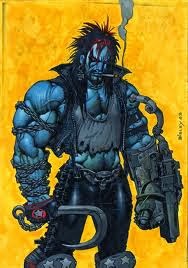 Lobo has always been dirty and smelly and rampaging, and his level of histrionic violence has always been incredibly silly and incredibly funny. Many right-thinking people are turned off by this big foetid mess of Lobo comics, but I am deeply fond of the character.

His glory days are long behind him, and that's not just in a sales capacity – there hasn't been a decent Lobo comic in years. It's a lot, lot harder to do that character than it looks like, which is why there are almost zero decent Lobo comics that don't have Keith Giffen and/or Alan Grant involved. (Lobo is, notably, one of the few DC characters that Grant Morrison just couldn't get his head around.)

So I haven't read a new Lobo comic in years, but there is still a part of me that is that 14-year old rebel I once was, screaming 'Fuck yeah, Lobo!” at the back of my skull, so I still follow the character, and when I saw that one of the special villain issues that DC is doing at the moment starred the latest version of Lobo, I had to try it out. See what he was up to.

The results were fraggin' disappointing. 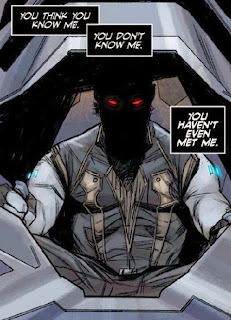 DC's most recent reboots have been played fairly safe, with only minor tweaking of the major characters. (After all, the small cosmetic changes to somebody like Superman where enough to generate a flood of online bile.) So when they first brought Lobo into the New 52, he was basically unchanged, even if he was saddled with a painfully unnecessary back story involving some lost love.

But the idea of Lobo as a dirty old biker appears to be deeply unappealing to DC, who have ordered a total redo of the character, and he appears in a comic that is either called Justice League #23.2 or Lobo #1. I can't really tell. 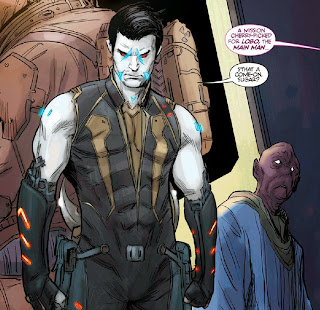 Anyway, there is the new version of Lobo, and frankly, he's just another space-poser, with slick hair and a tight bodysuit. A humourless arsehole, engaging in forced banter, boasting and moaning in an interminable interior monologue. He's wincing in pain, and dancing around his enemies and slicing them into pieces with his laser “choppers”.

He's just another evil dickhead, selling off slaves to their doom, but “violent, sociopathic dick” isn't exactly a unique selling point in the modern DC universe, where every villain is willing to throw a baby under a truck, (and many heroes aren't that morally better)..

To be fair, this is actually quite close to the original version of the Lobo character, as he appeared in The Omega Men back in the day. But, with all due respect to Roger Slifer, it wasn't until he put on the leather jacket and started committing mega-mayhem that the character became palatable and popular. 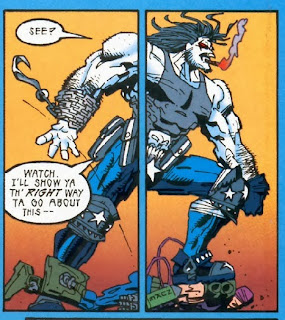 Fortunately, there are still tonnes of Lobo comics out there, featuring the hyper-violently funny version, and there are so many, it's taking me decades to find them all. When he was mega-popular in the mid-nineties, DC pushed out a lot of Lobo comics. They even held off on doing an ongoing for slightly too long, but produced a shitload of one-shots, mini-series and other specials.

Things with titles like Portrait of a Victim, A Contract on Gawd, Blazing Chain of Love, Infanticide and the excellent Unamerican Gladiators. That last one had some brilliant Cam Kennedy art, and there was strong art in most of these comics, even if it tended to register as VERY HEAVY on the metal art scale.

(Metal art is deeply unfashionable, which makes it almost cool again, and after sneering at bulging muscles and apocalyptic landscapes for years, I've come back around to appreciating extreme comic art. I also almost bought my first Iron Maiden tee-shirt in twenty years the other day.) 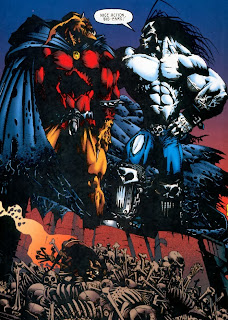 I'm still looking for Lobocop, (mainly because of the art by the late, great Kiwi artist Marty Emond), I almost got the Kevin O'Neill comic convention special once (but the  seller was asking a preposterous price), and I've never even seen an issue of the 1996 Death and Taxes miniseries. But I keep stumbling across more of them, and this week it was a prestige format thing called Lobo: Bounty Hunting For Fun And Profit. Something I never knew existed until I found it in the back issue bin at Arkham comics last weekend.

Written by that man Alan Grant, who always got the right level of absurdity into his violence, it has some more fucking fantastic art from O'Neill and Emond, and a rare appearance in US comics for Robert McCallum, a terrific Scottish artist who shared the blocky detailing of Frank Quitely, (who was also coming up at the same time), but who eventually disappeared into film work after being screwed over in comics once too often, doing concept art for films like Pacific Rim and Scott Pilgrim

It might not be the greatest Lobo comic – that's still the absolutely mental Simon Bisley stuff – but like all the best Lobo, it's a totally disposable story that is just an excuse for chuckles and carnage, as Lobo reveals the “secrets of his deadly trade” to the reader, (which largely consist of shooting people in the face for any reason). 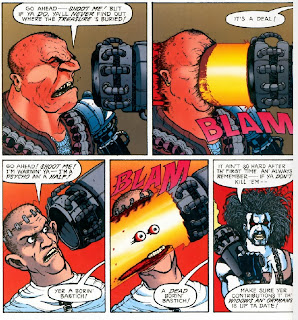 There have been worse reboots in DC's new 52 – if you dig suave, slick and serious anti-heroes who are vaguely omnisexual and know how to pose with their weight on one hip, the new Lobo certainly ticks all those boxes.

But I just like the filthy version better. I know he is immature and obscene, but he's my kind of psychopathic maniac. I'm half-hoping that the new version will show up for two panels before ending up on the wrong end of the original's hook-on-a-chain, (which, as a symbol of violent anarchy, is far more timeless than laser choppers).

That could happen, but I don't care enough to find out. I'll probably read about it on Wikipedia. It's not like I need the new stuff anyway. I've got too many old issues still to fragging find.
Posted by Bob Temuka at 6:00 PM

Lobo's more of a 2000 AD type antihero, which is probably why Grant does him so well and I think the Lobo / Dredd crossover is one of the most underrated 'good dumb fun' comics around, Lobo meeting Mean Machine Angel is my favorite ever 'crossover' meeting.

And there is at least one great Lobo comic not by Grant or Giffen. Perhaps not very surprisingly, it's by Garth Ennis, check out the Hitman / Lobo crossover which is like a Elmer Fudd / Bugs Bunny cartoon and has some very funny moments

I've been practicing my lassoing skills...Lobo's going down like a baby calf in a rodeo

Tear Room of Dispair has a catchy ring to it...I think I'm gonna paint that above Lobo's Jail Cell when I lock him up! Since Andy's away at Collage we decided to convert Andy's basement into a Dungeon,

"Lobo has always been dirty and smelly and rampaging" In the 90s, perhaps. Pre-Flashpoint Lobo from the 80s was a very different creature entirely, before he was made into an imbecilic hyperviolent Loony Tune. I don't think Lobo should be played for laughs imo - not only is he one of DC's darkest characters, but he's also one of the few notably cosmic characters outside of the New Gods and the Lanterns. The character is ripe with potential (and not just in terms of comedy).

"But, with all due respect to Roger Slifer, it wasn't until he put on the leather jacket and started committing mega-mayhem that the character became palatable and popular." Actually, Lobo had been pretty popular thanks to JLI and L.E.G.I.O.N., which in turn allowed the character to get a series of his own.

You do realize Lobo is hiding from Sherrif Woodys Round Up! The Sherrif has gone rogue and is locking up all the villains...and even though Lobo is a bounty hunter, the Sherrif still considers him a villain.

I do have a spare copy of Lobocop if you are still looking for it and happen to be based in NZ.

In my opinion, Martin Emond was the best Lobo artist, edging out Bisley.