I love Ghost Rider's big flaming fucking head, and his kick-ass motorcycle with fire for wheels, and his chains and leather, with poor Johnny Blaze's tortured soul inside, blazing a path through themes of damnation and redemption in fuel injected suicide machines

Which is a bit weird, because I can't think of an actual Ghost Rider comic that I really liked. 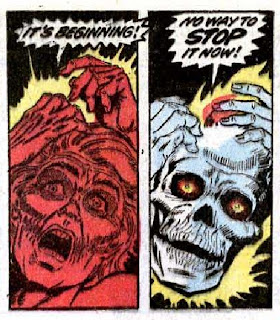 Marvel Comics has about eleven-billion names in its character bank, and most of them are rubbish, names to be tossed into the grinder of near-worthless modern comics like Avengers Arena. But even the lamest character has its supporters - even Turner D Century can find some love, even if it's mostly ironic.

And there are also a lot of bloody good characters in Marvel's database, built on a foundation of pure Kirby, and refined over decades into universal icons. Everybody knows who The Avengers are now. Everybody knows who Ghost Rider is, even if it's just because of those shitty movies.

I really do love the idea behind Ghost Rider. Creator Gary Friedrich is making slow progress for legal acknowledgement that he came up with the concept, and who can blame him? Even after all these years, when done right, Ghost Rider comics can be visually spectacular, because a flaming skull is Always Cool.

I just don't particularly like that many Ghost Rider comics. 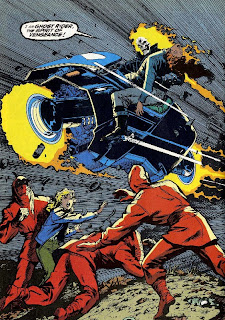 The earliest Ghost Rider comics from the mid-seventies coasted on that fantastic premise for a couple of years, especially with some typically lush artwork from Jim Mooney. But it settled into a pretty big rut when that ran out of juice.

The flame had long burned out by the fiftieth issue, and the series spluttered on for another three years before finally running out of gas. The last few years of the first Ghost Rider run aren’t offensively bad, but just mediocre ( which can be even worse), with creative teams who really do feel like they’re going through the motions for the paycheck.

He was still popular enough that Marvel wanted to do more with the character, so he popped up in things like the Champions, Marvel's most pointless team book, where he again featured in a number of eminently forgettable adventures with other characters that Marvel happened to have lying about. (Again, the Champions also have their fans, but compared to the brilliant things that were happening in other Marvel team books of that time, like the X-Men, Avengers and the Defenders, the Champions really were a bottom-ranked team.) 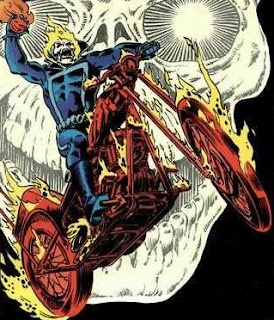 Like the first series, the next incarnation of Ghost Rider also had some kick to it in its opening issues, no doubt helped by the fact there was a seven-year break for the character through most of the 1980s. When it did come back  in 1990 - as part of a wave of new and slick Marvel comics to come out at that time – Ghost Rider quickly became one of Marvel’s most popular characters, with his badass chains and penance stare, and hardcore attitude to evil.

This is my Ghost Rider - I was 15 when the nineties version first made his mark, and I bought that first issue off the shelf of Baird's Bookshop and loved it. I thought that first issue by Howard Mackie and Mark Texeira was terrific, and I even thought it was the best comic in the world for a good couple of weeks. But I was already souring on it by the time the second issue rolled around, and when the next few issues failed to even show up at the local bookshop, I wasn't too bothered. The only other issues of that series I would ever get were the crossover with the X-Men a couple of years later, mainly for the Jim Lee covers.

Other people stuck with it, and it lasted through most of the decade and managed to rack up 93 issues. But once again, the series grew increasingly dull, with its blend of gritty crime, hokey conspiracies and endless goddamn ninjas. Marvel were also once again unwilling to let any success stand without running it into the ground, and churned out all sorts of Ghost Rider spin-offs and crossovers, until any kind of interest in the concept or goodwill towards the character was once again wiped out. Ghost Rider was dead and buried again. 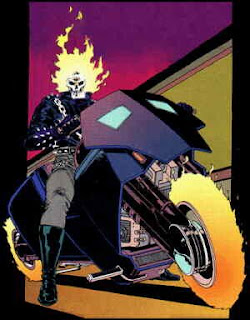 There have been several more attempts to get the Ghost Rider concept back out onto the highway in the past few years, but fine writers like Garth Ennis and Jason Aaron have failed to really make much headway with the idea, falling back on sick redneck humour and the usual hellish bollocks. Mark Millar did try something a little different with his Mr Ghost Rider Goes To Washington storyline in one of his Ultimate Avengers stories, but that still felt like the character was riding around on flat tyres.

So all that’s left are a small pile of painfully average comics and two genuinely awful films, with Ghost Rider’s forays into cinemas blowing away any last residual positivity towards the concept. 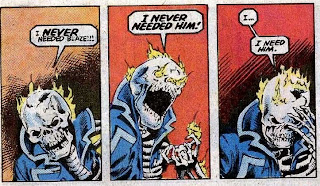 And yet, even though I only own one single Ghost Rider comic now (that #1 from 1990, with the NZ price scrawled on it in pen by Mr Baird, which I hold on for unashamedly sentimental reasons), I still love the Ghost Rider concept.

There is a good story in there, of men who have been cheated by the devil, but who also outrace damnation on awesome motorbikes. But most of all, it's that look, and that design that remains the biggest part of his appeal. While Ghost Rider scripts have often been lacklustre, they do often have some fantastic art - as well as Mooney and Texiera, distinctive artists with distinctive styles like Mike Ploog, Salvador Larooca and Clayton Crain have all produced some fine-looking hellfire on wheels.

After all, it's a motorcycle bandit with a flaming skull for a head (once again - Always Cool). In a Marvel Universe where a splash of spandex is often enough for a character design, the Ghost Rider still stands out. His bike and leathers often change with the times - his cycle in particular never stays the same, and updates with a new look with every reboot - but he is instantly recognisable. Nobody would ever mistake the Ghost Rider for Mr Fantastic or Captain America.

And so I still have some hope that there will be a Ghost Rider comic in the future that is as good as the original concept. There may have been dozens of creators over the decades who have failed to really breathe any new life into the stories, but with such a strong look and rock-solid premise, there is always hope. Even for a character whose face is on fire.
Posted by Bob Temuka at 5:17 PM

Oh man I KNOW you did not just dis the Champions. 2 X-Men, Greek god, Russian spy, guy with head on fire... what's NOT to love?

The early issues of the Champions were pretty dire, especially the artwork by (gack!) Don Heck. The first three issue story arc, which given that the book was bimonthly meant it took four months to finish, might have sealed the books fate right there.

Things got better as the series went along, though. We went from Heck to George Tuska to Bob Hall to very early and at the time startlingly good work by John Byrne. The writing also got better. Sadly, that first solid year of (again, bimonthly) bad issues probably sealed the deal.