When I came home last Saturday afternoon with the final Grant Morrison Batman comic, I had to warn the wife that things could get a bit emotional.

It wasn't just that it was the final piece of a brilliantly epic run on one of the greatest characters in comics. It was more personal than that. When I first moved to the biggest city in the country, (mainly because it was the lovely wife's home town), the first comics I bought were the first four issues Morrison did.

The next few years have been – hands down – the best in my life, and there has been a constant background of Morrison's Batman, and now that's not going to happen any more, and I feel weird and conflicted about it.

She said I sounded like a loony, but while she loved the fact that I saw strange and pretentious patterns in everyday life, she assured me I would get over the lack of new Mozbat.

I think she's right. I do sound like a loony. But I can't help it. That's what happens when you end up tying every major event in your life to the comics that you happen to be reading at the time. 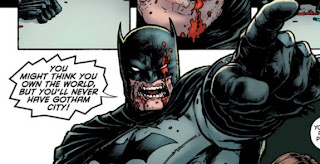 I started reading comics before I could read, and I don't think there has been a single day since when I haven't been reading some kind of comic. If I don't buy something every week, I feel unfulfilled and weird, so I make sure this doesn't happen.

So it's no wonder I can't help associating certain and specific comics with certain and specific times in my life. I moved around a lot when I was younger, and lived in more than 30 different houses before I turned 30, but it's easy to keep track of where I was when, because I can remember what comics I was reading at the time.

(It also helps that new comics come with handy dates, so if I want to know what year I lived in a a certain place, I can just look up the cover of a comic I was reading at the time, and pinpoint the year.)

So if I pulled a Billy Pilgrim and came unstuck in time, and I needed something to keep track of where and when I was, I would come back to the comics. It would always be the comics. 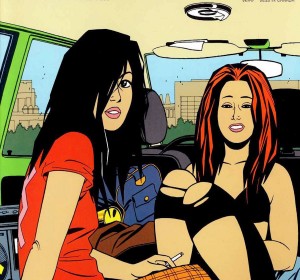 I've been utterly obsessed with Love and Rockets for more than 20 years, so that's a good marker, as I fall in love with Los Bros comics over and over and over again – reading #34 of the original series on the grass beside Maori Park Pool in the excellent summer of 1994/1995; seeing the last issue of the second series for the first time in a New York bar in 2007, reading Duck Feet up on a Mongolian hilltop, the year before last.

Or I'm reading that issue of the Joker comic in 1979, as my Daddy goes off to work early in the morning and I'm baffled about why he has to go away every day, and then I'm worried about what happened to my Doom Patrol collection in 1996, when I drank too many jugs at the Mosgiel Darts Club and my Dad had to take me back to my flat after I threw up in his car.

I'm reading The Further Adventures of Indiana Jones in 1984, and trying desperately to find the last issue of DC's Invasion! Crossover in 1989. I'm taking the Invisibles way too seriously for almost all of the nineties, and my linear thinking is still fucked. I'm reading the last issue of Preacher in 2000, in the same week my grandmother dies, and I'm devouring huge chunks of new 1981 Marvel comics from the second hand bookshop where she worked at that time.

I think Claremont and Davis' Excalibur is the most perfect comic in the world in 1990, and I'm reading The Big Book of Conspiracies five years later, when I should be working at the first office job I ever had, and another ten years after that I read all of Planetary for the first time on a lazy Saturday afternoon in Blenheim, while the wife is off at a wine festival.

And in mid-2013, I'm reading the last issue of Batman Incorporated, nearly seven years after I pick up those first issues (and from the very same shop), and I actually dig it's final discordant note, as Morrison once again points out that Batman and Robin will never die, but gleefully points out that this isn't always a good thing. 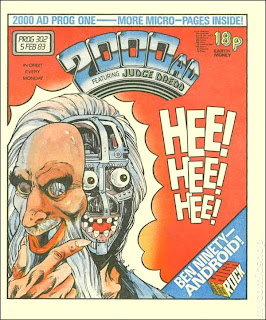 Hell, I could nail every significant peiod of my life to the equivalent issues of 2000ad at the time - I'm only five when I read my first issue, and its the Fiends of the Eastern Front that have the most terrifying impact at that age, and I'm in standard three at Highfield Primary School when old Ben takes his face off and reveals he's a cyborg on the cover of prog 302.

It's 1990 when I find out who the Dead Man is, and I know exactly what house I'm living in when the second Zenith interlude – the one that told the story of Cloud 9 – is enough to bring me back into the 2000ad fold in 1988, and I'm only living around the corner from there when #1182 brings me back again, 15 years later.

A weekly comic that started when I was three, and I'm still getting it every week now, and each time I dip into the back progs, I can smell the past, and dredge up half-forgotten memories, and I remember where I was, at that time. I can't help but remember. 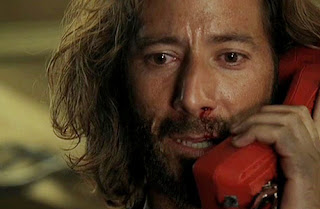 My absolute favourite episode of Lost is, unsurprisingly, The Constant, mainly because I'm a hugely sentimental softie who gets all choked up when separated lovers literally cross oceans of time to reach each other, even if it's just for the briefest conversation.

In the episode, Desmond uses his love for Penny to bring him back to reality when he becomes chronologically challenged, and it's love that keeps him in this world, just like love keeps us all from losing our shit in the everyday world.

(Just as unsurprising – I also found this obvious metaphor to be one of my favourite things in The Flash when Mark Waid was writing it, and adored the way only Wally's love for Linda would keep him from merging with the infinite.)

If I really did get lost in time, I'm sure it would be love for my lovely wife that would bring me back. I wasn't exaggerating earlier when I said the past six years have been the best in my life, and she's been at my side during all of the greatest moments of my life in recent years, (and responsible for the vast majority of them). Of course it would be that love that I would keep coming back for.

But for the other two-thirds of my life, when she wasn't there, the only other constant is the comics. They're always there, and they always will be.
Posted by Bob Temuka at 7:27 PM