All those lost book stores

There is exactly one book store on the main street of New Zealand's biggest city. In a city of more than 1.5 million people, on a street of high-density, high-traffic retail that stretches for more than a kilometre, there is one chain bookshop.

While I understand that the business behind retail bookselling is fairly screwed, I still think the lack of decent book stores is woeful, and a situation that has only gotten worse in the past few years. There used to be a four-storey Borders in the centre of town, but there are no more Borders anywhere, and a sweet little magazine shop that was always packed with people must have been packed with browsers, because they couldn't afford a rise in rent, and also closed a year ago.

The Borders has been replaced by a gimmicky mini golf course and a Carl's Jnr, and the magazine shop turned into a pop-up shoe store. 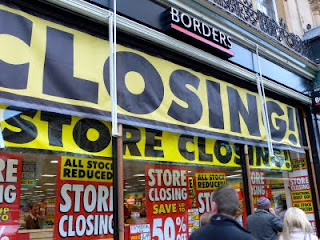 Bookshops are always my favourite shops. When I'm buying clothes, or a car, or shoes, or some kind of furniture, or some electronics, or groceries, or a house, I don't really care about what I buy, and I just want to get something and get out of there as quickly as possible. But I can literally spend hours in a good bookshop, and never get bored.

I've always judged towns and cities by the standards of their book stores, and they're the only thing I'm looking for when I travel to a new place. I'm always looking for the comic shops, of course, but I'll stop by a good general book store any time.

I had no brothers growing up, just sisters and a Mum who loved to spend hours and hours in clothes and shoe shops, which made me crazy, so I would always bugger off to the nearest book store. Even if it was just another chain, with all the same stock as every other bloody store, there would always be something to browse or buy.

I do think book stores lost a lot of their charm when they all started turning into franchises – if every shop has the same old shit, why bother going to a new one? But the main reason for a sharp drop in the number of stores in the past ten years – and the utter failure of mega-retailers like Borders – has been the change in reading habits, as fewer and fewer people object to reading large amounts of text on a computer screen. 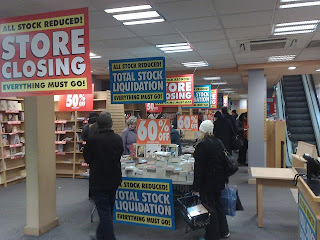 I'll never be sold on the merits of reading from an e-book, and paper and print will always be my thing, but it would be foolish to ignore the huge shift in habits. Contraptions like iPads and Kindles are everywhere, and many readers have made the full-time migration to digital.

This is still a good thing for reading in general – at least people are reading something – but terrible news for brick and mortar retailers, who are cut out of the supply chain completely, cutting directly into revenue and making many stores totally unprofitable. Second hand bookstores, a particular favourite of mine, have been badly hit by the digital age, and many have closed in recent times, although the best are still there.

The other side effect of this digital age is in the actual purchasing of physical books, especially in this part of the world, where the reading public has long been at the mercy of distribution companies, as to what is shipped all the way round to the arse end of the world.

Now I can get on Amazon (both US and UK), or on local auction sites and find anything I want, at a pretty reasonable price. Online shopping is rubbish for decent browsing, but if you know exactly what you want, it's only a few mouse clicks away.

I'm tempted by some of the incredible deals I see from the big online retailers, but I still prefer to get it from a local shop. Part of it's the immediacy: the time between payment and receipt of goods is less than a second, while it can take weeks for a Amazon order to show up.

So I get some stuff from Amazon UK every six months or so, and it's always stuff I can't get in this country. I snap up DVDs of British comedy shows from the past decade that never got released in here, although that ended up being a hell of a rabbit hole. Garth Marenghi leads to Time Trumpet leads to 15 Storeys High leads to all the bloody shows Armando Iannucci is involved in leads to Black Mirror, and it's all so bloody good.

Other than that, the only things we buy online are Kim Newman books that I also can't find here, and I do look. I do want to help my local retailers, but sometimes there is no choice. 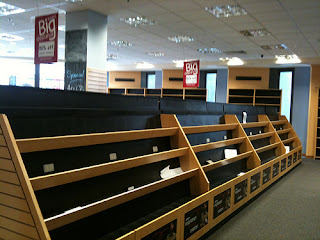 The closure of book, magazine and comic stores is a bit of a vicious circle, as consumers are forced to bypass normal retail channels, because the stores where they used to get a steady supply of words just aren't there any more.

I bought my first ever magazine subscription a year ago, after that magazine shop in the centre of Auckland turned into a shoe store. I had bought every issue of UK film magazine Empire since the mid-nineties off the shelves, but then those shelves disappeared, so I got on the internet and had a twelve-month subscription in less than 10 minutes, and now it comes straight to me, much faster than it used to, and it's massively cheaper (less than half the p[rice I was paying at the shop).

But I do weirdly miss getting it from the shop. One of my notable pleasures every week is seeing a new 2000ad on the shelves of a nearby newsagent every Thursday morning, and I do miss that tiny thrill of a new magazine out for sale. 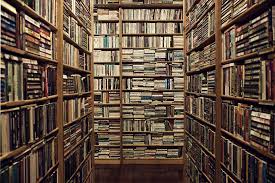 Almost all of the bookstores where I bought books and comics and magazines as a kid are gone, (although my very first favourite bookstore where my Nana worked when I was six - where I used to go every Tuesday to exchange a grocery bag full of comic goodness for new stuff - is still there).

There are still good bookstores in my city, and there are even a couple of decent ones within a block or two of the main street, and there is a record store that has an awesome variety of books, and is one of the best places in town to buy discounted comic collections.

I think there will always be an audience for books, and while there aren't enough readers of physical copies to sustain a lot of booksellers, there are still plenty of readers and plenty of stores left. But there could always be more, especially next to shoe shops.
Posted by Bob Temuka at 7:20 PM