No style, no love (or, How Samurai Jack and DC lost their mojo)

Even though many comic readers cling to the misguided belief that comics will only achieve a serious status in modern culture by overcranking the prose, comics are still an inherently visual medium, rather than a literary one. A comic could have the smartest and most meaningful plot, dialogue and characterisation in the world, but you need great illustrations to make a great comic book.

It's all a matter of style, and the very best comics always feature art that is distinctive and stylish – a pure artistic vision that can only come from the pen of an individual. Any comics that come with bland, generic and derivative art barely qualify as a comic. They're just product.

Shit, no wonder I'm reading less DC comics than any time since forever. 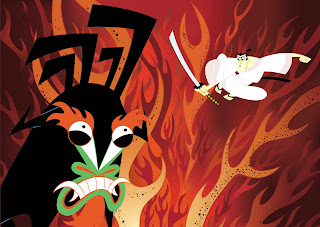 I inhaled all four seasons of the fantastic Samurai Jack recently, falling hard for it's streamlined storytelling, crazy action and quiet moments of humanity and honour, all smushed together in a kid's half-hour cartoon. But the thing I liked the most about it was the crazy stylisation in the animation, with bold jagged lines, sparkling colours and slick movement. It really didn't look like anything else.

And even though he is always willing to point out that it's a real team effort, most of the credit for Samurai Jack's brilliance is given to creator Genndy Tartakovsky. When he followed up Jack with the best Star Wars cartoons ever created, it really looked like he'd found a place in modern culture for a distinctive vision, one that was both creatively and commercially successful.

But when he made the leap into full-feature filmmaking last year, it was crushingly disappointing when the result turned out to be Hotel Transylvania, a totally generic piece of computer animation.

It still had some of the Tartakovsky pacing, especially during the action scenes, but instead of the distinctive style generated by pen and ink, Hotel Transylvania has the same look as a dozen other CGI kids films – the same over-realistic backgrounds, mushy human faces, and washed out pastels. There are still hints of Tartakovsky's style in the exaggerated chins and updated monster designs, but it's buried beneath that cloying layer of artificiality.

If there is no style, there is nothing, and the disappointment I felt when I saw Hotel Transylvania was the same I feel when I flip though an issue of Previews. There is still plenty of good stuff coming out every month, but there is also too much bland anonymity.

DC is the biggest culprit, churning out too much mediocre comics just for the sake of maintaining a market share. The New 52 relaunch was a perfect place to diversify its superhero line into a broad range of styles, but soul-crushing deadlines, editorial panicking and a dedication to quantity over quality meant the art of most of those 52 comics was simply sub-standard.

There are, of course, exceptions - Moritat's art on All Star Western has been fantastic (and the back-up artists aren't too shabby either), and Chris Burnham has been doing a bang-up job on Batman Incorporated, but they're islands of stylistic brilliance in an ocean of medocrity.

It's funny to look back at things like Back Issue magazine and see the kind of covers that editors like Julius Schwartz and Carmine Infantino and Joe Kubert used to reject in the sixties and seventies – brilliant work by Neal Adams and Nick Cardy and Jim Aparo that still wasn't quite good enough for the editor. In contrast, a lot of the current artists on DC comics, some of whom have been in the business for years, show a stunning disregard for storytelling, or even basic body language, and wouldn't come near a printed page if the standards of the past had been held to. 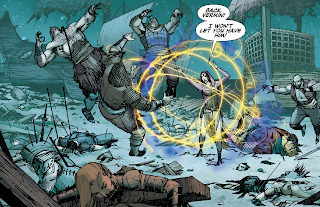 Books like Demon Knights needed their own look, a chunky and dark style would have suited the story well, but it ended up with the same scratchy, clumsy, washed-out bullshit that so many other books share. John Constantine makes the leap from Vertigo to the regular DC, and that means his art also has to be as generic as possible, a severe letdown after the last few years of Hellblazer, when Giuseppe Cammuncoli and Simon Bisley were doing wonderful things.

Almost all of their biggest artists – with some notable exceptions, including the always-reliable Doug Mahnke and often-brilliant Cliff Chiang – share a fondness for the overworked line, covering up art deficiencies with complicated muscles and silly digital effects. There are too many third-generation Jim Lee clones, which shouldn't be surprising, considering the best superhero artist of 1992 is still the biggest artistic name in the company.

And the colours aren't helping – Grant Morrison's Action Comics become surprisingly hard to get into when they're covered in muted greens and pale browns. There is no sense of design in the colour schemes, or any flow. It's all over-complicated bollocks, from art to colours, to big 'master-plans', and that's why the only DC comic I'm getting at the moment is Batman Incorporated, which will finish soon. 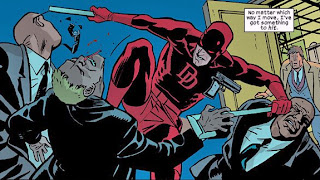 The story isn't quite so bad at Marvel, which has also committed to a line-wide relaunch recently, without forgetting to load up on actual talent.

Most of Marvel's biggest books have excellent art and a bewildering amount of brilliant styles, with artists like John Romita Jr, Chris Bachalo, Daniel Acuna, Jamie McKelvie, Esad Ribic, Javier Pulido, David Aja, Alan Davis, Chris Samnee, Mike Allred and Stuart Immonen all bringing their typical A-game to various books. The most recent issue of Uncanny X-Men is drawn by the magnificent Frazer Irving, and his usual gorgeous art actually fits in nicely with the look of the book.

Marvel's best comics – including Daredevil and Hawkeye – both have a beautiful colour scheme taht compliment the efficient stories and staggeringly solid art, with people who actually put some thought into how the comic's palette will run, rather than hacking it out.

The talent pool is fairly thin. Marvel is just as bad as DC at over-saturation, and beyond the main titles and a few smaller gems, there is still plenty of mediocrity. But at least they're making the effort. 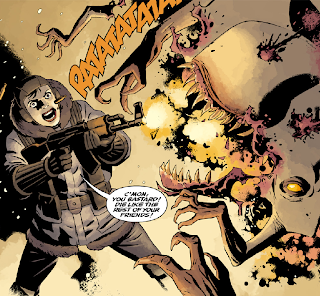 After all, they're still better than DC, and other individuals and companies have shown it is possible to create a line of comics without resorting to bland conformity. Just look at Mike Mignola's mini empire of comics.

Mignola and his talented collaborators have created a number of comics - including Hellboy, BPRD and numerous spin-offs - that all have a deliberate look, without swamping the artist's individual style. These books all have strong use of shadow and a heavy black line which unites artists as diverse as Duncan Fegredo, Guy Davis and Mignola himself. Combined with an impeccable design sense, these books all look beautiful, complimenting the crazy stories they tell. 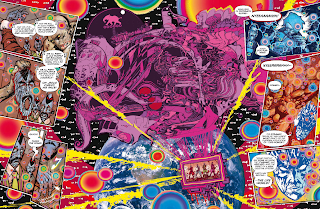 A lot of my passion for individual art styles comes from growing up on a steady diet of 2000ad, and gorging on the instantly recognisable artwork that filled its weekly pages, and this is why I'm repulsed by dull same-old same-old shit.

It's a comic that can have a bewildering amount of different styles beneath the covers - recent issues have mixed up the old school blockiness of Carlos Ezquerra with the stark, glowing lines of D'Israeli, while still finding room for Henry Flint's multi-coloured madness, the straight-up storytelling of Patrick Goddard and Steve Yeowell's latest work, which has him drawing people like they're characters in a Terrence Dicks book (which is a good thing).

This is where mainstream comics are at their best - when they have artwork that doesn't look like anybody else, and give the reader something startling and new. The dullness that captured the creator of Samurai Jack has also caught DC Comics, but it really doesn't have to be that way.
Posted by Bob Temuka at 7:10 PM

Good points. I remember seeing that the new 52 was going to have Rob Lie-feld aboard was instantly disheartened.

Have you been reading Young Avengers? The art in that's been pretty crisp and clean. I really liked one two-page panel they did in the last issue where they show Marvel Boy kicking !@#$ as a diagram.

Oh yeah, Jamie McKelvie has been doing a terrific job there. I always found his art a little stiff, but it's really starting to open up....

Tartakovsky did Hotel Transylvania to break into movies. Next up he's doing a CGI Popeye, which may also be dreck, but he's stated his intentions to push 2-D animation as much as possible. It may take years, but we could conceivably get a Samurai Jack movie.
(By the way, Samurai Jack is empirically the best cartoon made for American TV. It's done stuff the films haven't done, things that only the medium of animation can do. It's a pure cartoon.)