After being swamped in the awfully neutral tones of the DC universe in the last post, I needed to read some good stuff to get back in the comic groove.

Fortunately, it's 2013, and there is loads of good stuff. Like these five books. 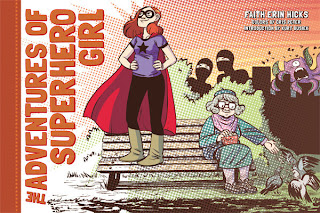 The Adventures of Superhero Girl
by Faith Erin Hicks

It's maddening to see the default setting for superheroes is ultra-serious, when there is still so much fun to be had. In a perfect world, Faith Erin Hicks' Superhero Girl would sell more than the JLA.

It still might, because these types of light, funny superhero comics are infinitely more timeless than Superman's collar. It's not as twee as it first appears, and each strip is bright and colourful, and genuinely humourous (I especially liked King Ninja at the job interview), and that never goes out of fashion.

Shamefully, this is the first of Faith Erin Hicks' books that I've really read, largely due to availability, and also because I'm a total loser when it comes to digital comics. But it won't be the last. 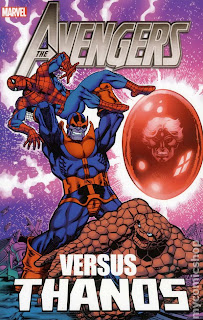 Avengers vs Thanos
By Jim Starlin and chums

This is the kind of trade paperback I used to literally dream about when I was a spotty teenager – all those impossible-to-find issues of Captain Marvel and Iron Man and Warlock where Thanos first appeared. (I like Thanos. A lot.)

As a slightly-less-spotty 38-year-old, I'm still quite chuffed it was put out, because I still haven't read any of these stories. I'd never even seen anything before he showed up in Adam Warlock's often-reprinted story. I knew all about it, thanks to in-story recaps and the indispensable Official Handbook of the Marvel Universe (Deluxe Edition), but I'd never actually read the comics.

Until Marvel, inspired by a tiny cameo at the end of the Avengers film, decided it needed to get as much Thanos out there as possible, and cobbled together this collection.

It's fascinating to see how the character evolves, especially when almost all of his development is steered by Jim Starlin, who plots and draws the vast majority of this big 500-page collection.  Thanos isn't quite the nihilistic demi-god he will become, and it's interesting to note that while he is a rip-off of Darkseid, he also shares that initial character clumsiness with the DC villain.

But that does work itself out, and by the time he literally walks through a hole in the universe into Warlock's saga, he is almost fully formed and recognizable as the character he is today – verbose, eloquent and utterly ruthless. It all climaxes in the Team-Up/Two-In-One annuals where Thanos is a legitimate threat to all existence that must be stopped, no matter what the cost.

The stories in this collection are fairly clunky to the 21st-century eye, but they are also energetic, fast and effortlessly epic. I might not have had the chance to read them when my Marvel zombiness was at its heights, but I'm glad I got there in the end. 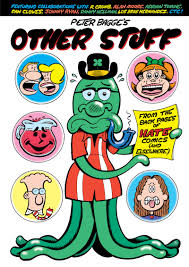 So I went to Free Comic Book Day and got the new free 2000ad because it had new Dredd and Zombo stories in it, and I saw a copy of this book, and I didn't even knew it existed, but I wanted it so bad, but it was forty-five bucks, and I didn't want to spend that much right there (plus, I'd actually read most of the content in the book, in one place or another), but then for the rest of the day, all I could think about was how I should've bought it, and it kept bugging the shit out of me, so I went back to the shop ten minutes before it closed and snapped it up.

I was right to do so. This book is excellent. Like the Thanos collection, this collects all sorts of scattered Bagge (although most of it has appeared in Hate, in one form or another), including his collaborations with Crumb, Moore, Tomine, Clowes, Ryan, Hellman and Los Bros Hernandez.

It's not as tightly focussed as his earlier Everybody Is Stupid Except For Me, which collected his cartoon reporting, but the looser Bagge's stuff gets, the better. Other Stuff is funnier than that book, even if there is that same sociological satire, because it has Bagge people wigging the fuck out, and nuthin' is funnier than that.. 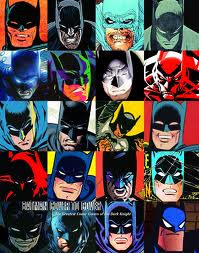 My recent disappointment with the look of DC comics is all the harsher because they can sometimes look incredible, especially when the company has some of the best designed characters of the 20th century.

After all, it has Batman – a character whose design may be the most effective of the past century, with his blend of deep, dark shadows and ostentatious goofiness, and nothing highlights that like Batman: Cover to Cover, a collection of various Batman covers from the first sixty-something years of the character.

The book came out in 2005, and it's already a bit dated, with Jim Lee getting a bit too much love, and a heavy weighting towards the post-Crisis years. But the book also has pages and pages of gorgeous, full-colour Bat-covers, from all periods, in all sorts of styles, and they show that DC has a history of strong art, innovative design and terrific colours, a heritage that it should always try to live up to.

Sometimes, I just want to sit around all day and look at the covers for Batman comics. Sometimes, I do just that. 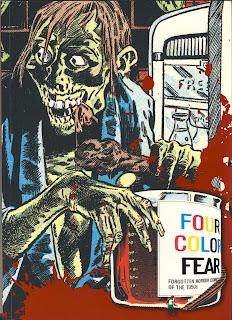 It's easy enough to sample the output of EC's horror comics from the 1950s – they've been reprinted often in a variety of formats, and some of the most famous stories are comfortably familiar.

But the great thing about the world of comic books is that there is always more to uncover, and there were plenty of other comic companies who followed EC's lead and dabbled in macabre fiction. Four-Colour Fear, a 2010 book from Fantagraphics, digs up some of these rotting corpses for 300 pages of monsters and madmen.

The EC comics were incredibly slick productions, with a fine roster of talent producing great comics. Their contemporaries didn't have the same level of quality control, and many of the stories in Four-Colour Fear are really clumsy, in both story and art.

But, oddly, the clumsiness ends up making the stories more disturbing- the way demons and ghouls just turn up without any dramatic entrance, as if the supernatural is just an everyday thing, helps fuel a sense that anything could happen, at any time, and that something horrible could be coming to tap on the shoulder of ordinary people caught up in a nightmare.

Some of the stories are reasonably well-done, with strong plots leading to gruesome pay-offs, along with gorgeous art by the likes of Jack Cole, Wallace Wood, Basil Wolverton and Joe Kubert. The book also features a small selection of covers, and while most of them are the usual mix of grotesque horror, a couple of them are pretty damn stunning. William Ekgren's covers for Strange Terrors #4 and Weird Horrors #7 are extraordinary: 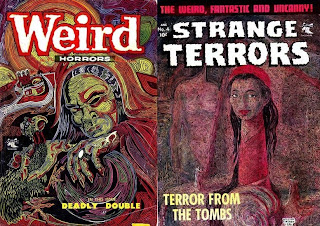 The flashes of genius amongst the gore in these comics can be breathtaking, and there is still plenty of creepy fun with the rest. And that, along with the other books, is all it takes to remember how much I love comics.
Posted by Bob Temuka at 11:12 PM