It's all about the merch!


A few years ago, I went to an amusement park just outside Sydney which had a vague Marvel superheroes theme, which basically amounted to a couple of blokes in sad costumes and the odd garish painting around the park.

Like any attraction, the exit was out through the gift shop and after I'd had my fill of the roller-coasters, I had a look around to see what they had. And I can still remember how disappointed I was that while they had plenty of products with superheroes slapped on them, there weren't actually any comics.

There were ties and tee-shirts and frisbees featuring Elektra, the Punisher, Captain America, Wolverine, Cable and dozens of other characters, but no sign of any of the comics these characters first appeared in. No collections, no single-issues, no digests, nothing. 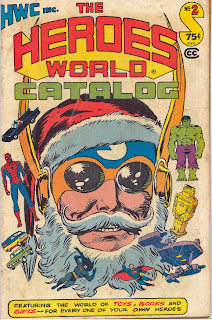 One of the reasons I like buying old comic books instead of any collected edition is the chance to see old adverts for other comics and toys and Battlestar Galactica jackets and army sets and Shaun Cassidy tee-shirts and x-ray specs. Even the most rubbish bronze age comic features a fascinating glimpse into the zeitgeist of the time, as seen through the ads.

So when I was poking about in a second hand bookstore recently and found a copy of The Heroes World Catalog #2 from 1979 – which is nothing but advertisements for all that shit – I had to get it. It was a comic book-sized catalogue produced for the Heroes World chain of comic stores, edited by big Joe Kubert, and put together by his students of the day, (including Tim Truman, Tom Mandrake, Ron Randall and  Jan Duursema). Oddly, there are very few photos of the products they are trying to flog off, probably because photos never produce well in comic book newsprint – most of the ads have some kind of original art and some book covers are actually redrawn for the catalog

It is a fascinating object, produced just after the first Star Wars film, at a time when everybody saw how much George Lucas raked in on the merchandising rights, and tried to get a piece of the action, with all sorts of toys, lunchboxes, underoos and primitive electronic games, featuring all the major superheroes and other examples of 1979 nerd culture.

Unfortunately, this rush to cash in on the vast new market for geek merchandise meant that comics were pushed out of the way. In this 44-page thing, just half a dozen pages – right at the back – are reserved for actual comics. There are more pages devoted to wheeled toys than the actual things where those characters were created, developed and grown. 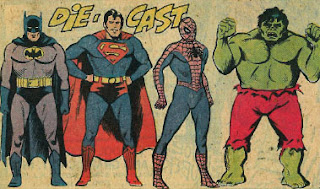 And who can blame them? There is always more money in toys than comics, and it has probably always been that way. There has been all sorts of cheap merchandise produced in tandem with comics ever since the Golden Age, much of which now commands collectors prices that are as high as the contemporary comics, and comic creations that somehow strike a chord with readers are soon used in a hundred different products, in a hundred different ways.

This focus on product over story certainly worked for Heroes World – in the years after this catalogue was produced it grew to become the third biggest distribution company in the country, before a spectacular destruction at the ham-fisted hands of Marvel (which almost took the entire damn comic industry down with it).

There is still plenty of money to be found in the comic business – there are hundreds of new comics being published every month, and no comic that makes no money lasts very long at all, so there are plenty of profits in comics. But those profits pale into comparison to the money they can make on spin-off products. Movies might be the ultimate merchandise, and Marvel's extraordinary box office success over the past few years made it the multi-billion dollar behemoth it is today. 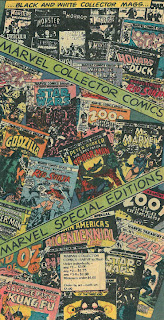 When Disney paid that billion-dollar price for Marvel, the one thing it kept banging on about was the character bank it had purchased, snapping up the rights to thousands of Marvel characters (the fact that most of these characters were of the level of, say, Red Raven or Blastaar, was mostly overlooked.) The actual comics didn't really figure into it. It was all about the copyright.

I'm still half-convinced that one day the people who make the real money in these companies will decide that the ridiculous over-saturation of DC and Marvel comic product is doing actual harm to the character, with too many sub-standard stories diluting the value of its brand, and that they will ensure the comic lines - as we know it – are ended.

I'm not convinced that this is necessarily a bad thing. 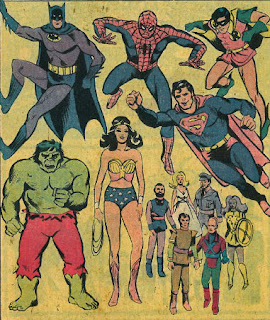 I'm not even saying that merchandise is an inherently evil thing - I'm partial to the odd toy or tee-shirt, although I never go overboard with it. But what is undoubtedly bad, and shameful, and just plain mean, are the deals that ensure comic creators – the actual people who come up with the ideas that generate so much profitable merchandise – are frequently squeezed out of the benefits.

Marvel and DC have both lost many of their best creators thanks to arguments over merchandise - Alan Moore was legitimately pissed about editorial interference and proposed classifications systems in his final days at DC, but those Watchmen buttons were the last straw.

But the companies will keep screwing the creators over. drowning out cries of outrage by stuffing $100 bills in their ears. Because that's where the real money is - not in floppy comics that barely register in modern culture, but in products and spin-offs that garner huge cash returns. Like it or lump it, it's always all been about the merchandise, and that's unlikely to ever change.
Posted by Bob Temuka at 7:28 PM

Those old Heroes World catalogs were delightful things, and I was just as happy buying one of those when it showed up at 7-Eleven as buying a "real" comic book. It wasn't so much that I wanted the stuff... I did want some if it, of course... I was too young to understand why they could charge $75 for Neal Adams drawings... but the catalogs were fun to read, off-model art and all. A Sears Wishbook written just for me.