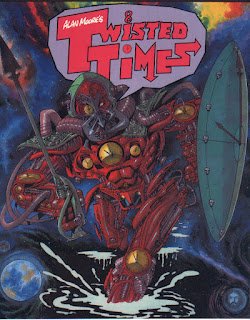 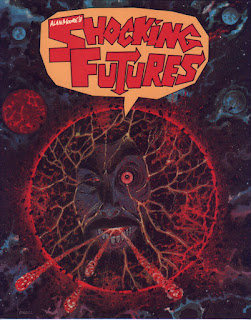 The Twisted Times book was the only Titan album that I actually bought in the 1980s. They were usually thunderously expensive and rare as hell, but I found these two absolute pearlers - collecting the best of Alan Moore's Future Shocks and Time Twisters - in a Dunedin bookstore shortly before it closed, about 30 years ago. They were in the bargain bin, and going for $5 each, which was still a lot of money for 1989 Bob. So I could only get one and went for the Twisted Times book, mainly because it had all the Abelard Snazz stuff, and that was seriously the funniest fucking shit when I was 14. It was still hard to pass up that other book, especially when O'Neill's cover might be the best portrait of the bearded writer ever produced. The one I did get is still there on the shelf, two metres away from where I'm sitting writing this right now, and I swore I'd complete the set if I ever saw the Shocking Futures book anywhere else. But I never did.