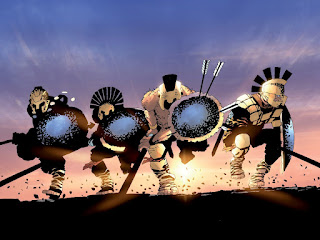 A new Frank Miller comic was once a Event for the entire medium, and all anybody would talk about for months afterwards. The comic fanzines and pro magazines went apeshit for everything he did for more than a decade after he took hold of Daredevil, and with good cause, because his comics were stylishly innovative, surprisingly witty and deadset iconic.

He burned off a lot of that goodwill over the past few decades – turning off any sensitive readers he had left with the unrepentant misanthropy of the Sin City comics; baffling the fanboys with the dayglo DK2, and driving away the last of the cool kids with the unmistakable Islamophobia of Holy Terror. The third Dark Knight series - published in the past few years - was fast food comics, and nobody cares enough about fast food to write anything about it. (Well, almost nobody.)

So now, after years and years of promises, Miller has finally produced a sequel to his massive 300 comics, and nobody really cares. When it was first announced, about the only thing people had to say about it as that Miller was obviously an idiot, because he didn't know that the era of Alexander the Great was nowhere near the time of Xerses, but he was talking about a direct succession.

Fortunately, the lack of any real attention really highlights the fact that Miller doesn't give a fuck what anybody thinks, and can just go crazy with his comics, and his latest Xerses comic is just glorious, beautiful nonsense.

It's all over the place, setting up another tale of brave Greeks facing formidable Persian odds, and then abandoning that to flash backwards and forwards through the life and death of Xerses for a while, before then leaping forward to the end of his line. It's barely a coherent story, lacking the ultra-tight focus of his 300, and even making fun of the Spartans from that story for their humourless efficiency.

But the new series is still amazing comics for the spectacle, and the strangeness of it all, and its absolute refusal to adhere to a predictable three-act structure. There is still a goofiness to his action scenes, with victims of deplorable violence being slaughtered with the dopiest looks on their faces, and the dark humour of ancient soldiers who don't know the meaning of mercy.

Battles are reduced to extended tableau, before the years slip away over the course of a panel. The title character, the godking bought low by a bunch of determined Greeks, flares and burns in the narrative, and is soon lost in the sands of history, his line dying out over the years. (Despite the earlier sneering about Miller's historical accounting, it does actually make sense that it ends with Alexander the Great taking over the mantle of ruler of the known world, because empires don't fall in a single battle, or even over a single lifetime, but fade over the generations.)

And it doesn't look like anything else - more than 40 years after his art was first published, and after a period of ill health, Miller's line is a lot shakier than it used to be, giving the art a delicate nature, with detailing that has usually been drowned out in heavy black ink, and reducing some pages to pure abstraction. But his figurework is as striking as ever, his usual lithe figures loaded up with baffling garnishing as they leap and strut across the page, and there is some literally dazzling colour work from Alex Sinclair - it's a bright, shiny interpretation of dirty old history.

This lack of focus and general haphazardness is unlikely to appeal to many 300 readers, and is highly unlikely to bring back anybody driven away over the years. But Frank Miller is still producing some beautiful comics pages, even after all these years, and that's always worth talking about.
Posted by Bob Temuka at 7:44 PM