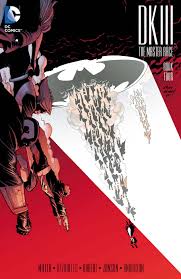 Maybe it's just the kind of people I end up hanging around with, but whenever anybody starts talking about the big fast food chains, I can always guarantee that somebody within airshot will loudly and proudly declare that they haven't had a Big Mac in years, and it's all such rubbish, and the packaging tastes so much better than the burger, don't you know?

So I get a cheap thrill out of telling them that I fucking love a good fast food burger, and can't go a month without getting some chicken from the Colonel. They're always so delightfully disgusted, but it's the truth. I like junk food. I'm thinking about pizza right now.

And I feel a bit the same way when I tell people that I quite like the new Dark Knight comic. Everyone knows Frank Miller comics are bad for you, but I still think they are fucking tasty.

The crazier Miller's comics are become, the more I like them. I fully understand how his scratchy, blocky art and thuddingly resolute plots turn off a lot of people, but that's the way I like 'em.

Even as he left a lot of faithful fans behind, I thought DK2 was bloody magnificent, and I can even find nice things to say about Holy Terror, which is generally regarded as appallingly racist and artistically lazy. And when it comes to his Spirit film, I'm with Mike.

In fact, while the name of Miller strikes terror into the heart of the hardcore comic nerd, I almost passed on the latest chapter of his Dark Knight series because I wasn't a huge fan of Azzarello or Kubert, and Miller's lesser involvement was a real detriment.

I bought the first issue, "just to see", and then I keep getting each subsequent one on the same dubious logic, so it must be doing something right. 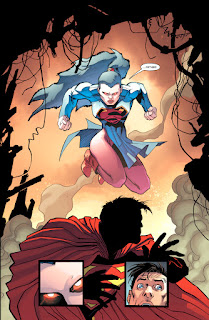 Miller's comics come loaded with baggage, and opinions were formed and set in stone, months before his latest thing was even published. There was even a load of tut-tutting over the subtitle to the series - The Master Race - which looks fairly stupid in context, because it's a story that's named after the villains, and they're a bunch of fucking space Nazis, so it's actually fairly appropriate. (Lots of stories are named after the villains, it doesn't mean it condones them. Just because something is called The Empire Strikes Back doesn't mean you're meant to like the fucking Emperor.)

Still, for anybody who is turned off by Miller's brand of deadpan drama, Dark Knight III doesn't offer much new to change their minds, and they're better off staying away altogether. 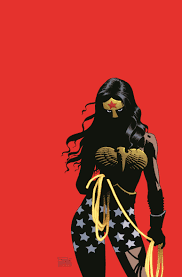 It's not the easiest comic to defend, because it's certainly lesser Dark Knight, (on about the same level as Miller and McFarlane's Batman/Spawn comic). Kubert can almost match Miller in blasts of action when he really puts in the effort, but can never catch the moodiness or inventiveness of the older artist. And Azzarello's dialogue sometimes comes off as a stale imitation of the earlier comics, with oddly dated slang and the lack of mad glee that Miller slathers across his work.

And it's hard to defend because there isn't much to really say about it. The subtext is obvious, the plot is predictable, and you get almost exactly what you expect. While certainly competent, it's never surprising, and never really sparks with genius.

In the end, the collaborative process dilutes Miller's mad, bad and crazy style, blunting the edges of his sharpest barbs. While Miller has got real rewards from working with other talented artists like Sienkiewicz, Gibbons and Darrow, this latest example of storytelling by committee inevitably leads to blandness, and when you're dealing with such a distinctive voice like Miller's, there really doesn't need to be any more voices in the room. 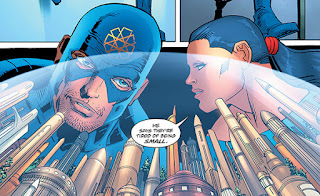 And yet, it still rocks along and isn't painfully boorish, like so many other superhero comic books out there. It's also been DC's biggest book every month it comes out, which suggests that there are more readers than just those who want to see an artistic train-wreck.

There is still interest in this world, and it's still really nice to have a comic that doesn't cross over into nine other titles, or gets high-jacked by the latest line-wide DC mega-crisis. (The recent one-shot which revealed the fate of Robin was the extent of the spread, and could be easily ignored.)

And even though Miller gets the blame for gritting up everybody's favourite super-heroes, his vision for them in later years has been drastically optimistic - these guys always work their way out of a problem. Ray Palmer's Atom is a pretty gullible goofus, but can still think his way out of a ultra-scientific trap, and there are a host of old and familiar faces ready to put on the tights, capes and boots and stand up to the bad guys, one last time.

And the mini-comics embedded in easy issue come with short bursts of art from other A-grade talent such as John Romita Jr and Eduardo Risso, and that's always welcome. Miller's own small efforts, doing the kind of short, sharp shocks that he started out on in the 1970s, are still an acquired taste, but they look fine to me, and a lot more rounded and solid than expected. 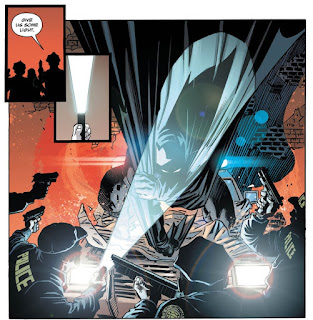 The lovely wife and I have booked  a table at a restaurant in Brooklyn with three Michelin stars next month, which should be killer, but I still think the sauces in MacDonalds burgers are exceptional, and I want to see what KFC in Iceland tastes like, and I always enjoy the efficiency of any good fast food operation.

I can dig the most abstract art comics, but I also love thrilling super stories, and they're both tasty in their own unique ways. It's all part of a balanced diet, right?
Posted by Bob Temuka at 4:17 PM