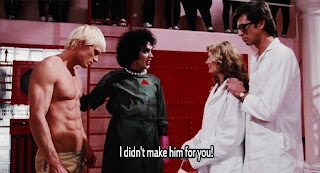 It took me an embarrassingly long time to realise that everything wasn't made for me. That every form of every entertainment didn't have to appeal to the tastes of a working-class piece of white trash on the arse end of the world who reads a lot. That everything that didn't appeal was rubbish, and everyone who liked it was an idiot.

I'm still ashamed that I didn't figure this out until my mid-twenties. I found a video tape full of the shitty, shitty home movies my mates and I used to do in Temuka in the early 1990s, so I've been wallowing in flashback fever every time I hear my voice, and I really wish I could go back and slap the shit out of my dumbarse younger self, who fucking thought he fucking knew fucking everything.

I'll still never pay good money to see a Transformers movie, I don't understand My Little Pony and I remain baffled by the continued existence of Coronation Street, but that's okay, because they're not made for me. They're not inherently awful, just because I don't get them. And it's not like there isn't still a fucking shitload of other stuff directed right at me, and more every year.

I just can't believe I used to sneer at other people's passions, and I always apologise to anybody that I did it to, back when I was young, dumb, and full of bullshit.

It's been a while now, and I've shoved that all embarrassing behaviour right into the end corner of the cupboard of secret shame, underneath the staircase that goes nowhere, down the back of the Tearoom of Despair. It can stay there.

You can like what you like. There is no shame in it.
Posted by Bob Temuka at 3:07 PM