The ABC Warriors: Time is a flat circle 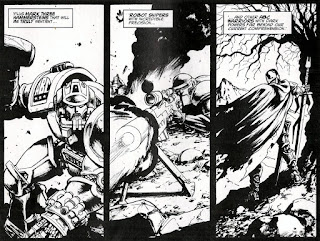 The mighty Pat Mills has been telling the adventures of the ABC Warriors in 2000ad for decades now, with the story sticking to the same core cast of robotic warriors, while also evolving in strange new directions.

Mills' ABC saga has had several iterations, while always remaining absolutely true to the writer's themes and ideas - the original Ro-Busters stories were a savage metaphor for the persecution of the working class, the Warriors got all Khaotic in the late 1980s and 1090s, and the characters are still trying to increase the peace in current issues.

The Warriors are a bunch of violent robotic crusaders, but there simplicity means they can handle a huge variety of stories, and Mills has always been a fiercely inventive writer, only too willing to take them to new places.

It has helped that there has been astonishing art on this story over the years - comic masters Mike McMahon, Ian Kennedy and Dave Gibbons defined the personalities of their robotic cast in the early days, Simon Bisley showed the world what he could do with his sleek, oiled and muscular efforts a decade later, while Clint Langley's mecha-gothic fumetti are a perfect fit for the modern era.

But it's always been Mills' story, and in recent years that has branched out in some odd new directions, while spiraling back in on itself at the same time - recent issues of 2000ad ended up telling two ABC Warriors stories at once, from both ends of the characters' histories. It's the sort of thing that could only work in a long-running anthology like 2000ad, while high-lighting the writer's great versatility. 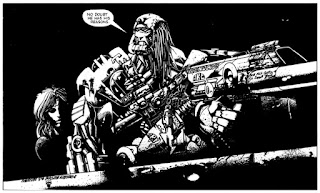 A few years ago, Mills returned to the Invasion storyline that was in 2000ad's very first issue with Savage, telling a far grittier and more political story of an invasion of Britain. The title character is still a complete nutter with a shotgun, just like he always was, but has ended up blasting away at the entire military-industrial complex as well as the hapless Vogan grunts. The most recent volumes have seen the way the ABC Warriors were introduced to the world, right up to specific characters like the dastardly General Blacklood. This is where their eternal war begins.

Meanwhile, in the very same issue, Mills and Langley are dealing with the same robots thousands of years in their future, where after many, many adventures across all of time and space, they are starting to turn on each other, as if it's the the logical conclusion to their never-ending efforts to make the universe a better place. The two stories even feature the same character in the odious industrialist Howard Stark, shortly after his human body has been destroyed and his brain shoved into a robotic body, and years later, hoarding gold after spreading his greed across the galaxy.

It's a fascinating way of telling two new stories, the kind of storytelling you can only have with the longevity and flexibility of something like 2000ad. Even though they feature the same characters, the Savage and ABC Warriors strips are dealing with totally different themes, styles, ideas and goals, while still being part of the same mega-story Mills has been telling since 1978.

Mills comics are as cleaver and intelligent as they have ever been and he's still a writer who has never met a pun he didn't like - his key duo is named after the world's most famous musical creators. And after all these years, he's still incredibly inventive - there is a plot device in Savage which is used as both a torture instrument and an explanation for the sudden explosion in sci-fi concepts in the world, while still remaining true to the gritty vision of the author.

After all this time, it's still brilliant to see Mills can still come up with new ways to tell his stories, and his strips remain a vital ingredient in 200ad's ongoing success. He's not stopping anytime soon - the writer is pumping out both factual and fictional histories of the modern British comic scene, and there have been promises that a Joe Pineapples series by Bisley is on the way (although very, very slowly - and Mills still isn't afraid to mix everything up, and tell the same story from both ends. 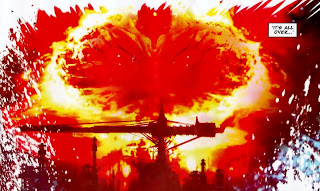