Love and Rockets: All those years ago


It's not hard to find examples of the undisputed brilliance of Jaime Hernandez's art - it's right there on the page in every new issue of Love and Rockets.

There are a couple of moments of quiet genius in the recent third issue of the latest volume of this exceptional comic, and they could only have come from an artist who had been deepening and enriching his ongoing story for decades.

If you're telling that kind of story, and you need to evoke a distinctive time and place - say, a California drug dealer's pad in the early eighties - you can do it with faint echoes, rippling down the years, without writing a word. You just do it all with body language and positioning.

Look at this, a panel from Jamie's magnificent Tear It Up, Terry Downe, from Love and Rockets v1 #28, where the title character of that wonderful short story arrives at the house of Del Chimney, back in the days before he got crucified on his floor. 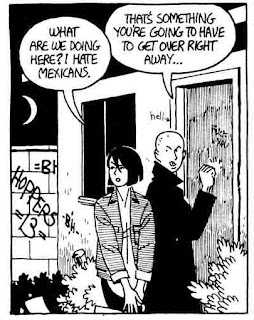 That was published in 1988, but it's so slick and modern, it could have been yesterday. And it kinda was, because here's a panel from the most recent issue, published just a few weeks ago: 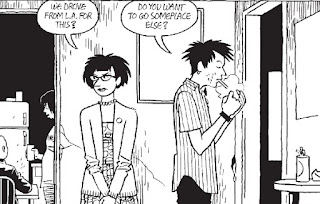 It's not just a callback, the two scenes are roughly taking place at the same time period, and feature a female character who doesn't want to be there, being ignored by some douchebag.

Without having to belabor the point, without having to explain every damn thing, Jaime takes the reader back to that place, showing that some reactions are universal, and filling in the background of his beautifully sprawling saga.This isn't just easy nostalgia for the 'golden age' of L&R, this is making it clear that it's all the same story.

And hell, if you are filling in things like that, why not take a single panel of Hopey at her young punk best from a mid-eighties strip - 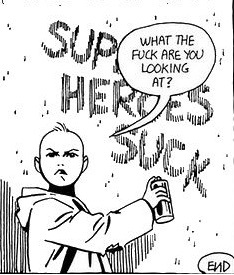 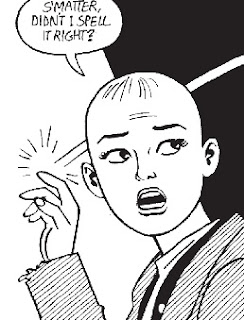 This is just great comics, operating on a level that spans generations, offering new insights on old events, and giving the entire thing more depth than you could ever possibly expect.

Love and Rockets: All these year later, and still just better comics than anything else out there.
Posted by Bob Temuka at 7:53 PM