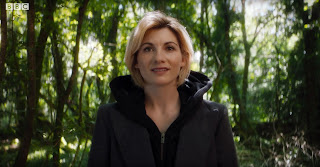 The new Doctor is always the best Doctor.

Soon after it was announced today that Jodie Whittaker would be taking on the lead role of Doctor Who - and becoming the first female actor to do so - my local newspaper had a story up on its website saying that the decision had divided fandom, with hordes of man-boys crying into their cornflakes over the move.

If there is one benefit to living in a bubble created by social media algorithms, it's that I didn't see a single person complaining about the change, they were all 100 percent positive about it, and so am I. Even the people who didn't give a shit about the show were grudgingly happy that it was trying something different. Even one of my very best mates, who has been decrying possible femininity in the TARDIS for years, is a big fan of Whittaker's work, and is now excited about the possibilities.

(Okay, I did see a shit tweet from Ian Levine, retweeted by a incredulous friend, but Ian Levine is a contender for being one of the very worst people in Doctor Who fandom ever, so who gives a damn what he thinks?)

Overall, by far, there was a positive reaction, probably because it's a fundamentally decent and right decision. Doctor Who has survived this long by changing for the times, and this change has come again, and not a moment too soon. A female Doctor opens up all sorts of new storytelling possibilities, is empowering for a significant part of its audience, and takes the show into unexpected territory. Why would anybody ever complain about that?

Even though the programme isn't going to fundamentally change - there will still be loads of bonkers adventures in space and time, with a central figure is never cruel or cowardly and is just as strong as she ever was - this is something new for the 54-year-old  show, and that is always, always welcome.

Doctor Who fandom has had a huge and welcome influx of girls and women over the past decade, and it's only right and proper that they get some proper representation on this silly show. The future belongs to those 10-year-old girls geeking the hell out on YouTube, and it's about time they got a decent role model like the 13th Doctor.

Of course, it would be nice if these kinds of announcements actually took place in a story, rather than an oppressive PR blitz, but the video announcement of the new Doctor was a powerful statement of intent, and the thrill of the new and different.

I'm delighted to stay along for the ride.
Posted by Bob Temuka at 11:40 AM