Terror, gore and the best horror on the newstand


The magazine format had a good, long run as one of the world's premiere media formats, but they're just not the mass medium they once were. But some specialised, niche publications can still find an audience that can last a long time, and are, somewhat remarkably, still out there on a fairly regular basis.

It is with considerable happiness and no small admiration that I note that two of the nastiest, goriest magazines I've ever read are still out there, still educating new generations of horror fans, and still showing lurid pictures of some fucked-up film gore. 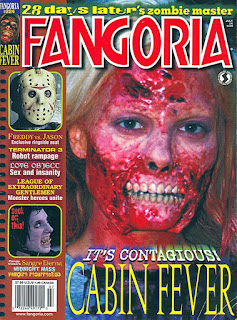 When I started working full-time and earning my own money in the early nineties, before I developed a crush on the Empire movie magazine that is still going on every month, my two favourite magazines in the world were, undoubtedly, Fangoria and The Dark Side. One from the US and one from Britain, and both devoted to all things horror.

They were addictive reads, especially since I'd been a total horror hound throughout the teenage years, watching dozens and dozens of movies on video tape, tracking down the most obscure shit, and staying up late on Sunday nights for a glimpse of something scary and new.

All that horror, and there were still some things I could never find - it took me forever to track down all the decent Hammer films, and it would literally be decades before I could track down some of the weirder, more esoteric stuff. There would be thrills in finally tracking down something as monumental as the original Last House On The Left, or even something as obvious as Driller Killer.

It's all on YouTube or easily downloadable these days, even some of the most obscure nonsense, even stuff that was massively controversial back in the day, but that just takes the fun of the hunt out of it, really. 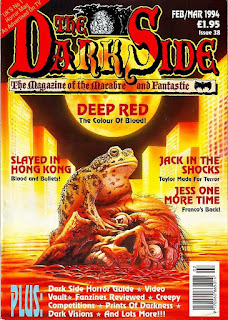 But in those pre-internet days, when it came to reference books and general writing about horror films, pickings were slimmer than a desiccated, devoured corpse. There were a couple of big, glossy hardback books that I ate up, and would read and read over again, fascinated by details of German somnambulist nightmares of the silent era, or the strange shifts in tastes and tolerances over the decades, or the gruesome tiny details of modern slasher films.

As in-depth as these things could be - and they could go pretty fucking deep - they were still trying to cover a century of scary movies, and there were literally thousands and thousands of films in the genre. They couldn't get to them all, or would only have the most perfunctory information.

But monthly publications always had lots and lots of pages to fill, and while that kind of immediacy meant they were always bound to the whims of the latest news about forthcoming nightmares, they could also provide a long, dark look at all sorts of horror, from all sorts of eras. 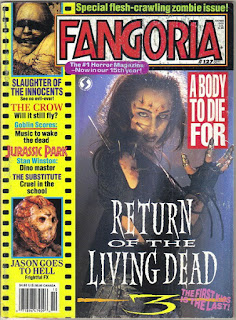 Fangoria was, unsurprisingly, the slicker product, full of Hollywood madness and big budget make-up effects. But the best parts of the magazine were always when it took detours down the grimy, sleazier parts of the US film industry, covering movies with breathless enthusiasm that would never be heard of again, often not even good enough to get a DVD release.

And it could also, for a magazine available in respectable newsagents all over the world, be exceptionally gory, showing the gruesome fates of cinematic victims in wide-eyed glory. For close-ups of the sheer artistry of Tom Savini and his chums, you couldn't beat the Fango.

That devotion to the gruesome actually meant the magazine always had a wide net to cast, and it could cover things that weren't strictly horrific, like SFX-laden blockbusters and violent crime sagas - Fangoria was the first place I ever saw talking about John Woo films, in David J Schow's amazingly insightful Raving And Drooling columns. 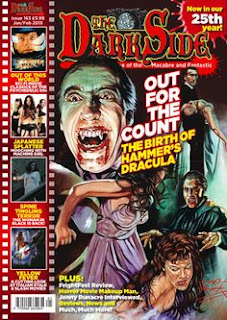 Over on the other side of the Atlantic, The Dark Side was a bit grottier and grosser, with more of a love for Eurotrash filmakers like Jean Rollin, Jesus Franco and a horde of other dirty old pervs behind the camera.

Even better, while it had plenty of news and reviews of all the latest terrors, The Dark Side was more focused on history, with some long features on stuff that was amazingly obscure, and definite articles on super-nasty Italian zombie epics.

For a long, long time, it also had an invaluable A-Z review of every goddamn genre film ever made, which was incredibly comprehensive, issue after issue, taking months just to get through the 'C's. 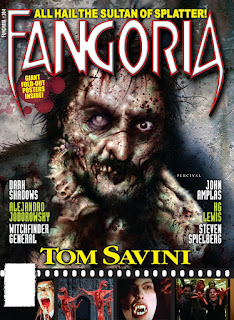 It wasn't just these two magazines, they were just the biggest, and the most consistently entertaining and informative. There have, of course, been all sorts of other magazines and publications about horror films, long before these publications first came out, and even more in the years since. (Famous Minsters of Filmland is the most obvious example of this, and keeps getting resurrected more often than Dracula, but it was never my magazine of choice -  I just couldn't take the truly horrific puns.)

Some of them were more focused on the gore side of things, or were purely all about the VFX, and they could be good enough, but none of them ever had the charm or longevity of these two magazines. Most of them were wiped out as the audience migrated online, to discussion forums and Facebook groups, the community expanding far, far beyond the confines of the printed letter page. 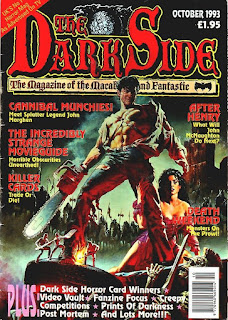 You never really grow out of a love of horror films,  but you can get too old to be that obsessed about them, and I haven't bought Fangoria or the Dark Side regularly for 20 years now. But they're still out there, even in this mediapocalypse, even in this age of social media and apps and hot takes.

They might not be as regular as they once were, but they still show up in my local newsagents every few months, and I still get the odd issue, just to check in on the scene, and see some gross new thing I've never heard about anywhere else, or a new write-up on the secret lives of horror auteurs.

When it comes to movies designed to scare the shit out of you, or at least make you feel a bit queasy there is always something new to look forward to, and always something old to revisit. And one of the best places to find them is in the pages of the magazine.
Posted by Bob Temuka at 1:32 PM