What is the Tearoom of Despair?

The Tearoom of Despair was an inter-dimensional prison that first appeared in Grant Morrison's Doom Patrol comic, and anybody unfortunate enough to look into the sleeves of the Men from N.O.W.H.E.R.E. was sent there to languish in an old-school cafe that came with a menu of oblivion.

It's a world of horror, futility and endless buttered scones.

It's also the ongoing blog of Bob from Temuka, who uses it as an excuse to get all sorts of bullshit off his chest, and does this by rambling on about comics and movies and TV that nobody else really cares about, interspersed with embarrassingly dorky pieces of autobiography. It takes a high word count to justify the nerdiness sometimes.

This is the blog's eighth year, and I'm still not running out of things to talk about, even if it isn't always as easy to muster the enthusiasm sometimes, and I end up filling up a month with music videos, like an MTV hack. But there is always some daft observation of Legion of Super-Heroes fans to make, or comparisons to draw between the different versions of Luke Cage, or a thousand other dumb topics.

I'm starting to get worried that this might never end. 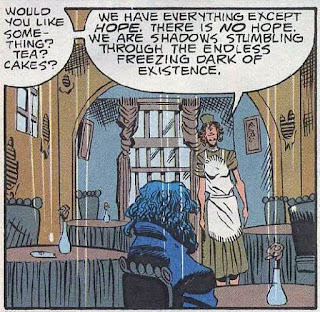 Look, I really do believe it is mentally healthy to get all this rubbish out of my skull and down into hard letters. I truly think I sleep better because I just get it out, and don't spend long hours in the night worrying about Geoff Johns' toxic influence on modern superheroes, because I've already moaned about it often enough. Now I can spend that time on more constructive activities, like worrying about dread oblivion and the howling nothingness of the void.

One time, Eddie Campbell said I was right about some point I made about Cerebus the Aardvark, and I could have just died. I should have shut the whole thing down right there. 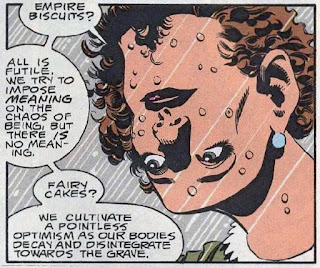 I try to keep politics out of it, partly due to general and tragic disgust at the overall global political scene, but mainly because I can't solve the clashing of political ideologies inside my own head, so how could I expect to solve them in the state?

For the record, I'm a horrible mess of anarchic socialism, where I want to smash the state, but don't mind paying high taxes to help my fellow man. I have a hard time finding anybody to vote for, with that kind of specific criteria.

Even so, I would have voted against Trump if I could have, because fuck that guy. America is being such a fucking bully right now, and I'll try to explain why that's so bloody disappointing later in the week. 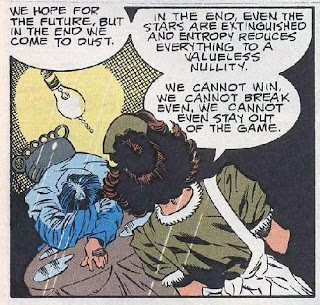 Mostly the Tearoom of Despair is a place where I write about comic books, and the disproportionately profound effect they have had on me over the years.

You can't get that same kind of frenzied styling and intense storytelling in anything else. Besides, I've got thousands of the fucking things, so there is always plenty to write about. 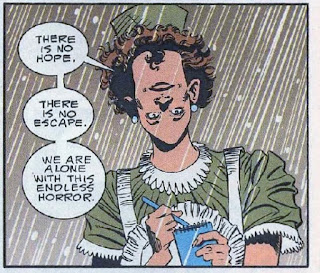 One of my best buddies recently tried to start a blog about her thoughts on movies, but didn't really get going because she couldn't get the words of the screen to match the words in her head.

I had no useful advice. I'm still appalled by my terrible sentence structure and disgraceful grammar. I blame my English teachers at school, who were so busy asking me how I felt about things, they never taught me the bread and butter of nouns and adjectives and adverbs and all that.

But I keep on rolling, and try to put up something new here a couple of times a week, even if it's nonsense. That 10,000-hour thing, where you become some kind of expert after a long bout of industry – has got to kick in soon. Right?

I'm genuinely sorry for all the clumsy metaphors and incoherent viewpoints. I don't really know what I'm talking about, and I can't stop.

If you've ever read one of my blog posts, and made a quiet grunt of approval or agreement, I love you, unequivocally and completely.

This is the Tearoom of Despair. It goes on a bit.
Posted by Bob Temuka at 3:50 PM

Yep, I often make a quiet grunt of agreement when I read your posts. I've been popping by for a few years now on and off & it's always reassuring to find someone else on the same sort of wavelength. Keep it up!

Yep, it's been one of my favorite blogs for years. I like most of the same stuff as you and in particular I always look forward to your writing about 2000AD. I don't think it's at its best at the moment, (it never feels quite right when there's a prog without a story by Mills, Wagner or Grant in it) but I'll continue to support it through all its ups and downs in gratitude for all the fun it's given me over the decades...

I have to say I thoroughly enjoy reading your blog too. Been popping by for a couple of years now, and dropping the occasional comment. There is lots I agree with, and we have a crossover in tastes. Although I have never got on with Love and Rockets, maybe I haven't tried hard enough, maybe it's just not my cup of tea. I always enjoy your point of view, even if it's something I'm not familiar with, most of the films and aloe of the tv, for example. I am always disappointed when we get a month of videos and no words. As long as you keep blogging, I'll keep reading.
Mattb

I've been following the blog for over a year now, it's great.