Monsters like Dracula and Frankenstein are eternal, but even as their stories are often stylish and moody and occasionally beautiful, they're very rarely genuinely scary.

All that gothic shit - the castle up on the hill, the upper class characters' struggle for repression - is a lot of fun, but they weren’t terrifying, or even unsettling. They were just fun.

Scary came along when the horror went into the suburbs. 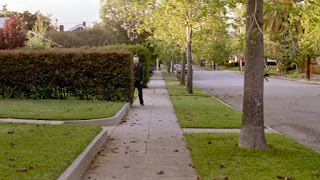 American TV anthologies of the 1960s and 1970s certainly found plenty to feel queasy about in the back yards and silent streets of suburbia. Loads of Alfred Hitchcock’s macabre crime stories took place behind the closed doors on the fringe of a city, while the science fiction nightmares of the Twilight Zone and deeply creepy scares of the Night Gallery often set stories in the same stupefying and dull worlds.

The big budget movie scares of the 1970s - the truly terrifying Exorcist and the gross deaths of The Omen -  still took place in worlds of high diplomats, and where parties featured famous astronauts hanging out. But the cheaper and nastier side of the film business started to find new terrors lurking in the suburbs, and by the mid-seventies, babysitters and moms on their own were a common target of maniacs and psychos. This wasn't the rugged landscape of Transylvania or the vast British moors, horror movies were taking over the streets outside the window. 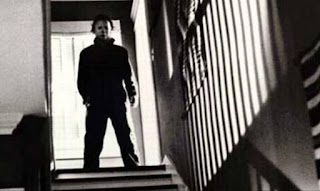 It didn't start with Halloween, but John Carpenter's masterpiece set the template for the whole sub-genre. The arrival of Michael Myers is signified by the empty streets, silent nights and sinister breezes in the trees. He stalked through the dark gardens and killed teenagers whose parents weren't home, because they had their own middle-class neurosis.

Sure, the suburbs were boring, but they were safe, far from the blight of inner-city crime and rural creepiness. This was happening right outside the fucking door, in the kind of places where this shit did not happen.

And for the vast amounts of people in the western world living in a town just like Haddonfield, this could be genuinely unsettling in a way the old gothic horror never could be. 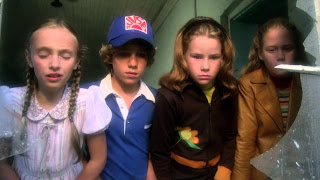 When I was 10 or 11, my big sister and I watched Prom Night, one of the innumerable Halloween rip-offs that filled video store shelves in the mid-198s0s (and this one had the mighty Jamie Lee in it as well). There was already a crawling uncertainty that something like a slasher film could happen here, in our own boring little town, and right at one of the tensest moments in the film, there was a sudden, savage knock on the window right behind us, and I swear I genuinely almost shit my pants in fear.

It was just my half-cut Dad, who had left his keys inside, and was coming home with Mum from the local Town and Country Club with a bucket of Kentucky Fried, but for a second there, it was all real - there really were monsters roaming the streets outside, waiting with knives and machetes and garden shears, and they were coming into our fucking living room. 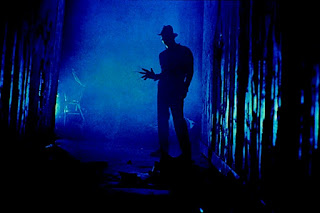 Many of the best horror films of the next decade took advantage of this familiarity to really twist the knife, and usually add something new to the terrifying mix.

Nightmare on Elm Street had the same black horror lurking beneath the tasteful pastels of suburbia, and then took that extra step further, and starting attacking the bored teenagers in their nightmares. They couldn't even get away from the crushing conformity of their world in their dreams. There was literally no escape.

Meanwhile, George Romero went straight to the heart of the suburban dream by setting Dawn of the Dead in the new town square - the local mega-mall, and splashed brains, guts and gore all across the shiny facades of the local chain stores. If the new monsters weren't coming for you in your living room, they were getting you where you shop. 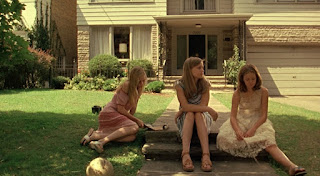 Once again, this was a huge shift in horror, because suburban life was so fucking boring, and things like that did not happen here. But they really did happen there, behind the thick drapes and huge garage doors.

Every slice of suburbia has some kind of horror stories, of some horrible mass murder, or some terrible attack, or some sad suicide. Small towns and city fringes weren't immune to this kind of thing. They didn't happen as often as they did, but that just meat they had a powerful impact when they did, psychic scars across the streets.

In this sense, The Virgin Suicides might be the ultimate suburban horror story, because it's that hypocrisy behind that blinding normality that is the real villain, and claims the lives of the unfortunate title characters. Their world didn't need a new kind of monster to show up, they were living in it all their lives. 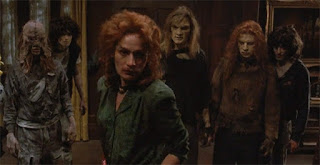 Film-makers are still going into the suburbs to find new depths of horror. The recent It Follows has that same strange mix of teens wise beyond their years, absent parents, conflicting emotions about sex, and the slow, oncoming dread of banal normality. The monsters are still out there in the tastefully landscaped shrubbery.

A tiny bit further down the social scale, and true working class horror films are still around, but often hide the dull realities of living from paycheck to paycheck beneath a scent of dirty glamour. And attempts at inner-city horror are usually embarrassingly patronising, although the odd new nightmare, like Wes Craven's People Under The Stairs, manages to stay on the right side of things.

But suburbia was supposed to be safe and dull and quiet, and when somebody starts smashing into houses with a butcher's knife raised high, it will always have an extra impact.

Whenever he was asked about the decision to strand Doctor Who on earth during his 1970s run, actor Jon Pertwee used to use the example of a yeti on a loo in Tooting Bec as more jarring and unnerving than encountering it on some far-off planet. And while a place like Tooting Bec still sounds weirdly exotic to somebody on the other side of the world, Pertwee was on to something - that combination of other-worldly horror and the mundane nature of reality is always potent.

Like so many kids of the late 20th century, my reality growing up was that dull suburbia, where nothing interesting ever happened, and everybody was nice to each other, and it was so quiet at night I wanted to scream. There are much worse places to grow up, but as scary as suburban horror stories could genuinely be, there was always a small slice of delight at the monster ripping that safe and boring world apart.
Posted by Bob Temuka at 9:24 PM