Mega-City One - the setting for the long-running Judge Dredd comic - is an incredibly vibrant, weird and dangerous place to live. There is the constant fear of nuclear apocalypse, a recent virus turned the city into hell on earth (and reduced the population to less than 94 per cent of its peak), and every now and then, Dark Judges from another dimension are going to show up randomly and slaughter a whole lot of you.

Random spree shooting are a daily occurrence, the law have awesome firepower that is frequently deployed and extreme violence is everywhere. Every now and then, there is some grand mega-epic, and Dredd saves everybody by being the rod that will not break, but millions of innocent souls are still going to die horribly.

Dredd’s world is a hard world, and you'd think it would be harder on the nice guys. But in Mega-City One, nice guys somehow finish first. 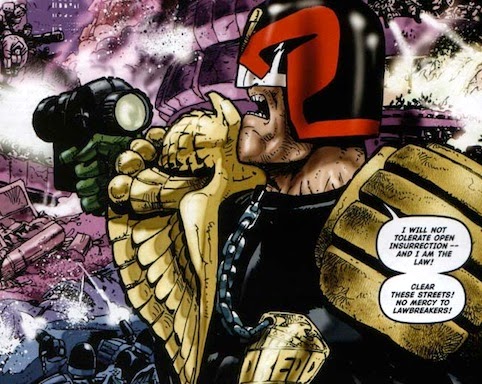 There are still plenty of plenty of nice guys who meet unfortunate ends in the on-going saga of Judge Joe Dredd. A sunny disposition isn’t actually going to save you from a hail of high-powered shrapnel, and plenty of lovely, innocent people are occasionally unceremoniously incinerated by those bloody Sovs.

Even the slightest of stories can come with a large body count, and it becomes a vicious cycle, as the insanity of the situation causes more people to snap and go futsie and go on a killing spree, making the situation even crazier, inspiring new massacres. Plenty of nice people are taking the midnight bus to Resyk.

But one of the great secrets of Dredd's storytelling success is that a whole lot of the people who do meet a messy end write their own fates – dying due to stupidity, incompetency, greed or selfishness, often meeting their maker in the form of justice from Dredd's lawgiver. 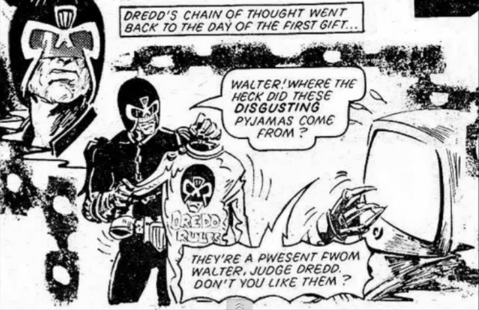 Walter is, for all his annoyances, just a nice guy, and is still there after three decades of chaos, surviving direct involvement in some of the most calamitous events. Every now and then he has a breakdown and goes a bit crazy and has to be blown apart, but he's always coming back, and all he wants to do is help somebody with the washing. (He might have finally given up on getting any affection out of Dredd himself, but he's still a great pal.) 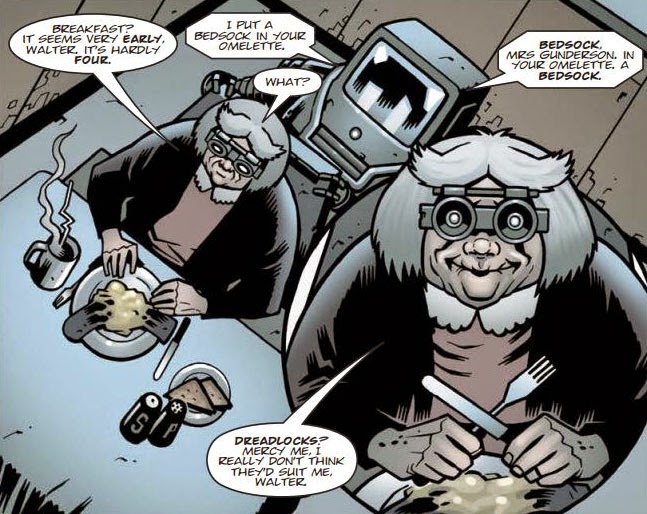 In fact, Walter might have finally found the perfect home, as he is now living with Mrs Gunderson, a nearly blind and totally deaf senile old lady, who has proven to be the single nicest person in the entire crazy city.

She is the only person besides Dredd to have had multiple run-ins with Judge Death and somehow survive – in one memorable interlude, Death had to admit she was the only truly innocent person he had ever met. She is a lovely old lady, who stumbles through scenes of terrible carnage without really noticing anything, and is always hilarious.

She still shows up in the odd episode, and is as endearingly batty as ever. Her and Walter make a nice little odd couple, tottering through the wreckage of a smashed world, wondering if they left the gas on back at the flat, blissfully surviving the world's harshest city. 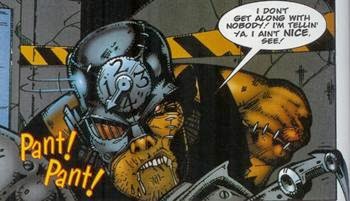 There are plenty of other nice guy survivors - Max Normal is still bopping around somewhere. The pinstripe freak might still be a little dodgy, but he always liked seeing bullies get their just deserts. He could play with the system, but was always his own man, and disappears for years, only to show up again on the far side of a shuggy table.

It's even arguable that one of Dredd's greatest foes – the great Mean Machine Angel – also survives multiple run-ins with Dredd because he's inherently nice. He's only mean because of awful surgery, and is an innocent at heart, and has been allowed to shuffle off into retirement, taken in by a caring and sharing son, another bright face in the darkness.

Even the Judges aren't exempt, with a new generation of men and women showing a more progressive side of the law. They're still judges, so they're not exactly nice, but it's notable that the slightly more flexible Benny and Rico have survived for years now.

Smiling at Mega-City's craziness is the best reaction you can have. You can go a bit far, and become officially mental, but that just gives you all sorts of metatextual headaches, so you're best off just being a bit sensitive.

It still works, even in the grim post-Chaos Day city, with a cracking story about a sensitive Klegg from Rob Williams and Chris Weston recently running in 2000ad. He might be a massive reptile with massive sharp teeth hanging around a city that was scarred on a primordial level by his kind, he's also the only Klegg to survive longer than one story.

He might risk getting accidentally shot on his way to take some books back to the library, but he endures. 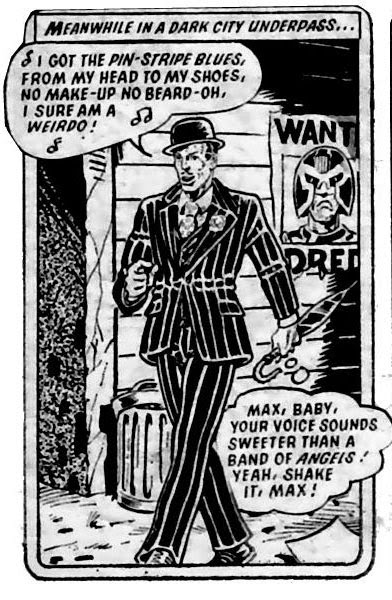 The one thing all these nice folk have in common is that they're always pretty drokkin' funny. It's hilarious to see that Klegg waving enthusiastically at Dredd, or to see Mrs Gunderson narrowly escape awful harm without even noticing.

Besides, to maintain a positive attitude in a world of such mega-death and horror is to cast a deeper light into the darkness of Dredd's world. And it's also part of that great British stiff upper lip. Keep calm and carry on, even if the world is going crazy, because going on about it isn't going to fix things.

It's a hard world, but there is no need to be rude about it.
Posted by Bob Temuka at 7:14 PM