The first time I saw somebody die in a superhero comic, it freaked me the hell out.

I can remember the exact moment – I was only about six or seven, and reading a typical seventies Superman story, with the usual ultra-solid Curt Swan art, and a couple of men were standing guard over something when the bloody Parasite flew in out of nowhere, and turned the ground beneath the guards' feet into lava.

It was all very tasteful, they just fell into the ground and their helmets were left comically bobbing on the molten surface, and things carried on. I can't remember what happened in the rest of the comic, (although I can safely assume it involved Superman punching the crap out of the Parasite), but I never forgot that bit with the guards.

It was a fleeting moment in an insignificant comic, but it haunted me for ages, the way characters could die in horrible agony like that, in a bright and colourful superhero story.

People didn’t die in superhero comics. Did they?

Of course, I was only a little kid, so I was pretty damn naïve, and there was plenty of hideous death in superhero comics. But it wasn’t as prevalent as it is these days, where any average supervillian rampage is built on a pile of innocent bodies. There were still plenty of noble sacrifices and innocent tragedy, but it really wasn’t something you often found in the simplistic and clean world of an average Superman comic.

The funny thing is, I was reading a lot of 2000ad and horror comics at the same time, and wasn’t bothered by the carnage in them at all. I didn’t bat an eye when Dredd sentenced hundreds of millions of people in East-Meg One to death, and was similarly unmoved when the dinosaurs in Flesh chomped up annoying eight-year-old boys. These victims usually deserved their fate, and lived in scary worlds where sudden death always lurked.

They lived in harsher worlds, where there wasn’t a Superman who could swoop in and save them. The deaths could be just as horrific, but they weren’t as weirdly upsetting as seeing it happen in a Curt Swan comic. 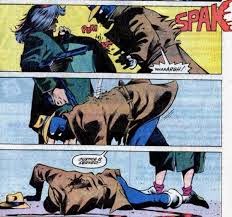 I'm not really talking about the deaths of major characters – that stopped having any effect a long time ago, and seeing a superhero die is more likely to induce yawns than thrills. It can be funny to see creators insist that they really, really mean it this time, but they always come back, sooner or later.

It's the background characters, the random victims, the Z-list characters, that I still feel sorry for. They don't get any noble resurrection, or anything like that. They're just there to show how super serious things are getting, until you get to the point today where superhero comics gleefully wrack up huge body counts. There is barely an issue of a modern DC comic book that doesn’t have some kind of multiple homicide, usually for the sole purpose of pretending that characters with all the depth of a puddle of piss are actually totally badass.

There is so much carnage, it’s essentially meaningless. Massacres that would be world-changing news on Earth Prime are a weekly event in the modern superhero universe, and it doesn’t matter.

Modern comics are full of adolescent ideas about eye-for-an-eye retribution, delivered with massive buckets of gore, and it all means nothing. What’s the point?

It was a slow process, getting from Swan simpleness to overcomplicated megadeath. Ideas of mega-violence seeped in from alternative comics in the 1980s, while major action films of that time raced to have the biggest body count. Mark Gruenwald wasn’t a weatherman, but he knew which way the wind was blowing, and he made one of the first major pushes for real superhero carnage with Scourge.

Half of the characters in the Official Handbook of the Marvel Universe: Deluxe Edition: Book Of The Dead from the late eighties were Scourge’s victims, and it was truly shocking to see a bunch of Marvel villains meet their end through Scourge’s explosive bullets at the Bar With No Name in Captain America #319.

It was so shocking, it’s been done a few hundred times since, which has diminished the effect slightly. The stakes kept getting raised, with less and less effect, until whole worlds were destroyed without mercy, and billions of people die. 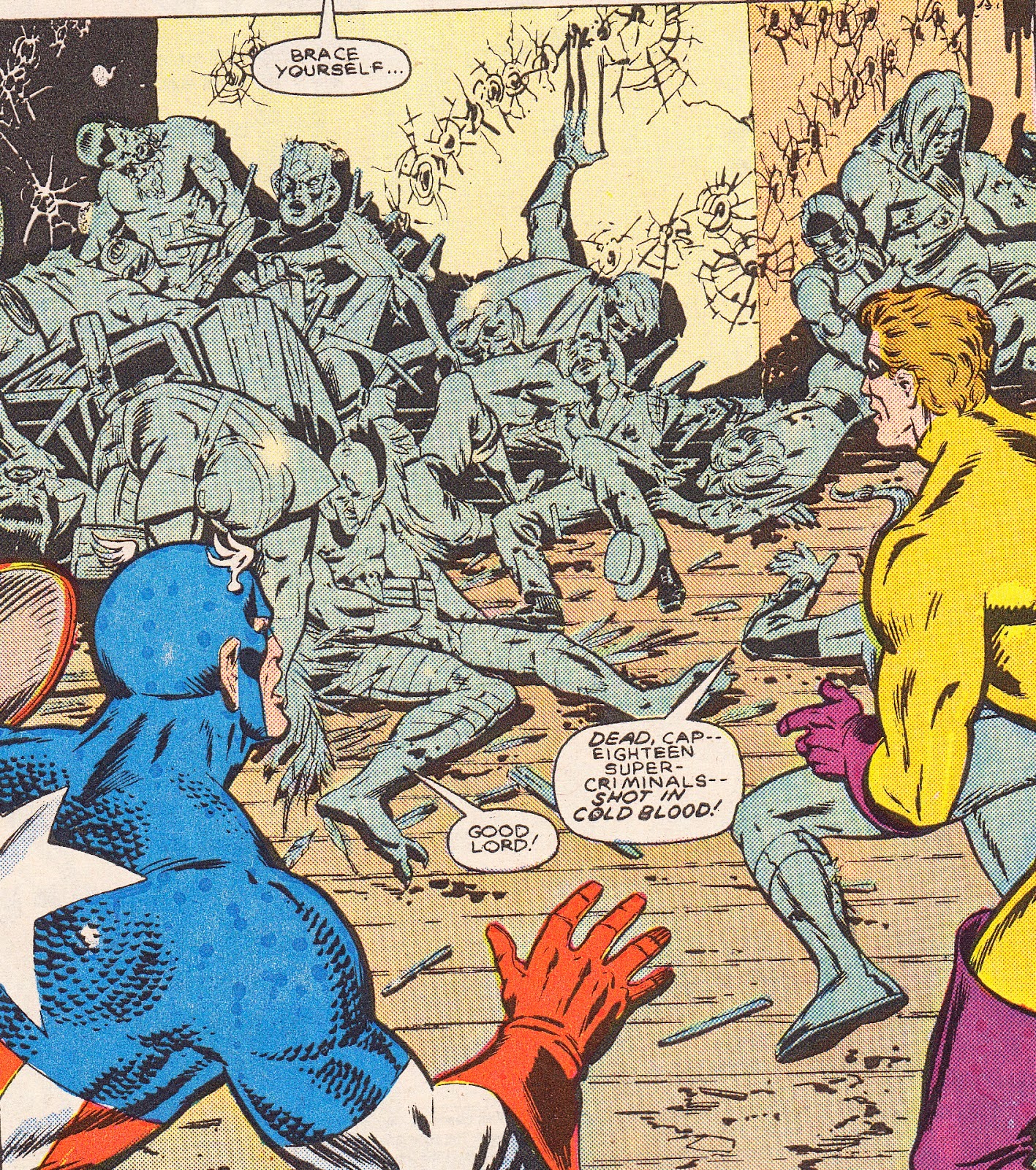 There have been hamfisted attempts to show the impact of this carnage. Following the horrific events of September 11, American comic creators took that idea and crafted storylines specifically addressing these themes of the damage left behind.

Unfortunately, this led to little more than Civil War, in which the price of collateral damage from super-brawls was shown to be just too high. The basic idea was rock solid, and if Marvel hadn't been so intent on showing that pretty much everybody involved in the entire tale was a complete dickhead, it might have been easier to see the overall point. It also didn't help that there had been plenty of other terrible super-hero related disasters that everyone just got over quickly, and it was never fully explained why this one incident was the one that caused everyone to lose their collective shit. (The death of so many children was, unfortunately, precedented.)

But since then, any idea that we could see the full impact that super-hero battles might have had has been more or less ignored, and we're back to mass devastation, without those darned awkward consequences. Worlds will live and worlds will die, but seeing the deaths of our counterparts thrown away so casually is an unimaginative and simply horrific sight. 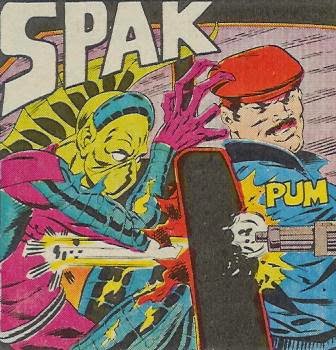 The DC Universe has a long and proud history of relying on carnage on a massive scale to move things along and give fake gravitas to the situation. Frankly, if I was a former resident of a place like Coast City, kicking back in the DC version of heaven where everybody hangs around on grassy plains looking at pretty waterfalls, I would be pretty fucking pissed that my death, and the deaths of all of those around me, served little purpose other than sending Green Lantern a bit mental for a little while.

Blowing up cities and worlds has been a staple of science fiction and super heroes for many years, and the biggest loss of life can be seen in the fatal-tastic Crisis On Infinite Earths, in which trillions of lives were lost to entropy, even if it was never made entirely clear whether these deaths actually happened, since the people involved ended up never existing in the first place.

But the sheer casualness of it all sits at odds with the much-vaunted realism of current comics. If we can have Superman break down into a teary, gooey mess every time he stubs his emotional toe, is it too much to spare a little sympathy or show some basic fucking human empathy when so many lives are casually wiped out in appalling comics like Countdown to Final Crisis, which killed billions in a futile bid to make Superboy Prime seem interesting?

After all, we can be talking about the extinction of all life on Earth, and while the DC Multiverse still has dozens of other duplicates, this does not excuse the carnage. While the few differences actually shown in the comics seem to go no deeper than the face under the superhero cowl, these worlds must surely have truly unique forms of art, literature and culture, that would be forever lost.

And the greatest tragedy must be the people themselves, the vast majority of whom would have nothing to do with super-heroes and their adventures, but who pay the ultimate price for them. 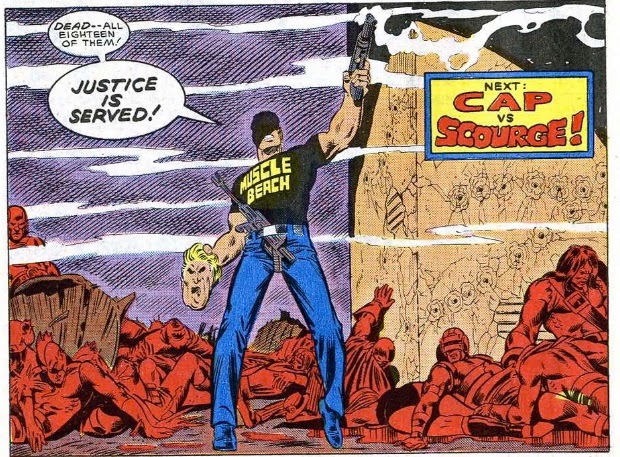 And the weird effect of all this is that the carnage just looks lazy. It's easy enough to have a room full of people machine-gunned to death in a random Batman comic, but when they're all doing it, it's just boring.

There are better ways of raising the stakes and intensity in a superhero comic. And if they cut back on the carnage a bit, to the point where it is shocking to see people die, it might actually mean something.
Posted by Bob Temuka at 6:56 PM