It's been an exceptionally busy week, with thousands of comics (and assorted other shit) that had to be moved into a new house, and I really don't have the time or energy to write anything new, so here's a repeat of a post about moving that I wrote the last time we shifted house.

To be honest, it's going to be an exceptionally busy month, and content at the Tearoom of Despair will be almost exclusively reprinted stuff for the next few weeks. Sometimes life just gets in the way of blogging, you know?

Things will be back to normal, with the usual regular nonsense, next month.


The lack of activity at the Tearoom of Despair over the past week can be blamed on one simple fact – we had to move house, and even though we were only moving a couple of blocks down the road, it was a hell of a lot of work.

It would have been a hell of a lot easier, but this was never going to happen. I look at all those boxes I’ve now got piled up in the new spare room, full of all this crap, in stacks that are taller than me, and I love it all, more than ever. 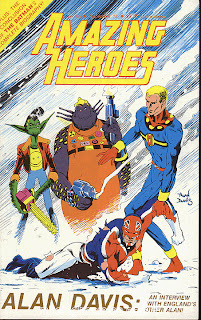 Every time in the past few weeks when I told somebody I was moving, they would lurch into immediate sympathy mode, usually followed up with some horrific moving story of their own. Which means there must be something wrong with me, because I actually really like moving.

Okay, I could do without some of the back breaking labour of actually shifting these things. While it is decent exercise and can give you guns of steel, I also ended up with scrapes and bruises all over my body, in the oddest of places. It’s taken three days for my arms to stop aching, and all that labour killed the appetite, leading me further into the Realm of the Unwell.

But it’s worth it. I truly love the sorting, the organising, the opportunity for new display options, the excuse to have a dig through those forgotten boxes in the bottom of the cupboard, and find old issues of Amazing Heroes I didn’t even know I had, or old diaries that still make me laugh, or videotapes full of esoteric bullshit.

I like the opportunity to take stock, but because I’m a lazy bastard, I never end up doing it until I absolutely have to. You can’t put it off dealing with this stuff any more when you have to shift it. And you never know what you’re going to find. 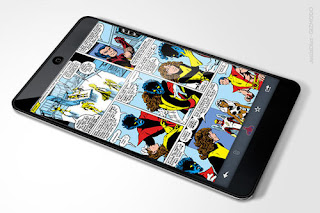 During one of the recent excellent Group Think things Tom Spurgeon does on The Comics Reporter, he asked readers to chime in with their thoughts on digital comics, and what they actually wanted, and what they would pay for digital stories.

I didn’t participate, because I would have been that wanker that rains on everybody’s dreams of the future. Because I wouldn’t pay a single damn cent for a digital comic, but happily spend thousands of dollars every year on print comics. I have absolutely no interest in comics unless I can have the paper to flick through.

Even though I try to kid myself when I say I’m all about the story, I do have a real fetish for the printed page that looking at something on a screen never, ever satisfies. (Plus, y’know, technology hates me, and digital devices can fail in dozens of ways that a book never will.)

But one of the things that genuinely surprised me about the comments left on Spurgeon’s roundtable was how important space was as a consideration. Many people appear to have switched to digital comics because the act of storing them is just too hard.

I never thought of it as work. Whenever I’ve moved house, I’ve never asked anybody else to move the boxes of comics, because they’re my responsibility. (If they keep offering, I’m not going to say no, though.) They’re all mine, and if they have to be moved to a new location, than I’m the one who has to do it. 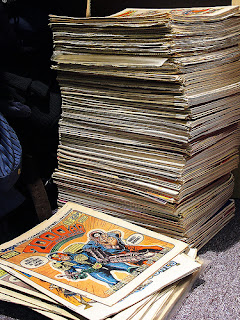 There are still a lot of boxes – my 2000ad collection alone fills nine full banana boxes – but I can fit them in a couple of carloads, and it’s never that much of a bother. I get so much enjoyment out of all these things, it’s worth a little effort. And pain.

There will always be an issue of storage space, especially when we’re moving into another small-ish flat, but I’m efficient with my space.

I have two sisters, so when I was growing up and when we were moving around a lot, I always ended up in the tiniest room in the house on my own while they shared the other big one, and I got very, very good at storing my geek shit. I still am, and can slot away every Warren Ellis, Garth Ennis and Alan Moore comic I own under the bed.

I like the puzzle of putting things in the right place. The nearest digital equivalent to all this is cutting and pasting files into new folders, and I don’t stumble across a fascinating 100-page interview with John Byrne in his prime in an issue of David Alan Kraft’s Comic Interview by right-clicking on stuff.

My parents always rented houses when we were growing up, so we were always moving, and by the time I was 30, I had lived in 33 different houses. (I can’t even name all the streets anymore.) We moved into this last flat more than four and a half years ago, which was, by far, the longest I had ever lived in one place in my entire life.

Maybe that’s why I ached so much more after this shift. I was out of practise, and, well, I’m thirty-seven, not eighteen. There are more aches and annoyances than ever before.

We were also firmly entrenched in that last place, and there were things in there that I hadn’t seen in years, and it was always nice to stumble across some comics that I had bought, and completely forgotten about.

A good collection of comics is never stagnant, and over the past five years I have got rid of more than I have got new, but there was still a shitload to move. But now it’s all done, and in the new place, I get more display options. I spend a lot of time figuring out if the Iron Fist comics are good enough to warrant a living room place - (They do. For now.) – and whether that Knight and Squire book belongs on the bookshelf in the spare bedroom. (Sorry, Knight and Squire, but you were just a little too arch.)

It’s a total pain in the arse sorting all this out, and moving house can be a huge inconvenience.  But it’s totally worth it.
Posted by Bob Temuka at 6:12 PM

Hi Bob! Just got done reading up on your blog and had a quick question. I was hoping that you could email me back when you get the chance. Thanks!