How many sides does a piece of spaghetti have?

I got another phone call accusing of being part of a co-ordinated attack to take down the mayor of NZ's  biggest city the other day, and I finally snapped and told the caller it was all true and then he said 'A-ha!' and hung up on me. I probably shouldn't have perpetuated the bullshit, but I think I really made that caller's day.

The conspiracy and me
Originally posted December 18, 2012

I love a decently weird conspiracy theory as much as everybody else, and at one time I really did almost believe there was one giant vast conspiracy, involving grey aliens and men in black, that was responsible for everything that was bad in the world.

But ever since I started being accused of being part of that conspiracy on a daily basis, I find it a little harder to believe.

Of course, I would say that, wouldn’t I? 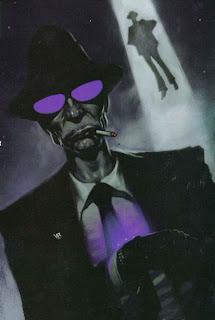 Conspiracy theories are obviously attractive – imposing a narrative on random events can help make sense of those events, especially when they have tragic consequences. Terrible things can’t just happen because somebody fucked up, or wasn’t paying attention, or was having a wank when they shouldn’t have been, there must be a reason behind it. There has to be meaning.

And they certainly have some elements of truth (and it’s entirely possible that the most unlikely theories are actually totally true, because the world is just that weird sometimes). Nobody believes it was just one gunman on the grassy knoll, but that doesn’t necessarily mean that JFK was killed in a vast conspiracy involving the CIA, the Mafia and Nazis.

In the mind of the hardcore theorist, 9/11 is a symbol of unrestrained government power, Roswell represents the most terrible of secrets and Marilyn Monroe’s death showed that even the world’s most famous woman wasn’t safe from hideous and powerful forces.

They’re all good stories, even if the truth is almost always a lot messier, and far less interesting.

Strange events invariably occur around a world-changing moment, and can appear as proof of some terrible conspiracy. Unfortunately, explanations can often end up being a bit stranger – and more mundane – than expected.

Errol Morris summed this all up nicely in a short film he did about the Umbrella Man and his connection to the John F Kennedy assassination. After decades of assumptions and conjecture, it turned out the man who raised an umbrella on a sunny Dallas day in November wasn’t concealing a gun, or signalling for somebody to open fire. He was just making an obscure point about the dangers of political appeasement. Nobody could have predicted that, and it’s so dully unlikely, nobody would ever make it up, giving it the ring of truth in the white noise of speculation.

Even the smartest of us can see patterns where none exist. Noam Chomsky is a fabulous thinker – on both language and the merits of human compassion – but there is still a moment in the Manufacturing Consent film documentary, where he talks about a systematic suppression of certain information by major media outlets, and comes to the logical conclusion that there is some kind of collusion going on, because that’s the only way to explain the numbers he comes up with.

The only person to argue against his point in the film is a senior journalist who points out that omission or misreporting was almost always down to some kind of fuck-up, rather than some grand plan. He says you can’t get five people working in any newsroom anywhere in the world to unequivocally agree on anything, let alone systematically defraud everybody about everything.

But Chomsky was right and could prove it with evidence, because he was coming from an academic background, where it is perfectly acceptable for a Phd student to spend days or weeks or months tracking down the right reference, digging up the right data, and cross-checking it over and over again. And he was applying that kind of thinking to an environment where nobody wants to get their facts wrong and barely consider any political agenda, but damn it, the subs need page three right fuckin’ now, and people working under that kind of time pressure do make mistakes, and omissions, and the facts might come out unbalanced, one way or the other, because no system is in perfect equilibrium.

Of course, I work in a daily newspaper newsroom, so I’m obviously part of the problem. But if I was guilty of all the bias I’m accused of on a daily basis by our beloved readers, I only got one question: Where’s my fucking cheque? 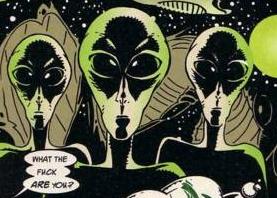 I have some friends who still go on and on about things like remote viewing and hidden aliens when we’ve all had a few beers, and it’s not as easy to smile and nod politely as it once was.

The fevered righteousness of many theorists can be deeply off-putting. Room 237 – the documentary about the theories surrounding Kubrick’s The Shining - almost lost me when one of the contributors starts talking about how he is being followed by the Government because he’s proven that The Shining is Kubrick’s attempt to reveal he faked the moon landing footage, and they’re scared of him exposing the truth, and it’s s bit of a sour taste in a relatively sweet doco.

I put up with it, because I’m sure there were times when I shared the same ideas, even if they just seem more and more implausible and silly every year. I also put up with them because they’re often terrific fictional stories.

As long as you don’t actually believe they’re true, conspiracy theories can be vastly entertaining. The X-Files was way too serious for me, but tapped into pre-millennium paranoia with a deft hand. I loved the ‘What if all the theories were all true’ attitude of The Invisibles, (and I admit I’m watching that clock nervously). And I think the Big Book of Conspiracies is the single best thing in DC’s fucking excellent Big Book series.

After all, it’s aliens and other vast, eldritch forces imposing their wills on a blind humanity. They’re stories of brave individuals who exposed the truth, often with tragic (and poetic) consequences, and they show that the universe isn't a meaningless series of events. 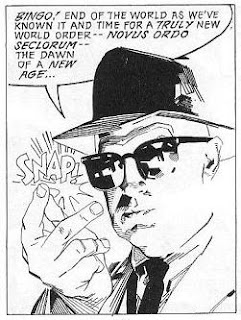 Yesterday somebody rang up the newsroom to tell me I obviously had a pro-Government agenda because one of the 200 headlines we had on the site that day said ‘rail loop’ instead of ‘rail link’, and the day before I got an email telling me that the climate change story I’d put up on the website was obvious proof of a socialist agenda, and I can’t tell what side I’m supposed to be on in the situation on the Gaza strip this week.

So I obviously can't be trusted.

But that doesn't mean I can't enjoy a good spooky story or two.
Posted by Bob Temuka at 6:36 PM