The local library isn’t all about big,disappointing event comics. It’s also about keeping up with all sorts of decent comics that I never quite got around to buying for myself. And sometimes, just sometimes, it’s about finding something brilliant that you didn’t even know existed.

Like Creepy Presents: Richard Corben, a 350-page collection of the great artist’s work for the Warren horror comics of the seventies, featuring his collaborations with writers such as Doug Moench and Jan Strnad, with much of the work reproduced directly from the original art boards.

I had no idea this had even been published, but after immersing myself in Corben’s world of airbrushed exaggeration for the past couple of days, I’m going to have to get this book for myself, because it’s just that magnificent. 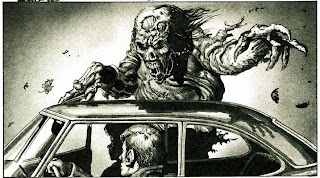 I never liked the Warren horror comics as a kid. They were always a bit dirtier and clumsier than the horror comics DC put out, which were full of slicker chillers. Magazines like Creepy and Eerie were just a bit too grown-up, and the sickly colours and sicklier grey wash tones genuinely made me feel nauseous as a child.

(Interestingly, there was a lot of access to Warren comics if I did want to read them when I was growing up. This is the early eighties, and things like Eerie or Vampirella were very popular with some of my aunts and uncles, and they always had small piles of the mags lying around. They were the sort of working-class people who would never read any other sort of comic, except for the odd Footrot Flats book, but they couldn’t get enough of these mature nightmares.)

Fortunately, I’m not a kid anymore, and as pointed out recently, I’ve come to appreciate art which pushes hard into the realm of the grotesque a whole lot more. And if I was impressed by the ability of Kevin O’Neill to still gross me out with comics he produced 20 years ago, it’s even more impressive to see how Richard Corben’s artwork is still powerfully disturbing, 40 years after it was produced.

Corben has been producing his incredibly indiosyncratic comic art since the late sixties, and is still putting out some stunning work. Over the past decade, his art has popped up in several projects for the big comic companies, bringing his savage eye to characters such as John Constantine, the Hulk, Luke Cage, the Punisher and Conan. Some of his most impressive comics in recent years have been in the Haunt of Horror comics for Marvel, adapting HP Lovecraft and Edgar Allen Poe stories, and bringing decades of experience with craft and humour to these old tales.

He’s almost respectable these days, but don’t let that fool you – Corben’s comics, even ones that were created 40 years ago, are still gloriously gross, and reading the huge chunk of them collected in this new Dark Horse book is a queasy experience, but one that is still incredibly rewarding.

Sometimes, like in Jan Strnad’s remarkable Bowser story, his art is genuinely disgusting, in a way few other comic artists could ever match. Nobody does a blobby nightmare like Corben does a blobby nightmare, and Bowser’s story of a hungry creature composed of nothing but writhing tentacles, is all the more grotesque with its background of suburban blandness. 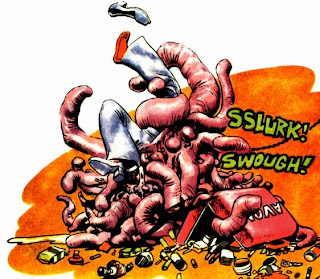 His monsters – as seen often in the new Creepy collection – are truly horrible, but everything is horrible, and his ugly humans are often worse. When people are killed or wounded, the violence is usually incredibly visceral, and puncture wounds are delivered in delicious detail – the reader can feel the impact of a blow, or the sick slice of a blade, or the tearing mess of a bullet.

And yet, even though I still see the things on these pages that so repulsed me as a kid, I now can’t get enough of it. Even with all the grossness, Corben’s style is addictive, humourous and incredibly entertaining. His art straddles a broad line between ultra-realism – there are moments when the gray wash tones make his faces look almost like photgraphs – and unashamed cartooning – there is all sorts of exaggeration going on.

These two styles shouldn’t work together as one consistent view, but they do. And this meshing of realism and cartooning is just one of many tools  the artists employs, with art that feels so natural, and looks almost effortless. 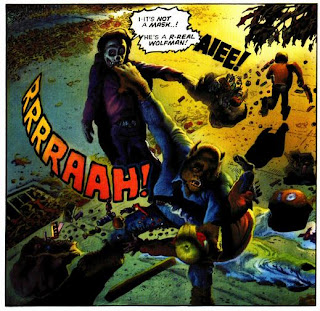 After some youthful underground work, Corben’s first major assignments were for Warren, and the variety of stories on display in the new collection give him plenty to work with. The tales are usually overwritten and stuffed with purple prose, but it’s easy enough to skip over the extraneous words, when there are so many beautiful pictures, and such a variety.

This collection of his Warren work, all in one place and so dense, firmly establishes Rich Corben as an illustrator of many talents - his use of colour still feels revolutionary and he bends the storytelling around the bizarre concepts the stories demand. He gets to draw ugly witches and unnamable menaces and space creatures and his art is soft or hard or squishy, as appropriate for each tale

There is a base Corben style, with flaky edges of his line giving his faces craggy depths, while the clothes and backgrounds share heavy wrinkles. There is also a consistent relaxation to the rules of anatomy, with massive heads and big hands, giant jutting jaws and bulging eyes.

This base style is often used to great effect, but he also softens the line, using colour to give depth and shading, or presenting it all in dark monochrome. Dipping in and out of this new collection is endlessly rewarding, with each and every page offering something remarkable. 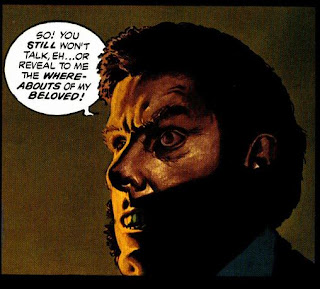 Finding this book in the library was extremely fortunate, because it’s certainly inspired me to get my own copy, to find more hidden depths in Corben’s ugly beauty

I honestly can’t recommend Creepy Presents: Richard Corben highly enough, even if I know it’s not for everyone. The kind of thing that repulsed me as a kid and enchants me as an adult have a power that can just as easily turn off the casual reader completely.

But it’s an essential read for anyone who wants to dive deep inside the world of a modern comic master, and isn’t afraid of getting something gross (and unexpected) on their shoes. 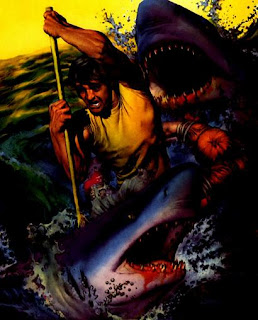 Addendum: While we're on the subject of gloriously grotesque seventies comics, it was a terrible shame to hear that Spain Rodriguez has passed away this week. His comics still freak me out a bit, even as an adult, even with the passionate energy he brought to his work. I look forward to further interaction with his work in the future, when I've grown up a bit more. I would say RIP, but concepts like "rest" and "peace" aren't ones I have ever associated with Spain...