A life of Kubert

The first comic I ever read all the way through, from start to finish, and understood all the words, was an issue of the Unknown Soldier. I was about five. This is 1980.

I loved those DC war comics. They were simple morality tales, drenched in hard-hitting action, with powerful lessons about man’s inhumanity to man. I’m an ultra-pacifist for life, and a lot of that starts with the tales of Sgt Rock and Easy Company, and the Unknown Soldier, and Gravedigger. Once you strip away all the thrills, the comics couldn't be any clearer: ‘Make war no more’.

And they had these gorgeous covers – always well-put together and exciting, capturing a moment of crazy action at its height. Moments of tension and the blistering aftermath of a terrible battle. A snapshot of peril or sheer human terror.

I was still only five, so it took me a few years to realise that one artist did better covers than anybody else, and even though he had legions of imitators, his art was always noticeably stronger. More vividness, more power, more impact.

Joe Kubert was just better than everybody else. 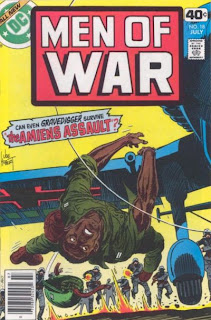 In August 2012, the wife and I are travelling up to the top of Scotland, and we stop in Inverness for the night, and it’s a beautiful city - a lot more green than I expected, even if the buildings are stifling hot in the summer, because they have to survive the worst winters. It’s a charming city, steeped in history and story, and Loch Ness is right there, and I’d recommend you stop there yourself, if you’re ever in the region.

I hate it, because it’ll always be the place I was when I got on the internet and found out that Joe Kubert had passed away. 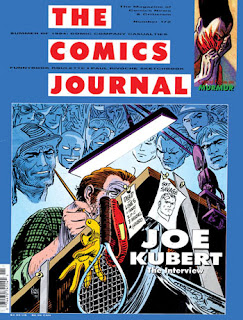 I’m on a train between Timaru and Dunedin, heading south, somewhere in 1995, and lost deep in an interview with Joe Kubert that just seemed to go on and on and on, and it’s the single best comic book creator interview I’ve ever read in my entire life.

It was always hard to find issues of the Comics Journal in my part of the world in the mid-nineties, so when I found a bunch of them for $2 each at a weird magazine store’s closing down sale, I skipped several lunches (no job at this time), so I could afford a dozen of them.

They were great issues too. They were ones that had those wonderfully long interviews with the likes of Grant Morrison (just starting out on the Invisibles), Frank Frazetta (who was too much of a man’s man to bother with anything as mundane as the actual truth) and Los Bros Hernandez (in an excellent interview conducted by Mr Neil Gaiman).

These were some of the first really big comic interviews I’d ever read and I was in comic heaven, but I still didn’t expect the one with Joe Kubert to be so fucking amazing.

All I really knew at this stage was that I’d really liked his covers as a kid. He was still a favourite artist, but probably not even in the top ten, and the Comics Journal #172 – the one with the Kubert interview - was one of the last of those cheap issues I got to.
The scenery on that train ride between Timaru and Dunedin is occasionally spectacular, but I barely looked up from my magazine for the whole three-and-a-half hour trip, because I was lost in a world of Kubert.

The interview – conducted by Gary Groth – went on for dozens and dozens of pages, and Kubert’s answers were as sharp as his artwork. There was no major hubris on his part, but he also wasn’t ashamed of his own accomplishments, and he told stories of the oldest days with a clear memory.

Unlike so many other long interviews with comic creators, legendary or otherwise, there was no arrogance, and no bitter desire to settle some scores, and no endless shilling of his latest project. There were just easy recollections and open comment, and by the time the train arrived in Dunedin, I’d read that interview twice. 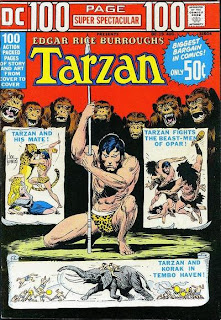 Sometime after the turn of the century, somewhere in the year of the Space Odyssey, and I’m on a serious Bronze Age kick, and I’m hoovering up any Kubert comics I can get.

I also get the chance to finally read his Golden Age work, and there is a newfound appreciation for that as well. Art that once seemed simplistic now looks pure, and Kubert’s clumsy beginnings soon straighten out, as his artwork opens up and soars as high as Hawkman.

By the sixties and seventies, Kubert’s art is undoubtedly unique and always good. While he still does a mean superhero comic, (he remains the only artist who could ever make Ragman look cool), it’s his work on things like the war comics and barbarian books and the odd horror book that really shine. He also makes some of the only Tarzan comics that are ever worth reading.

Kubert's broken line is used to convey movement and power, and his tight lines with an illusion of looseness, show him picking apart the whole damn medium and putting it back together, and generating an infinite amount of influences.

He was unparalleled as a storytelling draughtsman – his work was always clear and exciting, and there is that purity again in the action scenes, or in the dreadful moments surrounding violence (nobody, but nobody, did better sweaty anticipation).

And his covers were even better, and all over the place, on all sorts of books. The only bad thing I can ever say about Kubert’s covers were that they were the first place I sadly realised that the cover artist wasn’t always the same as an interior artist. 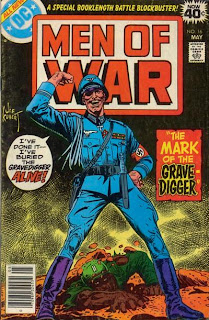 Deep in to the 21st century, and Kubert was still nailing it, right to the very end. It seemed every now and then that he had taken some well-earned retirement, but then a new Tor comic or Jew Gangster book would show up, and show everybody how it was done.

In his last few books, Kubert had finally stripped away the last remnants of artifice – many of his final comics have been printed as simple, raw pencils, giving books like Dong Xoai, Vietnam 1965 more humanity.

Joe Kubert passed away a couple of months ago, but his artistic legacy is still alive and vibrant, and his tricks are still trotted out every Wednesday on comic book shelves.

One of his stories showed up in the very good Ghosts comic that Vertigo did a few weeks back, and there are still a few more posthumous comics to come out, and I’m getting them all, because his work is as passionate as ever, and we should savour it while it lasts.
Posted by Bob Temuka at 11:11 PM