Late to the party with Jim Steranko’s Nick Fury

Even though I always like to pretend I know what’s going on, there are all sorts of holes in my head when it comes to comic knowledge. I’m still shamefully unaware of 90% of the things going on in Europe, and 99% of Manga remains completely unknown to me.

The world of comics is so wide and broad, it can take some time to get to things. Even comics that are undisputed classics, that could change my view of the world in magical ways, have to wait. Cost and availability are helpful limitations, but there is still so much good stuff to get too, and so much good stuff I never got around to. Stuff that came out last week, and stuff that came out decades ago.

This week I filled a hole in my head. I filled it with STERANKO. 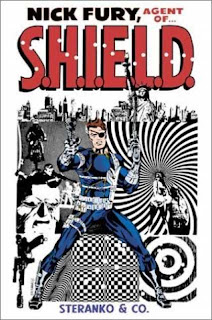 But I hadn’t actually read many of his comics, mainly because there weren’t all that many to read. Apart from the significant work he did on Nick Fury in the sixties, there were only a handful of Steranko comics – the odd 10-page Superman comic, some striking covers and bursts of brief activity on Captain America and the X-Men (which still uses his logo ideas today).

So even though I was perfectly capable of bluffing my way through a conversation about Steranko’s work, thanks largely to the copious amount of commentary produced about it over the past four decades, I had little knowledge of the actual comics. 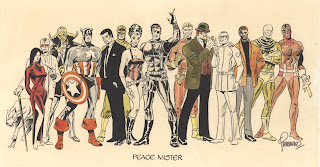 I’ve sorted out that terrible oversight now, after buying a collection of Steranko’s Nick Fury comics that Marvel put out a decade ago from a local comic mart, a month or so back.

It’s a dense book, with the usual Marvel over-plotting of the sixties, each compressed issue bursting with ideas and action. But it’s also still slick and exciting, in a way few modern comics can match.

Reading these comics for the first time, it’s surprising how familiar a lot of it is. Steranko’s panels have been used as examples of form in books and magazines for years, showing the design possibilities of the comic page in dozens of essays and articles. There are familiar action panels that have Fury desperately reaching out towards the reader, and singular shots of bizarre machinery, crackling with unearthly energy.

I expected all the stylish psychedelia and bizarre photo-montages, but the thing I hadn’t seen before was the energy that sparks off the printed page, as characters hurl themselves against the edge of the comic panel, and sometimes break through. (Steranko is obviously told to ‘do a Kirby’ in his earlier issues, but soon ditches the obvious influences, while keeping true to the King’s lessons about momentum and power.)

All this movement and excitement is something that has been missing in a lot of Fury comics over the subsequent decades. Nick Fury is literally bouncing off the walls in Steranko’s comics, and after years of a Fury who does little more than stand in control rooms, smoking cigars and barking orders at minions with cute butts, it’s a cheerful reminder that there is a lot more to the character. That you can throw him around, and put him up against Captain America.

By the later Fury stories, Steranko is balls-deep in pure psychedelia, pages spinning around optical illusions and desperate fisticuffs. But psychedelic storytelling isn’t just about the pretty visuals and Pop Art, it’s also funny and silly, and pleasingly lethargic at times. And it also dips deep into drug-induced paranoia and worryingly deep thinking.

It’s the way things in Steranko’s Fury comics are always a bit uncertain, and a bit confusing. Fury barrels through his adventures like an unstoppable bull of a man – but is often lost, or misdirected. Eventually, like all the great psychedelic comics, it’s revealed that the heroes and villains are all just pawns in some unknowable game played by omniscient beings, (and like all the great Marvel comics, one of those omniscient beings happens to be Doctor Doom).

Steranko’s Fury gets close to some kind of cosmic enlightenment as he’s saving the world from megalomaniacal idiots, and sees some pretty sights on the way, but he is sometimes too small to be seen, exhausted and lost in the immensity of Steranko’s world. 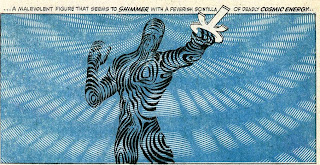 But it’s okay. The drugs do wear off, and Fury does get to punch pure evil in the face and usually saves the day.

Steranko’s Fury stares into the abyss, and then drops a hand grenade into it.

To a 21st-century eye, these comics can appear to be pretty clumsy and wordy, or unfashionably weird. But they are still fine comics.

With these comics, Steranko set the template for the Marvel writer/artist, showing you could do artistically daring comics that adhered to a singular vision in the corporate comics world. Artists like Miller, Simonson and Byrne followed his lead, even if it took them decades to step in his footsteps.
Even the King got to finally write and draw his own comics for Marvel for one brief, shining moment in the late seventies, 10 years after one of his many protégés showed the way.

Steranko was part of a generation of artists that changed the way modern comics looked at the tail end of the 1960s, joining craftsmen like Neal Adams and Jim Aparo in producing slicker, leaner and moodier superhero comics. And then he was gone, off in the world of movie production and fine art, leaving behind too few comics

But while those comics are few in number, they are gigantic in influence, and are still hugely entertaining, viscerally thrilling and undeniably stylish. It might have taken me forty years to get with the groove, but better late than never.
Posted by Bob Temuka at 10:52 PM

What Steranko could accomplish in 20 pages would take todays creatives six issues and it still wouldn't be one third as entertaining.

He could take one tier of a three tiered page to depict an action that now takes three pages (Kirby could do it in one panel).

You can only get part of Steranko by reading that particular volume. First of all, someone re-coloured it. Steranko coloured his own books and this re-colouring job messed up many of Steranko’s concepts. Second, you really have to read the comic books to appreciate his storytelling. The reprints never read right because they are missing the advertising pages present in the comic books of that era. These ad pages would appear on the same pages every month in every Marvel comic. Steranko would devise his storytelling around where the ad pages would appear. Major shocks would come after the ad pages. Pages were designed based on where the ad pages would appear. If an ad page was beside a Steranko page, the page would be designed as a single page, if two Steranko pages were side by side, they were designed to be seen like that. The reprints ignore all of this!

I would love to have seen these comics in their original form, Tony, but I've never, ever seen copies of the comics that weren't outrageously expensive, which is why it took me so long to getting around to them.

On the other hand, the fact that Steranko's comics are still so energetic and powerful, even with all the stinky brown colouring in the reprint, speaks volumes about the worth of the work.

Reading copies on eBay seem plentiful enough and seem very affordable. But if you are going to get the comic books, skip Stranges Tales, and get Nick Fury, issues 1,2,3,5 and Captain America, 110,111,113. These were the high points of Steranko's work for Marvel comics.