It’s goofy and silly and the characters never really grow and the special effects were always a bit rubbish, and the science in the fiction was always a bit dodgy and it’s got the single daftest end-credits music in the entire history of television. 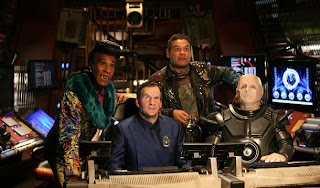 I always liked Red Dwarf, right from the start, but I was genuinely surprised by how much I enjoyed the latest season - Red Dwarf X

After a couple of series that mixed up the formula and just got too clever for their own good, the tenth series of Red Dwarf was a consciously back-to-basics exercise – just the same four blokes bombing around the same infinite galaxy in the same giant rusting spaceship, three million years from home. The last human, his massively annoying (and dead) best friend, a robot and a cat, all truly lost in space.

At its best, Red Dwarf can be both surprisingly subtle and totally broad – it’s practically enshrined in the show’s format. And that makes it perfect late-night TV comfort food. After all, I’ve been watching Red Dwarf in late night telly since the late eighties. I don’t think I’ve ever watched an episode before eleven at night. It would feel wrong

It was always a late night treat in this part of the world, ever since the first series was on Friday nights in the late eighties, chopped up as part of an end-of-the-week music show. And it still feels right to watch it at the end of a long day. All the weird bollocks sci-fi and morose introspection in the immensity of the universe just feels right when everybody else has gone to sleep and the world is quiet, and you’re all alone, and it’s cold outside. 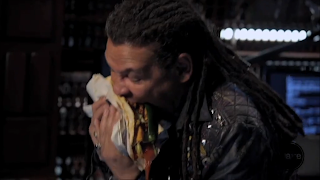 So here we are, more than 20 years after the first series, and characters have barely grown or developed, and the basic situation hasn’t changed at all.

All of the stories in the tenth series could have happened in the first years of the programme. The effects are a lot better, and the art of television production design has come a long, long way, but the stories stay the same.

There is almost a checklist that needs to be filled out for Red Dwarf X – there’s the part where a crew member finds out something shocking about his family history, there’s the whole episode spent wandering around the ship processing news from home that has arrived on a mail shuttle, and there’s the bit where dodgy pseudo-science allows the crew to interact with a famous historical figure (they finally got around to Jesus this series).

It’s easy to sneer at this blatant attempt to recapture the past, but after the frankly awful Back To Earth series and various other attempts to shake up the crew, the back-to-basics approach – after 24 years! - from co-creator Doug Naylor really does work. 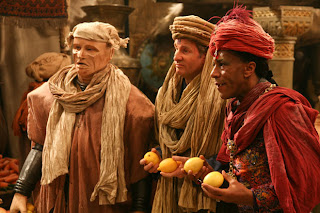 The main effect of this strike at the heart of the series is a renewed focus on the characters. It’s the same actors, still living in these roles, and the dynamics have changed and grown over the decades, but their relationships are eternal.

The programme does often feel like a real boy’s club, but it only really works as a total sausage fest, because a female – any female – gives Lister hope that the human race can go on, when there shouldn’t really be any hope. There’s no real defense of the fact that the only two female characters who show up in season ten of Red Dwarf are a traitorous starship officer and someone so dim she takes a walk out of an airlock, but attempts to bring females into this blokey-bloke world upset the balance.

It’s why Kochanski can to go, even though Chloe Annett was a welcome dose of beauty and new humour in the show, and why one of the many failings of the aborted US version was making Cat a female.

It’s a long story about two main blokes who are at the bottom of society, even when society is all gone. The relationship between Rimmer and Lister is endearingly complex, they are mean and snide to each other on a daily basis, but do actually care for each other. Even if they’ll never say it.

Kryten is still a three-joke wonder, usually over some kind of housecleaning attachment, but invaluable for plot movements, even if this has rendered Holly redundant. (I still miss you, Holly.) And The Cat is still the series’ ace in the hole – totally narcissistic, able to speak easy truths that others don’t even notice, and easily distracted by pieces of strong. 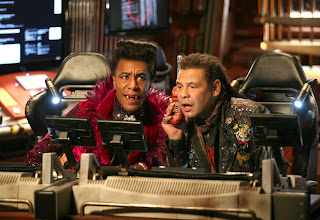 I got seriously hooked on Red Dwarf somewhere around its peak in the third and fourth seasons (it’s no surprise to me that Red Dwarf was most popular during the years there was no new Doctor Who). I remember one late night in the early nineties, that was just a little too late, and I fell asleep and slept right through a season three episode, and I was so fucking man with myself for falling asleep, because I had no idea when I’d get to see it again. (Remember when you missed something and that was it? Tough titty if you wanted to see it again? The past sucked, man.)

I even got the Smegazine, with its largely dull articles and some decent comics. And I can’t help feeling affectionate towards the magazine in particular, because I had a girlfriend who worked in the bookstore that sold it, and we first got talking about it, and started going out, and lasted about two weeks, because Red Dwarf was all we had in common. (But it was a great two weeks.) 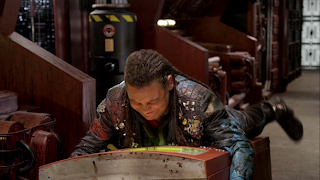 So yeah, I don’t care if Red Dwarf is just comforting and silly, because it’s a harsh world out there sometimes, and a bit of comfort isn’t too much to ask. Red Dwarf is still goofy and doesn’t really develop the characters, but the special effects this time were excellent.

And I still sing along to that end credits theme tune, every time the show ends. It’s a cheerful way to sign off on the day, especially when I’m all alone. More or less.
Posted by Bob Temuka at 12:06 AM

been a Red Dwarf fan for many years; love your comments and yes, I don't know why the theme tune was never a massive number one hit! Great lyrics.Fab series. may Red Dwarf live forever!