(#2 in a two-issue limited series)

Nikolai Dante ended – for the most part – like it was supposed to, with the Russian Rogue finally vanquishing all of his worst enemies. There were terrible sacrifices (it’s still the only comic to make me cry over a piece of dead computer hardware) but there were also moments of heroism and compassion that ultimately saved the day.

This was always to be expected, since a 15-year action-filled saga was unlikely to end in despair and misery. But what then? After freeing the world from tyranny, would Dante go out in his prophesised blaze of glory, or would he rule an empire in a new and just age?

Well, neither, as it turned out. Instead the story ends with two men playing Russian Roulette, with the winner wandering out into the world, wondering what he’s going to do next. 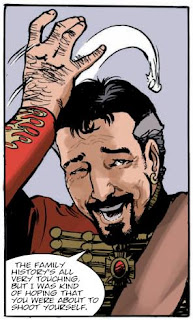 With its sexy and swaggering take on the typical 2000ad killing machine, Nikolai Dante was the one strip that got me reading the comic again after a decade-long break (with Dredd also contributing a lot to that homecoming.) I fell for it hard.

Created by Robbie Morrison and Simon Fraser, with able assistance from the great John Burns, Nikolai Dante has undoubtedly been one of my favourite comics in the past decade. It was funnier and openly sillier than the usual things you saw in 2000ad, but it could also crank up the emotional intensity, while still finding room for the misadventures of a rogue on a flying robot horse.

There were massive shifts in tone that still felt organic, with the light tales of a gentleman thief and his sci-fi shenanigans slowly shifting into a deeply dark war story, before becoming something else that was a weird combination of both, before leading to the expected grand finale in the past couple of years.

But when that grand finale was done, and there was only epilogue, the final fate of the comic strip’s title character was still unknown. And while there was certainly a lot of closure in those final pages, I just didn’t think Sympathy For The Devil, that last story, would turn out the way it did. And like Dredd, my first reaction was one of disappointment.

Again, like the disappointment I felt when I got to the end of Day of Chaos in Judge Dredd, this was almost all my own fault. After all the Dante comics of the past decade, I was genuinely hoping for some kind of Happily Ever After, but also ready for something a lot more tragic.

To get something that doesn’t really fit into either category – to get an ending that was so open-ended, after all that – was a more than a bit disconcerting.

And yet… What other ending could there have been for this comic? 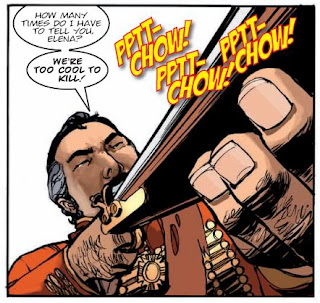 After all, the appeal of Dante was always that he didn’t quite do what was expected of him. He shamelessly stabbed his most vicious foes in the back instead of taking them head on, and literally ran away from offers of ultimate power.

So when it was all done, and he’d raised his army of thieves & whores and brought down a terrible tyranny, Dante was never going to be happy with the reins of ultimate power, and was just as unlikely to throw his life away.

The need to burn out, rather than fade away, is a fairly adolescent one, and after all he had been through - all the war and death and family melodramas - Dante was too old for that shit.

(Besides, Morrison takes piss out of the idea that Dante is going to bleed to death heroically pretty early on in Sympathy For The Devil, with another Great Swordsman suddenly appearing, only to be despatched almost instantly, just like all the other Dead Great Swordsmen who crossed blades with Nikolai.)

And he can’t be the Tsar, because he was just so unsuitable for that type of role, and the last conversation he has with the previous ruler convinces him that he couldn’t handle that burden, and he does not have the required cruelty to keep the peace.

He’s brought down an empire, but he is not the man to rule it. He is the Tsar of All The Russias for just the briefest of moments, before he walks away.

There is no final fate for Nikolai Dante. He just walks away from his own story. 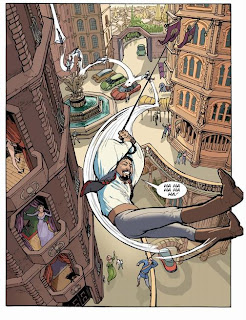 Even with an intense bout of Russian Roulette, in which Dante actually chooses to put the gun to his head, it certainly wasn’t what I was expected from the final Dante story, and there was some disappointment when I did get through the last five episodes in one go. This ending certainly wasn’t as pessimistic as the climax to the latest Dredd mega-series in the pages of the same issues, but I was – like Dredd – left wondering: ‘Is that it?’

But then I went back and read the past six months of Dante stories, and it did feel like a more natural ending. It was more obvious that there wasn’t be anything close to a fairy tale ending.

This last story is drenched in the main character’s own uncertainty over his own ability to rule - the only time he laughs is when he dives out a window to escape a wall of bureaucracy, and swings across the city on some handy flagpoles. Even the love of his life – the fabulous Jena Markov, can feel it, and isn’t surprised when he doesn’t show for the wedding

I’m damned if I know what sort of ending I was expecting, but the more I think about it, and the more I consider it, this feels more and more like the only ending it could have ever had.

The first reaction to a comic story can be a vital one – instantly crystallising an opinion that won’t ever be shaken. But there are plenty of other comics that can be initially impressive, only to appear more problematic as time and thought go by.

And there can be comics that initially appear lackluster, or weak, or disappointing, only to later reveal themselves to be anything but, and that’s been my experience with these Dredd and Dante endings.

Any initial disappointment I felt while overdosing on thrillpower in a London café has been almost completely replaced for a sneaky admiration for both endings.

After all, they didn’t give me what I expected, and that’s a good thing – sometimes the best thing a story can do. To complain too much about that just feels childish.

ill probably never see your response to this comment or know if you even got it, but i think you totally nailed a nice summary of the ending, literally just finished it 30mins ago, a part of me was sadisticaly dissapointed he didnt blow his brains out in the russian roulette, another part of me thoroughly expected a butch cassidy style ending, but really i always wanted the happilly ever after! i got none of them, not what i expected and not want the devil or angel on my shoulders wanted, it leaves it open, endings be damned! i frickin love dante, just wish i owned a few more comics so i could cut up and stick the pages in a frame XD

Endings be damned, indeed! I'd be interested in hearing what you think after you've had a few days/weeks/months to digest that ending, because I am certainly - if slowly - feeling more impressed by it...