My Friend Dahmer (More something for everybody)

My Friend Dahmer looks at the growth of a killer from a side-on view. It makes a brief stab at getting inside the head of Jeffrey Dahmer, and while it is also funnier and more sharply observational than could be expected, it also manages to be just as disturbing and queasy as the subject matter suggests.

And my wife freaking loved it. 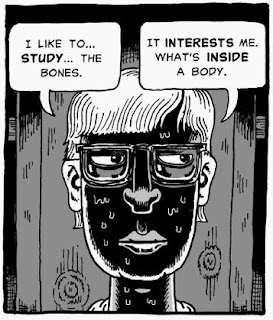 I’ve learned – to my cost - not to push comics too hard on people who never read the things. It’s too easy to be too eager, and that pained and barely-hidden enthusiasm can turn people off the medium for good.

If they come to me, asking for stuff, then I’m always willing, and if I can help them stumble across something they might really like, it feels like it’s my duty to help out. But even though I often spend Saturday afternoons at home ranting about how much I enjoyed the new issue of The Boys, or Peter Bagge’s latest bit of brilliance (seriously loving Reset), or how much I’m digging the Gibbons on The Secret Service, I never go any further and really push these things on my lovely wife

She puts up with a lot of comic-related shenanigans. She has spent more time waiting patiently in comic shops than anybody really should – her favourite ones are the ones that have a “wife couch” - she has almost forgiven me for dragging her halfway across San Francisco just so I could get an issue of Onomatopoeia from Comix Experience, and puts up with storage issues that would drive a lesser woman mad. 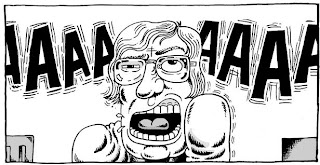 That’s fair enough – she loves horses and I can stand the big-teethed abominations – and there is nothing wrong with a couple having completely different interests (as long as the important things still harmonise).

She always tells me that when it comes to reading fiction, she would rather form the pictures to a story in her own head while she is reading, rather than be nailed down to one single artist’s vision, which is kinda hard to argue against. (Trust me. I tried. And yes, I did point out the film and TV hypocrisy) And the need for literary trash in her life is more than fulfilled by romance novels.

She has read Watchmen, V For Vendetta and From Hell, mainly because of the movies, but isn’t interested in Miracleman or Swamp Thing. And no matter how many times I tell her Love and Rockets is a heartbreaking journey into the soul, built on a punk-rock ethos that keeps it real, even as it reaches for the sublime; that’s as far as it goes.

Fortunately, she also has a slightly morbid streak, that means she doesn’t consider a museum to be a proper museum unless it’s got mummies or bog people or some other kind of dead body, and she soaks up any kind of True Crime story. (Though I never should have let her watch that documentary about the BTK killer. I still have to check the wardrobe sometimes.)

So as soon as I read My Friend Dahmer, I knew it could be something she was interested in. I just had to be subtle about it. 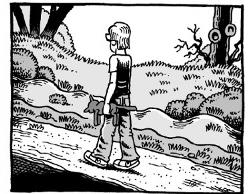 It had a good chance of catching her eye, because My Friend Dahmer is a pretty morbid book based on a grimly fascinating real event. Fortunately, it’s not just relying on the voyeur side of things – Backderf’s story is not just about Dahmer, it’s about the adults who didn’t notice he was drinking every day at school, it’s about a creepy and banal horror, and it’s about the deeply disturbing undercurrents that flow under any society, even one as dull as seventies suburbia.

It’s that same sense of a rotten core surrounding by a boring and apparently uneventful surface that pops up in films like Halloween and the Virgin Suicides. All those kids on those big empty streets, blindly wandering into the abyss.

Backderf hung out with a future serial killer when he was growing, and took his time telling that story in the years since. Fortunately, while it could have gone down the guilt-trip path (“Oh, why didn’t I do anything”), Backderf just keeps it real, balancing out the horrible inevitability with some deft touches of humour, and some wonderfully goofy art touches.

His last book, Punk Rock and Trailer Parks, was a lot lighter than this effort, but both share a keen eye for detail, and some blunt and deliberately clumsy artwork, that sometimes gets so grotesque, you can only laugh.

(The funniest, and quite-disturbing-if-you-really-think-about-it, part of My Friend Dahmer is saved for the two page epilogue, right at the end, which actually made me laugh out loud, which is a nice place to leave a disturbing book like this.)

In short, Mr Friend Dahmer is a pretty terrific comic book that is both more disturbing than you might expect, while also poking fun at the strange institutions of this time gone by, that allowed this horror to fester. A horror that never really goes away.

I mentioned the comic to the wife when I bought it, and left it lying around on the coffee table in the lounge for a couple of days. I thought it might be something she might dig

And then I came home from work, and she’d already read half the thing. Dinner was late that night, and she had it finished by the next morning. She really liked it, and now she is pushing it on others with an enthusiasm that is both appealing and embarrassing. (My favourite pitch line so far:  “It’s a comic, so it’s easy to read.”) Last night, she gave it to my sister-in-law, who as far as I know, has never, ever cracked open a comic book.

I still honestly believe that when it comes to comics, there really is something for everyone. Comics aren’t just for kids anymore, they’re for everybody. You just have the find the right one, and sometimes it will show up in the place you least expect it, like the fevered mind of a young budding killer.
Posted by Bob Temuka at 10:07 AM

Excellent review. I've been reluctant to press this on friends, disturbing as it is, but I do think it has something of that comic-book-for-people-who-don't-dig-comics vibe. It reminded me of the wildly dissimilar Blankets, in that it is so affecting and sensitively told that it does not require any understanding of the mechanics of comics, but also has a subtlety that rewards closer reading. But it's also such a downer that I can't see it receiving the accolades it deserves, despite the praise form Messrs. Crumb, Ellroy et al. Would you say that the author's earlier works as accomplished?

I've only read Punk Rock and Trailer Parks, but I really enjoyed it, even if the Dahmer book is way more accomplished. It's got that same clumsy vibe, and the dark undercurrents aren't quite so overwhelming.