Game Of Thrones: Another year of obsession

When the second season of Game of Thrones finished a few weeks ago, it ended with a suitably epic cliffhanger, following the first season’s lead with an ending that proves the story the show is telling is bigger, stranger and far deadlier than it might appear.

But by the time the last notes of the last music over the final end credits faded away, I was already feeling a bit lost. When I fell hard for the show last year, I still had all the books to go, and there was plenty of story gaps still to be filled. But in that past year, I’ve devoured all the remaining Westeros stories (with the exception of the most recent Dunk and Egg story), and read innumerable essays on the lives, cultures and histories of this incredible world that George R R Martin has created.

I’m up to speed and, like everybody else, patiently waiting for the next book in the series and the next season of the show.

But I do feel a little lost now, and wonder if the same obsession I’ve had over the past year will survive the next 10 months, without new material to feed the fire.

It probably will, because I fucking adored the second season of the television series. 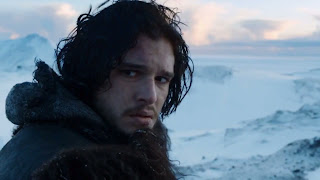 Interlude:
The Bear And The Ho Fair (A mummer’s farce)
By Lady Janye of West Auckland

CERSEI: You sent my daughter off to relative safety on the eve of what's probably going to be a vicious and bloody war when I had clearly planned for us all to commit suicide by Ser Wilko Johnson! Now you will pay the price because I have found - YOUR HO!

TYRION: ohthankgod that's not my ho.

CERSEI: What was that, Stumpy? Planning to have a cry about it?

TYRION: Ahem, yes! Yes, that is my ho! Oh, how could you have found her? How could you be so dastardly and clever and yet still produce psychopathic inbred children? It is a riddle without solving! Oh, woe-ho is me!

HO: Well, we haven't really seen each other in a while….

TYRION: YES I LOVE YOU TOO HONEY! You be brave now, my most favourite of hos!

HO: Sure, whatevs. Just don't forget that I'll be stashed in the dungeon or wherever. After falling for the books so hard, it’s a little surprising that many of the moments I enjoyed so much in the second season weren’t in the novels - that terrific interaction between Twyin Lannister and Aria Stark, Jaime charming and killing his cousin, Bronn and The Hound having words in the pub, Khal Drogo threatening to seriously fuck up anybody who keeps him from his love, even that bastard death.

The television show is full of moments like this, little pieces of character and plot that could not be done in the books because of forced perspectives, or were necessary because TV is a different medium with a need to keep faces on screen, and after becoming so familiar with the books, anything new is instantly apparent, and was usually rewarding in some way.

There were still a lot of great moments from the books that translated beautifully to the new medium – Peter Dinklage selling the hell out of the moment when Tyrion realises that after all his plans and schemes, he still has to lead the attack; or the beautiful way the Brienne and Jaime scenes are exactly what is expected, while still managing to be genuinely funny.

All these little moments – both new and old – sit inside this grand tapestry of a story which just gets so richer the deeper you go, and is superbly paced, with the entire second season moving up towards the big battle in the ninth episode.

But the television show is more than just a retelling of the plot – it has its own style and mood, and does things the books can’t.

After all, the novels don’t have that astonishing score from Ramin Djawadi, who took his own previous themes from the first season and twisted them into strange and horrible new pieces. The King’s Arrival – once a powerful and firm, but fair, piece of pomposity -  becomes something darker and nastier when that dick Joffrey is on the Iron Throne, and the final piece of music in the season took the show’s main theme and slowed it right down to a dirge for the walkingdead, one that was getting faster and faster. And who doesn’t love The National?

The show was also – for all its budgetary limitations - visually impressive – from the green fire on the Blackwater to the endless cold of the North of the Wall (or Iceland). The show also made terrific use of real locations - wars are planned next to pounding surf and tense negotiations take place on cliftops, lterally right on the edge of war.

The land is a major character in this story, but it’s in the faces of the people who live on it that the real story is told. A servant girl with a secret tells an insanely powerful lord that anybody can be killed, the looks of confused concentration when a lone boat is spotted in Blackwater Bay. The series has meaty actors making the most of meaty roles, experienced actors with a lifetime of living finding humour and humanity in amongst the sad soliloquies, and youngsters with incredible depth.

The casting of the younger roles is a real success of this adaptation. The wrong kid actor can kill a whole story, but Maisie Williams holds the laser gaze of Charles Dance, and Alfie Allen shows the tragedy of Theon in those big, shocked eyes. It’s hard to believe these are some of the very first roles these kids have ever had, (and even hard to believe that this Allen is that Alfie.)

The show wasn’t perfect – there were a few missteps and moments that fell flat, but the quality is so high for most of these series, that these tiny faults appear as petty nitpicking, and there are plenty of other places to find that sort of thing, if you’re so inclined. 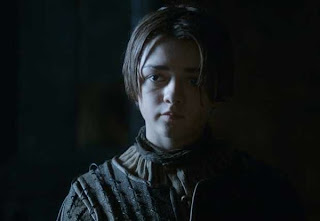 TYRION: He'll land here at the Mud Gate…wait a minute. Why the hell do we *have* a Mud Gate? Did we run out of iron? Steel? Picket fences? Fat children?

Later that day, when the battle begins:

THE HOUND: RAAAA!!! Let's kill people! If any of you die with a dry sword, I'll romance your corpses just like that Tom Petty music video!!!

THE HOUND: Did you hear me? I WILL WINE AND DINE YOUR DEAD ASSES!!!! THERE MAY EVEN BE SLOW DANCING!!! 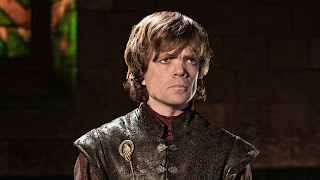 So now that the second season is done, and it’s another ten months – and counting - until the next new episode.

And so what? There’s always more, even in the paths I’ve already trodden. There is the Concordance – which promises to get into all sorts of other stories in this world – and a new Dunk And Egg (and the last one too,) production of the next season is about to kick in, and the Winds of Winter is coming. At some point.

Until the next new thing, there is also the past to trawl through, new depths to explore, new theories regarding the fates of three Freys, or subtle poisonings. I literally lie awake at night wondering if the Dragon With Three Heads has to share the same blood, or how many manifestations of the Bear And The Maiden Fair there are in the story, (I got about nine so far).

There is always more. I may have read all the books and essays and wiki entries I can, but there is always more history, more background to fill in, and that’s how I’ll get through the next 10 months.
Posted by Bob Temuka at 4:59 PM