As an anthology, the quality of 2000ad will always vary wildly, with both genius and crap often found beneath the same cover. But every now and then, the science fiction comic goes through a period of real greatness, where the brilliant stories overwhelmingly outnumber the mediocre. It might not be perfect, and there is still likely to be one duff strip amongst it, but the good significantly outweighs the bad.

So even though I only just wrote about how brilliant I think 2000ad currently is a few weeks ago, we’re back in the pages of the Galaxy’s Greatest Comic again today, because the sheer bloody brilliance of the ongoing adventures of Judge Dredd, Nikolai Dante and Johnny Alpha can not be ignored.

Judge Dredd is in the middle of an incredibly long and complicated story that could have enormous repercussions, Nikolai Dante is reaching its ultimate end, and Strontium Dog proves that Johnny Alpha is, was, and always will be top dog.

I’m still two months behind the UK – I just got #1770 the other day - so it seems a bit stupid to rave about these strips mid-storyline, when the rest of the world has already seen how they turn out, but my enthusiasm for these comics makes my hands shake.

Over the past few weeks, I have been getting genuinely excited about each new issue of 2000ad, eagerly buying each new issue straight off the stands every Thursday at that newsagent opposite the Sky Tower, because these three comics are just superb. Grey Area is still just terrible, and Absalom is only very good, but Dredd, Dante and the Dog are all superb examples of tight, thrilling and emotional action comics.

One of the tremendous benefits if telling one long story about one man over a period of 35 years is that hard decision and decisive actions taken decades ago can continue to have enormous repercussions.

Judge Dredd’s destruction of East-Meg One way back in the Apocalypse War was one of the great ‘Fuck yeah!’ moments in the 1980s, but this is a comic where killing half a billion people actually has consequences that can never really be avoided, even if it takes them decades to manifest.

Dredd’s enemies still hate him and have been trying to strike back at him, launching innumerable attacks over the years. They launch assassination runs, they put him on trial for genocide and they try to poison his whole city, but he keeps pushing them back with his directness and willpower. And the hate keeps going.

‘Day of Chaos’ is the story of their latest effort, and has now been running for months and months, and remains more tense and dense than any other comic I’m reading these days. Each six page slice of the story is packed with enormous amounts of plot, brief slices of extreme violence, great big dollops of daft humour and unexpected moments of real humanity.

There are no certainties in this latest piece of the Judge Dredd story, and it could go anywhere, and past mega-epics have shown that no character is safe, not even old Joe.

There has been some brilliantly dynamic art on Day of Chaos from the likes of Ben Willsher and Henry Flint – artists who are far more at home with gritty sci-fi than they ever are with gaudy superheroes – but John Wagner remains the main man behind the genius of the Dredd strip. His stories are as sharp and clever and funny as ever, he plays the long game like no other creator in all comics, and he still gets Dredd’s voice better than anybody. 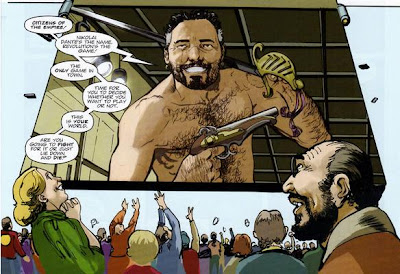 
There is a moment early on in the Wedding of Jena Markarov where Nikolai Dante is being tortured in the dungeons, and all looks bleak. The ultimate bad guy of the entire series is incredibly powerful and completely in control of the situation, and all looks lost, unless you’ve read more than a couple of Dante stories, and then you’ll know this is just business as usual.

Dante has been down in the dungeon getting tortured half a dozen times in his long-running storyline. He’ll get out, and his shit-eating grin will be plastered all over the world again, and he’ll lead the fight against utter tyranny and pure dickishness.

It takes him about 20 pages to escape this time.

I’ve made no secret of my extreme admiration of the Nikolai Dante comic, and I still think it is one of the most energetic and powerful and rich comic I’ve read in the past decade.

The story of a real rogue caught up in a long war between two enormously powerful Houses that have set the world on fire, it showed that the typical 2000ad mega-warrior didn’t have to be celibate (although, to be fair, Slaine and Johnny Alpha both got their fair share of the ladies), and managed to tell a story that balanced the awful horrors of war with some outrageous swashbuckling, which is a lot harder to do than it looks.

It’s that well-balanced mix of sex, violence, honour, humour and adventure that will be desperately missed when Nikolai Dante reaches its end soon, but it’s quite nice that a regular comic serial running for 15 years in weekly installment will reach a natural conclusion, still going out on a high.

And this final climactic serial by co-creators Morrison and Fraser is suitably spectacular – whether it’s Viktor Dante ruling the skies, or Elena Kurakin and Katarina Dante fighting side by side against the Imperial hordes for the last time, or the mutual destruction of two gigantic metaphors for the previous miserable dynasties, it’s just as spectacular as it needs to be, and I am breathless to see how it all turns out. 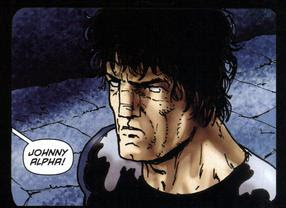 If the Judge Dredd storyline is only the latest serving in some vast and enjoyable 72-course meal, or if Nikolai Dante is now the main course of an extremely satisfying feats, then Strontium Dog is pure comfort food.

It’s just so reassuring to see Wagner and Ezquerra craft the new adventures of a resurrected Johnny Alpha with as much care, attention and humour as ever. That comfort is there when you see Johnny mingling with other mutants in the Doghouse, or when he takes half a dozen panels to work out which other Dog has been paid to terminate him, or when he quickly blasts away some real scum, or when he makes an awkward apology when the voice in his head makes him punch his only real friend in the face.

It’s also fantastic to have no idea where the story is going. Wagner and Ezquerra have been doing past adventures of Alpha for more than a decade now, but they were always weighed down the inevitability of Johnny’s final fate. Now that he is back, anything could happen, allowing all sorts of pleasurable speculation (I’m particularly fond of the idea that the voice in Johnny’s head is Nelson Bunker Kreelman, his dear old utterly psychopathic Dad, hitching a ride back into the world of the living inside his mutant son’s skull.)

Generally, resurrecting a dead comic character should be frowned upon, as every return cheapens every other demise, and makes the most tragic experience people can go through seem offensively silly. But I can’t frown at the return of Johnny Alpha, not when it’s handled so well. I just couldn’t stop grinning like a loon when I read it.
Posted by Bob Temuka at 5:07 PM

Without giving anything away, 'Day of Chaos' is getting more and more interesting as well as becoming genuinely scary as the stakes keep getting higher.
It's also the first intelligent fictional response I've seen to what's been going on in the world over the last couple of years including the Arab Spring, UK riots and the challenges of maintaining order after terrifying events like Fukushima in the face of excitable 24 hour media.
It's not yet quite capturing the fears of the age as 'The Apocalypse War' did and I'm not sure it it can when you consider that (often unbelievably harsh) story was aimed at thirteen year olds as opposed to the adults who buy 2000 AD these days, but it's the best Dredd story for a long, long time...

What Tam said. Dredd's absolute perfection right now, and the Big Meg's never looked in as much trouble; the whole system is in the balance, and I'm on tenterhooks to see what Wagner has in store.

You've also got the insanely great Zaucer of Zilk to look forward to - McCarthy and Ewing firing on all cylinders and ticking all the right boxes (for me, at least - it seems to have split the readership somewhat).