Armageddon that Flagg! (or How I Learned to Stop Worrying and Love Howard Chaykin)


Somehow, when I had a deep fever for smart and independent adventure comics from the 1980s, and was obsessively hoovering up as much of Matt Wagner’s Grendel and Scott McCloud’s Zot and Paul Chadwick’s Concrete as I could get my hands on, I managed to completely miss out on any of Howard Chaykin’s American Flagg.

I never bought a single issue of Flagg. They were surprisingly hard to find and the few issues I did see looked busy and confusing, and I didn’t know where to start. I couldn’t even quite grasp what the basic concept was.

So while I went on to follow everything Wagner, McCloud and Chadwick have done since the eighties, I never had the same compulsion to follow Chaykin, because I never read his most applauded work.

I’ve sorted that out now. 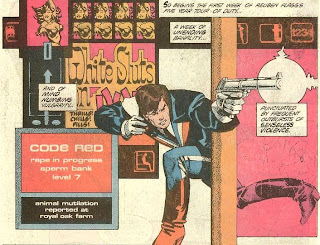 I picked up the big 2008 hardcover collection of the first 14 American Flagg comics over the past weekend, at the hideously crowded Armageddon geek convention in Hamilton (where it was being held for the first time).

It was so crowded that it took me a while to find the only two booths that were selling comics, and I might have gone a bit overboard. I went with my mate Kyle, and while he was happy with his Doctor Who autographs and insanely cheap recent X-Men comics, I loaded up on everything from Lobo to Brilliant to Doktor Sleepless to Sock Monkey. I bought far more Mark Millar comics than is healthy, got most of Ennis’ Jennifer Blood for a buck each and overdosed on a small mountain of Hellboy comics.

I also got some sweet book deals – the first two Age of Bronze collections, two X-Men First Class books, a Groo paperback and some Jonah Hex for five bucks each. But the best deal was that American Flagg book, which I got on special for $35.

Considering it cost more than $100 when it first came out, this was a blinder of a deal, and it seemed like a good way to finally give Chaykin a chance. 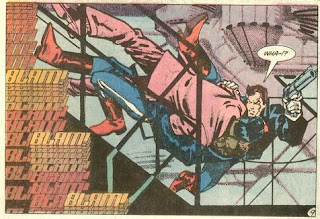 This first impression of American Flagg, and the wider world of Chaykin, is pretty positive. It’s funnier, and more tasteful, and more adventurous than I expected. It’s just as complex as I always feared, but that’s not necessarily a bad thing.

It is a comic that is nearly thirty years old, and there has been some inevitable dating, with jokes about Crystal Gale (a name I literally hadn’t heard in years until I read this comic yesterday, leaving that joke a little flat), as well as a particularly eighties obsession with things like pirate television channels and subliminal programming.

American Flagg can be over-thought and overwrought, and there are some awful, awful haircuts on display, but there is also a lot to love about the comic.

There are some terrific action scenes which are brief and full of impact. Chaykin had got the hang of decent action body language during his years in the trenches for corporate comics, and used Flagg to find his own voice.

Over the first dozen issues of Flagg, you can see Chaykin nailing down that chunky/fuzzy art style that is now instantly familiar. The artist was still not quite there, and sometimes his influences are a bit too obvious, but they are also all over the place – one bit will be pure Gil Kane, and then there will be a sudden Drew Friedman moment.

The design of the comic is unmistakably something from the 1980s, but all those sharp lines and busy pages are still effective, and there are some endlessly entertaining sound effects that compliment the entire look of the book, while still inspiring the odd chuckle.

American Flagg was a comic that was full of humour, thanks largely to Raul the talking cat and the robotic Luther Ironheart, but also because of the absurd society that Rueben Flagg and his friends & enemies lived in – a world that had become used to casual carnage, but still had a lot of the old world’s hang-ups. 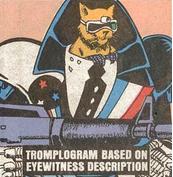 It’s still full of crazy sex scenes, but they are treated so matter-of-factly, without really dwelling on them. It’s a surprisingly mature way of dealing things (real mature, not Lobo mature) – there is no adolescent giggling. Sometimes people have sex, and they probably enjoy themselves, but while many of American Flagg’s contemporary comics were so determined to show what they can do that they somehow made sex boring, it’s just another part of life in 2031 America. 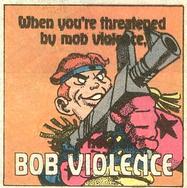 Even after reading several hundred pages in the past few days, I’m still a bit baffled by large parts of American Flagg. I still don’t understand a lot of what’s going on, and I don’t even know how to explain the core concept to somebody else – “He’s a law enforcement officer for some weird post-collapse post-government society, who also moonlights as a pirate TV broadcaster” is about the best I can do

But while the work can still be confusing and obtuse, the work is deliberately disorientating, just like all glimpses of the future should be. There can be a dozen different things clamouring for the reader’s attention on a single page, and it can take a long time to figure out what is actually the important bit. There should be some kind of information overload when you're dealing with the culture shock of the future, and there is plenty of that here.

Comics that require that kind of effort are invariably rewarding, and American Flagg ends up offering all sorts of narrative riches. There is no grand unifying theme, but loads of smaller ones, from issue to issue. American Flagg is about holding authority figures to account, and it’s about adjusting to a fast paced world that is in danger of utter stagnation, and it’s about showing compassion to the weak and defending them from bullies.

It’s about America, and it’s about a man named Flagg. 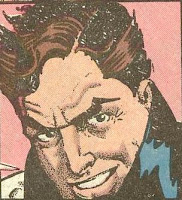 The second best deal I got at Armageddon Hamilton, after American Flagg, was a copy of Chaykin’s Time². Everything was suddenly coming up Howard.

I’ll give it a while before I get to that book, because there is real danger of a Chaykin overload, and there are all those Hellboy and Sock Monkey comics for a change of pace.

But I am looking forward to getting my teeth into Time², and I will be more open to more of his comics in the future, however strange it gets.
Posted by Bob Temuka at 6:44 PM