I can’t get rid of that


There comes a time when all semi-serious comic collectors take a look at their collections and think: ‘I have got to get rid of some of this crap’, but there also comics that are almost impossible to get rid of, no matter how hard you try.

It took me a long time to get to that purge point – I was almost 30 before I had the first serious de-bulking of my comics. By that stage, I had nearly 50,000 of them, but I was stuck in the mindset that I couldn’t get rid of them. Any of them.

But when I took a closer look, I realised there were literally tonnes of comics that I could get rid of. I barely read so many of them, actively disliked some of them and was incredibly apathetic about so many more. I was growing up and getting married and going overseas, but – most of all – I was just tired of having all that stuff around, when it was wasn’t serving any purpose.

About the same time, the ability to sell comics over the internet in New Zealand became viable, and the idea of turning all that useless paper and useless stories into cash – any cash- was irresistible. So I started on a series of purges, and got more ruthless with each one. 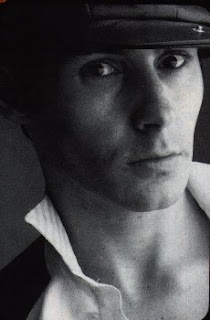 I say this a lot, but this really was something else that was all Grant Morrison’s fault. I always remember an old 2000ad which had a rare creator interview with the Scottish artist, in which he was asked what his favourite moment in comics actually was, and he replied that it was the moment he realised he could just chuck them in the bin.

I never got the hang of the total purge, like Morrison advocated, I was just too emotionally attached to too many of the bloody things, but there were still plenty of them that didn’t have that same attachment and they were out the door.

Hundreds of perfectly average post-Crisis Superman comics (including the entire Death/Return of Superman, which took me years to accumulate, but didn’t actually hold up on re-reading), entire series I had somehow managed to amass without really enjoying. (Sorry, Guardians of the Galaxy), and thousands and thousands of random comic books, from damn near every publisher there every was.

I regret getting rid of a lot of it – I still wish I had those Hourman comics, and I went looking for some Englehart/Rogers Silver Surfer from the late eighties the other day, convinced that I still had them, only to discover that I must have got rid of them years ago.

But I don’t regret it that much. It’s always nice to refine a collection down to the essentials And thanks to reprints and libraries, I can always read those Reign of the Supermen comics whenever I get the urge. And my memories of things as awful as the Bob Harras Avenger comics are surprisingly affectionate, and don’t need to be ruined by the horrible reality. 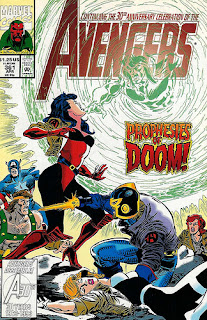 I’ve still got thousands and thousands of comic books – there are nine boxes full of 2000ad product alone teetering in a frankly dangerous two-metre tall pile in one corner of this room, and cupboards and bookcases and boxes full of other comics all over the house.

I still go through the odd purge, (I just put a big chunk of Jonathan Hickman’s Fantastic Four up for sale yesterday), but it’s getting harder and harder to get rid of any more, because they all mean so much to me.

Mostly it’s because they’re just bloody good stories that I want to re-read over and over again, but there is also a huge amount of shameless nostalgia.

There are comics that can be pretty bloody awful, but I hold onto because they remind of a specific time and place in my life, and I never want to lose that. Things like the first two years of New Warriors, which I will always hold onto - mainly because they represent the absolute zenith point of my comic obsession more than any other comics I own.

And there are some random comics that I picked up over the years, that aren’t even as gaudily entertaining as the New Warriors, that are pretty average, and have little real nostalgic value. And while I’ve got rid of the vast majority of them, there are some that I keep putting in the dumping pile, only to keep saving them from that fate at the last second. 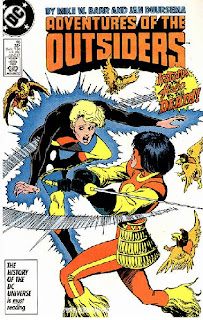 Adventures of the Outsiders was the last issue in that weird experiment DC tried with the Outsiders in the mid-eighties, where three of the company’s team books became deluxe direct-only books, and the comics were reprinted a year later on newsprint for newsstands.

It was never going to work – you’d end up with weird things like Jason Todd showing up in a new Teen Titans comic after he’d just been blown up by the Joker – and the reprint comics all disappeared within a couple of years.

Issue 46 was the last Outsiders reprint issue, although its deluxe edition lasted a lot longer. It focuses on the female characters in the super-team, who end up in an adventure involving weird little Japanese mystic birds and some body-hijacking. It was – as usual – written by Mike W Barr and featured guest art by Jan Duursema.

Even though I am a total fiend for both Jim Aparo and Alan Davis art, this somehow ended up being the only issue of the Outsiders that I ever owned. And I can’t get rid of it.

There is some nostalgic value, to be sure. I bought this comic as part of a special comic pack from a Dunedin supermarket that doesn’t exist any more, about six months after the comic was published.

That pack was a gem – I also got Uncanny X-Men #219 when I was an absolute X-zombie, and the last issue of Miller/Mazzuchelli’s Batman: Year One, which was my first real exposure to the glory of Frank Miller.

The Outsiders comic was the runt of that lot, but it’s still sitting right here on the desk beside my computer, 24 years later. Even though it went on the ‘sell’ pile so many times, it’s still there.

But it isn’t the nostalgia factor that keeps saving it. I’ve still got those X-Men and Year One issues to remember that particular slice of my life. It is the fact that it’s actually not a bad comic book.

It’s a densely packed, done-in-one story, showing that girls don’t always need the boys to save them. It’s actually pretty weird, and it literally took me years to really understand what was going on, with all the magic birds and mind-swapping.

And the art, by the incredibly underrated Jan Duursema, has a soft vibe that overcomes any young clumsiness, and remains charming, while also bringing some serious sexy. (Katana never looked more beautiful….) 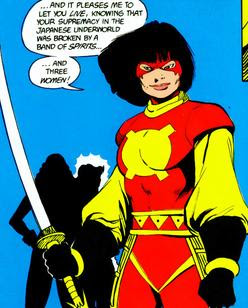 The latest purge is going quite well, and I should get rid of three or four hundred comics in the next couple of weeks, and make enough money to go spend when I go to Armageddon in Hamilton with my best mate.

But the Adventures of the Outsiders #46 is going back in the box of other miscellaneous DC crap that has survived the purges for various reasons. I can’t get rid of it.

Don't worry, I got a whole bunch of crap in my house I can't get rid of either. People ask me straight up why, when they're just collecting dust in a box in a corner of your life and I just...I really don't have much of an answer for them. I just refuse to get rid of them.

I CAN'T get rid of them.