There wasn’t enough brown in my Flex Mentallo

Even though I knew it was coming, it was still surprising to actually see a Flex Mentallo: Man of Muscle Mystery collection on the shelves of the local comic store. I remember seeing a solicitation for that book in a previews catalogue back in the late nineties, and the constant delays and baffling legal action made it look increasingly unlikely it would ever get released.

But there it was, sitting on the shelf in a snazzy new cover by Frank Quitely, ready for a new generation of readers. 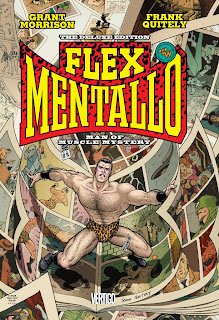 I have a long and sordid history with Flex – for a couple of years it was my absolute favourite comic in the universe, and I would read it at least once a week (usually while drunk or stoned), and find something new every time. I bought the last copy of the first issue at the last minute from Bag End Books in Dunedin, fell in love with the series with the silent scream in space at the end of issue #2, and intentionally destroyed my original copy of #4 in some cack-handed attempt at a magical sacrifice.

So I know Flex Mentallo reasonably well, and the very first thing I noticed when I actually looked through the book was that it had all been re-coloured, to make it look more like a big serious comic with big serious themes, when the last thing you should accuse Flex Mentallo of is seriousness..

I understand why they do it. It’s a deluxe hardcover, and in order to justify the spiffy new treatment (and spiffy new price), somebody decided the comic needed a new paint job. I know Quitely was never happy with the original colours, and colouring technology has come a long, long way in the years Flex was trapped in that legal limbo.

But while the new colours really do give the artwork added depth, and are generally exceedingly tasteful, I do think it’s a pity there isn’t the option of getting the story in its original, four-colour garishness, because I still think the original work was far better. 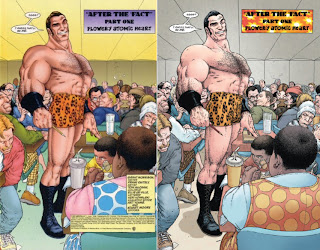 I’m not saying comic creators and companies shouldn’t recolour their old comics. There have been some very successful recolouring efforts over the past few years, and besides, it’s their comics, they can do what they want with them.

But I would be lying if I said I thought the recolouring of Flex Mentallo was an improvement, because I really don’t. The added texture and depth does come at a cost – the original colouring was often garish and occasionally tasteless, but most of the superhero comics Flex was paying homage to were often garish and occasionally tasteless. These original colours – so harsh and bright - gave Quitely’s exquisite pencils an added bounce and optimism that the Hero of the Beach can only have approved of.

All those bright yellows and pinks and neon blues might look a little dated now, but they’re all more interesting than the gradients of brown and grey that replaced them. 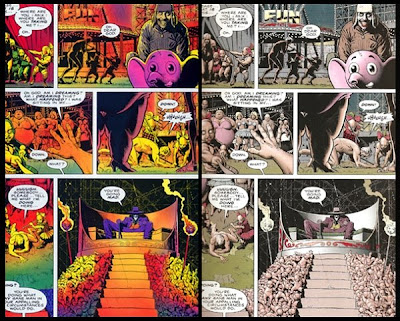 Comics have been recoloured and repackaged since the very earliest days, but stunning advances in digital colouring over the past 20 years have encouraged comic companies to put out new and shiny editions of old favourites, with some snazzy new tones.

Sometimes it actually works, but sometimes it doesn’t, and sometimes you end up with something like the recoloured Killing Joke from a couple of years ago. Like Quitely, Bolland was always a little disappointed in the original colours, but that was no excuse for the painfully dull new tones.

The greens, purples, oranges and yellows of the original book might have seared some eyes, but they were only fitting for a story about the Clown Prince of Crime. And while they have certainly dated, it’s slightly alarming to see how dated the recoloured stuff already looks, just four years after it was done. All those grey washes and tasteful rendering, and no pesky yellow Bat-emblem.

The sickly greens and oranges of the original Killing Joke may have been an unwanted by-product of the printing technology of the time, but they became a striking example of gaudy comic brilliance – a story about the Joker should never be that tasteful. 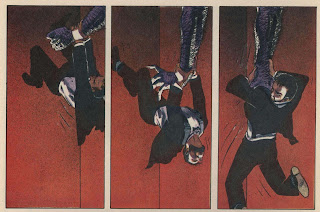 It is interesting to note how re-colouring efforts can quickly look just as dated as the original. The 1998 reprints of Matt Wagner’s first Mage series featured some lovely new tones that got rid of the fuzzy 1980s pastels that saturated the first printings, but – fourteen years later - the nineties efforts look just as dated in their own way as the 1984 work. 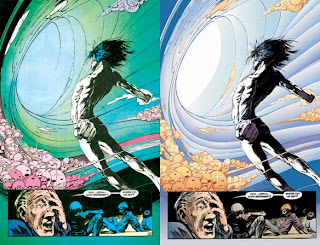 It’s not all bad on the recolouring front - one genuinely good job of recent recolouring is the early Sandman comics. The first couple of years of the Gaiman title featured bold attempts at a sweeping colour palette that just didn’t work, and are now almost painful to look at, with Sam Keith and Mike Drinenberg’s art saturated in thick swipes of dark colour.

But – thanks to some sterling recolouring work - the art in the first Absolute Sandman edition is beautiful, as if somebody has wiped a thick layer of film off a renaissance masterpiece. Keith and Drinenberg’s organic art gets to breath and stretch out under the new palette, and stories like The Sound Of Her Wings and Tales in The Sand, or the whole bloody Doll’s House look beautiful.

It's a suitably thoughtful recolouring job that doesn't just assume that brown = serious, and makes the art so much more enjoyable to read. 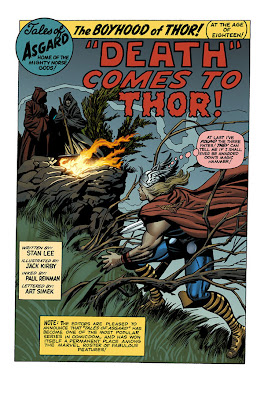 I was also surprised by how much I enjoyed the modern recolouring on some of Kirby’s Thor comics. There were a couple of books that came out last year to cash in on the movie that featured some of Kirby’s finest work from the 1960s, all drenched in 21st century colours.

It shouldn’t work, but the simplicity of the original Kirby colouring was designed to work on the newsprint page, and giving it some 21st-century touches gives these fifty-year-old pencils a new vibrance. New shadings and effects fit surprisingly well with Kirby’s blunt force brilliance, and it’s not hard to imagine the King making full use of things like Photoshop if he was still with us. . 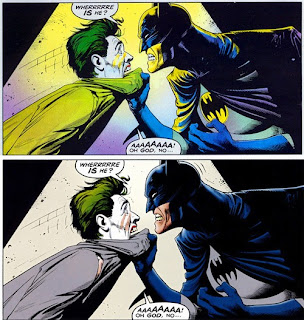 I’m generally not bothered by colour; growing up on a steady diet of black and white comics (usually cheap British boys comics and cheaper Australian superhero reprints) means that while I can always appreciate a good – or even stunning – colouring job, I never think of it as indispensable. And as ugly as I find the new colouring on both Flex Mentallo and the Killing Joke, I still think they are great comics that rise above these dull tones.

But just because these things can be recoloured, doesn't always mean that they should be, and endless tinkering might lead to short term gains, but ultimate devalue the original work. And making crazy superhero action look as realistic as possible through 'proper' recolouring jobsisn't always a great idea, not when they are built on a foundation of four-colour fun.

It's a weird one. I haven't seen much of the recoloured Killing Joke, but outside of the nightmarish funfair scenes (and the yellow logo, damn it) I imagine a case could be made for a more subtle job, given that it's a pretty sombre and 'realistic' story (as I recall, the flashback scenes were already quite muted). But with Flex, those dayglo colours were always an integral part of the comic for me.

I appreciate the effort that's gone into the new edition, and I'm delighted to see it available to new readers, but sadly when I think about the recolouring it leads me to speculate what a similarly 'enhanced' Doom Patrol would look like, and that's a depressing experience.

Absolutely. While I'm not a fan of the new colouring, Flex Mentallo is so much more than bright, shiny colours, and nobody should be put off buying the new edition.

Dreadful shame the Flex trade left out the two text pieces from the back as well. Hilarious stuff, featuring one of my all-time favourite Grant Morrison lines: "Something like you should live in the sea, not in a room."