The death of Jean Giraud this week is a great loss for both comics and wider popular culture, but his art and influence will live for a long, long time to come.

The brilliant French artist – who died from cancer at the still-too-young age of 73 – had a passion and enthusiasm for making his utterly unique comics until the end. As Tom Spurgeon noted, he was one of a handful of artists that could be seriously argued as the world's greatest living comics-maker while still alive, and even that barely covers his accomplishments.

Giraud produced a stunning amount of stunning work, both as an artist and a writer, over a period of decades, creating an incomparable body of work that will continue to be studied and enjoyed for as long as all of us will live.

Jean Giraud has gone, but Moebius will live forever. 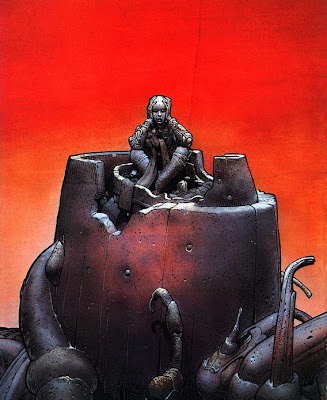 But while all right-thinking people can agree on Moebius’ brilliance, it is still pretty astonishing to note how much of the artist’s work has not been produced in an English edition, and there are vast amounts of his exceptional comics that still await translation.

There was a brief flurry of terrific reprint material in the late eighties and early nineties, with Epic gleefully putting out several decent – and sadly short-lived – titles, but there have only been sporadic reprints since then. Chunks of Blueberry in thick digests show up in the strangest places, and there are a handful of sumptuous albums from Humanoids, including Madwoman of the Sacred Heart and The Incal books.

This web page takes a pretty good stab at cataloging the English reprints of Moebius’ work, and while my head starts to spin when I try to understand it all, the one thing I can figure out is that there is a shed-load of Moebius comics that have never been translated, and remain unknown to an English-speaking audience.

Consider Inside Moebius, a 700-page autobiographical comic that was the great man’s last big project. It features the artist interacting with his own characters, including Blueberry, Arzahch and Major Grubert, and it doesn’t look like it will be available in English anytime soon. 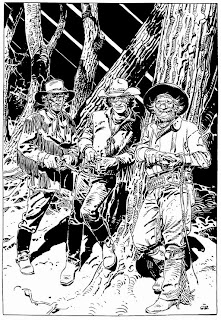 And that lack of Moebius comics in the English market is a terrible shame, because there is nothing quite like a Moebius comic.

It could even be argued that Moebius is one of the great hidden architects of the modern world, with his craziest ideas slowly filtering through into mainstream society, in fashion and trends, and becoming the norm. He dabbled in production design on all sorts of movies, and inspired all sorts of creators in all sorts of fields, influencing dozens of terrific comic artists over the years in both Europe and the US. It’s easy to pick up an issue of Jim Lee’s Justice League comic – the biggest selling comic in the US market at the moment - and find Superman or Green Lantern rocking the Blueberry squint every now and again.

His stories could be infuriatingly complex, or pleasantly simple, but they were always gorgeous – moments of transcendent beauty and moments of dirty, ugly humanity. His comics could be insanely detailed black and white wonders, or covered in sweeping colour washes that found new hues unseen by man. His art kept its feet on the ground as it reached for the stars, and sometimes it managed to grasp those distant fires and bring them down to us on the comic page.

Moebius’ comic art has such clarity and craft that it is possible to read them in their native language without understanding any of the words. You do miss the details of the story, but you get the broad strokes, and it’s hard to complain about that when these strokes are so wonderful. 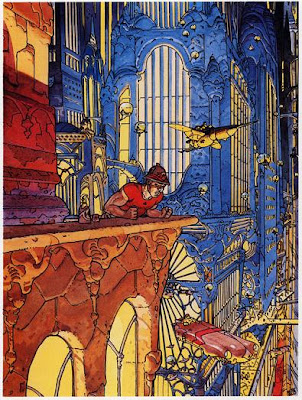 Still, I know I’m always up for some translated Moebius comics. I’ve got a few scattered albums, and a sizable chunk of the various Epic efforts, but I would love to get my hands on a cheap and chunky complete collection of Blueberry comics. (If we can get Showcase collections for Robin the Boy Wonder and the Trial of the Flash, why can’t we get one for Young Lieutenant Blueberry?)

I can wait, because I know someone will get around to it. This a golden age of reprints, when all sorts of esoteric comics are appearing in comprehensive collected form. One day some publisher will realise there is actually a market for a something like for a translated collection of Inside Moebius. A deeply personal comic by a goddamn legend, featuring many of his favourite characters, told over a decade and hundreds of pages? How could anybody ever possibly be interested in that?

Giraud’s death is undoubtedly a sad event, and we should all mourn the loss of this ultra-singular talent, but there can also be celebration in all that mourning. He spent his life crafting a baffling variety of stories in an incredible array of styles, he grew and matured as an artist and remained a true experimentalist until the end, inspired a legion of new artists trying to find their own voices.

His comic pages are full of pulse-pounding action, existential transcendence, daft humour, sickening horror, and full flights of the imagination into new and bizarre mind-spaces, and it’s all brilliant.

In interviews towards the end, Giraud certainly showed few regrets in his life. It’s always nice when somebody gets to see that they managed to leave a legacy before they move on from this world, and Giraud always seemed affably baffled about his own success.

It’s also nice that he has left so much behind, and there is so much more to be revealed, especially for an English audience. It might take decades for all of Moebius’ comics to appear in an English translation, but that just means his work will still seem new and fresh and interesting for years to come.

And considering some of his work might be centuries ahead of his time, we might not be catching up with Moebius for a long, long time.

Rest in peace, Jean Giraud, because your ideas never will. 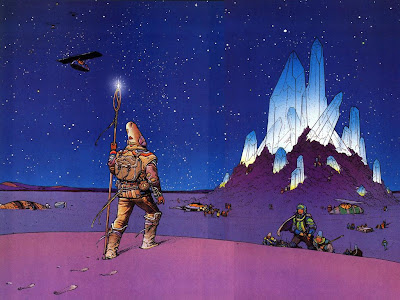