Down in the DMZ

Brian Wood’s DMZ series from Vertigo reached some kind of a natural conclusion late last year, but it had faded from my interest a long time ago, and I didn’t even notice it had gone.

It wasn’t until last week that I read the last couple of issues, and saw how it all turned out. Which is weirdly disappointing, because I really, really wanted to like DMZ, and I just never could.

I tried DMZ cold – without reading any of Brian Wood’s earlier comics - because I was in the mood for something new, and liked the sound of a story about New York becoming an absolute war zone. I was only getting two or three monthly comics regularly at that time, and they all featured creators I had been following for a long, long time. I knew I was in safe hands with these writers and artists, but I needed something new.

A lot of good things had been said about Wood’s work, but the concepts behind books like Demo and Local just didn't grab me. But with DMZ, there was something else. The idea of living in a war zone, a place that was once safe and secure, but had now been turned upside down, has been at the heart of dozens of good tales in a number of different mediums. (Including my adolescent brain, which constructed one of those hideously complicated tales set in my home town and based on whatever GI Joe figures I could get from the local stores.)

So with a creator I was keen to try and a concept I was interested in reading, it appeared the stars were in alignment and I was away.

Three years on and I bought my last issue of DMZ, and didn’t get any more until the very end (although I’m still vaguely following the story through library copies.). I tried - I really tried - but I just gave up on the comic. I still had a soft spot for Riccardo Burchielli's gloriously messy art, and I liked some of the places Wood was taking the story. But it was also going into areas of dull and self-important predictability, and in the end, crucially, I just didn't care about the main character.

Matty Roth was a fairly typical character in modern comics, a pretty ordinary young man thrust into extraordinary circumstances. As a young reporter in the middle of the second American Civil War, Matty started off idealistic, a little naïve, a little hip, energetic, self-righteous and committed,

DMZ was the story of a nation at war, of the horror that generates and the lives it destroys, and of the political complexities it created. But it was also Matty's story, but if I didn't care what happened to him, I couldn't go on. I'd seen it all before and will again.

It was particularly noticeable when Wood abandoned the six-issue storyline pattern that chokes modern comics and told a series of done-in-one tales featuring different characters from the series. At first it actually felt like a relief to get away from Roth a bit, until I realised that most of the characters in those stories were idealistic, a little naïve, a little hip, energetic, self-righteous, committed and more than a little familiar.

At about the same time I quit DMZ, the same sort of character showed up in Anthony Lappé’s generally well-received Shooting War. Jimmy Burns, the main protagonist, is almost exactly the same character: an idealistic, naïve, hip, energetic, self-righteous and committed young man, fighting for the truth from inside in a horrific war zone. Despite the odd piece of sloppy storytelling, Shooting War managed to get the result it was after, but there wasn’t much need another version of the same character to take that journey.

In Shooting War we occasionally get glimpses of veteran broadcaster Dan Rather, and I couldn't help but wish the story would follow him. The grizzled veteran, rather than the newbie. The new guy might make sense narratively, learning life lessons and plot turns at the same time as the reader, but that doesn't mean something else can’t be tried.

Of course, with purely anecdotal evidence pointing to the typical Vertigo reader as a young, hipper-than-thou sort, it shouldn't really be that much of a surprise that the main character should be a reflection of the readership. This is a comic trick that has been used heavily ever since Robin pulled on his short shorts, one that presumes that audience identification is one of the most important parts of a character.

But Matty Roth’s point of view just seemed too simplistic, and as DMZ went on, Roth became even more unlikeable, especially when he got deeply involved with the politics of the thing. I can even pinpoint the moment when I finally stopped giving any kind of shit about the character – when he was seen screaming at somebody to turn a camera off because he didn’t like what they were filming, while slinging a rifle, and went from being somebody trying to uncover the undeniable truth of the situation to just another idiotic zealot willing to do terrible things in the name of another dubious ideology. Unsurprisingly, not long after that, he ordered the deaths of a group of people he thought had attacked him, and became somebody who could rot, for all I cared. 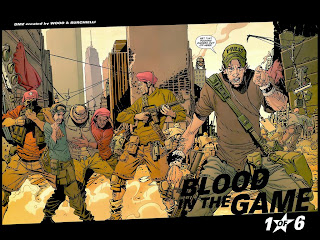 I gave up the comic not long after that.  The actual storylines were still occasionally interesting enough, but were nothing that anyone with the most basic knowledge of international conflicts wouldn't see anywhere else, and were just not enough for me to justify buying the comic every month.

I have followed the story since, half-heartedly reading the next trades, thank to the local lovely library, but in the end, it was more disappointment than anything else. Roth did finally come to his ideological senses, but it was too little, too late. I was somewhat relieved to see that in the last couple of issues, he had finally accepted responsibility for his actions like a grown up, but he still played up to his own martyr complex. Matty Roth was consistently insufferable to the end. 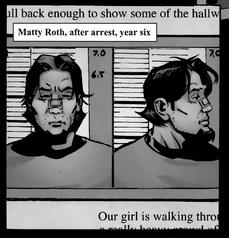 There weren’t a lot of laughs in DMZ, and while it is hard to find humour in the bombs falling, the unrelenting grimness and seriousness exemplified by Matty Roth was no fun to hang out with, producing no life or vigour.

My ultimate disappointment with DMZ is largely my own fault – I can’t complain about the fact that it didn’t give me what I want, because that’s what I always want stories to do.

But I still feel the greatest fault of the comic was that it never really lived up to its potential, focusing on dull, predictable and ideologically dubious aspects of the demilitarised zone, rather than highlighting the lives of the people scraping out a life under the hail of steel. That's where the real stories were, but DMZ wasn't really interested in that sort of story.
Posted by Bob Temuka at 10:01 AM

Read the first book but can't remember much about it except thinking nice art but 2000 AD does this sort of thing much better!