It’s always a little bit disappointing when the Giffen-DeMatteis-Maguire-Hughes-Templeton-Medley-Hefler Justice League is written off as all jokes, no feeling - because you can get so much more out of it than the bwah-ha-ha’s.

There is no denying that it could sometimes be a sublimely goofy comic, but it’s easy to forget that after years of terribly serious Justice League comics (that came to a dead end in Detroit, it was a welcome change of pace to have a few laughs at that time.

Especially when the 60 issues of Justice League/International/America – published between May 1987 and March 1992 – were crafted by creators with impeccable comic timing, an occasionally sublime depiction of exaggerated body language and some terrific banter.

Whether it was Mister Miracle's embarrassment after he came crashing through every floor of the Justice League embassy after assuming the roof could take the weight of the League's transport, or Guy’s adoration of General Glory, or the ongoing humiliations of poor old Blue Beetle, or the infamous 'one punch', or Kooeykooeykooey kurrency, or the skill of the punch-line set-ups that filled almost every issue, there were plenty of chuckles to be found. 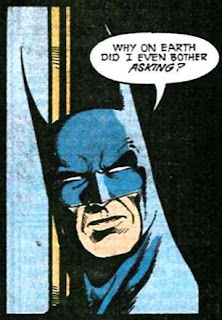 Born out of Legends, another fairly dire mega-crossover, Justice League International quickly found its own feet as a quirky, charming and occasionally dead serious superhero comic somewhere in the late 1980s. Rising from the ruins of the Detroit League, who were all systemically and heartlessly wiped out by mad old Professor Ivo, it brought together a group of DC heroes that managed to seem both entirely random and meticulously planned.

There were the standard old faces like Batman and the Martian Manhunter, some new characters to the League like Blue Beetle (recently arrived from Earth Charlton), Mister Miracle, Guy Gardner and Booster Gold; and a mix of both with the all new-all different Doctor Light & Black Canary, and Captain Marvel.

The series started off as a typically earnest and surprisingly silly late eighties super-comic, with the team taking on nuclear terrorism and the Royal Flush Gang, but under Giffen and DeMatteis' guiding hands, it quickly became something else. 'Moving Day' in issue eight helped set the template for the rest of the series, with the creators - and readers - having just as much fun with an issue focused on the heroes moving into their new headquarters as they would with another supervillan punch-up.

Not that there was any shortage of punching, with even team members often taking a swing at each other, but it was the quiet issues of Justice League, in-between the big battles, that gave the book most of its charm. Things approaching tenderness and genuine feeling could be found here, like the oddly touching sweetness of the Guy/Ice relationship, or moments where good friends were mourned. 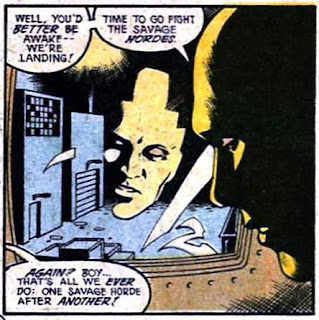 But while it was undeniably goofy and arguably moving, it could also be deadly serious, and racked up a horribly high body count for a series remembered mainly for its giggling fits – entire villages of innocent Europeans were wiped out, Despero suddenly became some sort of avatar of homicide and slaughtered a hero’s family, and a street thug corrupted by an Apokalyptic mega-rod murdered dozens of his friends and even more policemen.

All that grimness was made darker by the lightness of other moments, and gave everything some context.
And it wasn’t just a case of goofy or grim, this Justice League worked on a number of interesting levels - some of the Biayalan mind control moments were truly disturbing, and the first Grey Man’s mission to de-saturate the world took an unexpected emotional term when he actually got what he wanted, as Giffen's mad ideas medlded perfectly with DeMatteis' humanism to create something new.

All of this was rendered by a cracking art team, with the usual brilliance of Magurie replaced by the lovely flowing lines of Adam Hughes. Linda Medley did some lovely work in the last couple of years, names like Mike McKone started to pop up, and there were interesting efforts from some slightly unexpected artists like Trevor Von Eeden or Kyle Baker. 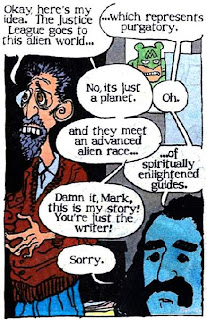 This high quality of art is one of the signs of the brilliant work of editor Andy Helfer – the great unsung hero of this particular slice of comic history. As well as picking the right artists for the right story, Helfer also knew how to balance out the light and dark stories, and, most importantly, knew when to cut back on all that fabled dialogue.

His ruthless cutting pruned out a lot of it, and you only have to look at the new efforts by Giffen, DeMatteis and Maguire that came out in ‘03 and ‘05, where the stories started staggering under the weight of their own cleverness, with no editor willing to tell these comic legends that they need to wipe out at least half of their precious dialogue. 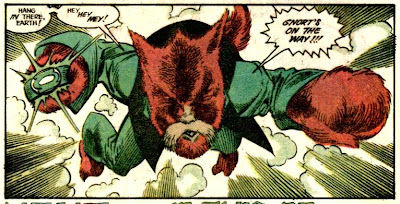 But even with all its faults, this Justice League still has its own style that make sit endlessly enjoyable.  The DC Universe was an interesting place during these years it ran, where superhero comics were changing into their adolescent phase, and willing to try anything.

By the time Justice League #1 debuted, the DC Universe had got far enough past the Crisis on Infinite Earths to have complexity, without becoming convoluted, while it was also a period where individual point of views from creators actually seemed more important than corporate visions, (a status quo that lasted for at least a couple of years before the monetary-based status quo slotted back into place).

So this was a comic that could have desperate battles to save the world rubbing up against off-kilter appearances by Darkseid (chilling with a cup of tea and a copy of Mein Kamf), or a night out on the town with G’Nort and Kilowog.

The surprising success of this style and tone invariably seeped into the wider DCV universe – this Justice league led the way into Invasion, still one of the most creatively successful crossover events, and the bantering dialogue suddenly appeared in all sorts of DC books.

This kind of bickering banter did feel new and interesting at the time. This style was well established in TV sitcoms, but rarely appeared in superhero comics, and under the right hands, it turned out to be a very neat fit. It might not have been for everyone, especially when comic readers were used to heroes showing their emotions by the way they put their hands on their hips.

The endless banter even got the better of some characters, with both Hawkman and Booster Gold unable to take it any more at different points, the characters speaking for readers who were upset that this wasn’t “their” Justice League, who still longed for the days of posing and gritted teeth, and just weren’t comfortable with an angst-free superhero.

But the great thing about super heroes is that there is plenty of room for all sorts of interpretations, and the Justice League’s  mixture of utter seriousness and utter silliness meant that over that five years, anything was possible, including the ability to care about these super people.

This was the most amazing fact about this incarnation of the League - even though he was an insensitive and boorish jerk, you actually liked Guy Gardner, or you cared about Blue Beetle’s waistline, or you wanted Booster come back to the team – where he belonged. 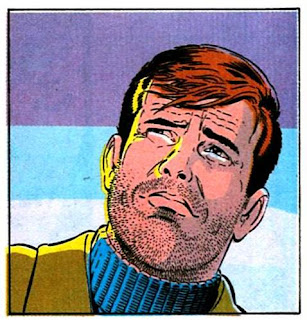 All that affection for that period of the Justice League has been strip-mined away in the years since, blown away for cheap shocks and idiotic reboots, with the most obvious use when Max Lord was revealed a master villain in a black polo shirt, callously gunning down poor ol’ Ted Kord.

Turning Max into a dull supervillian was supposed to be some great, clever twist, but it just made me feel like a fool, because like all the DC superheroes, I actually gave a shit when Max was shot and nearly killed in Breakdowns.

He sure fooled me, and it can’t help but retroactively tarnish the original stories. There have been periodic attempts to rehabilitate the characters that appeared in this Justice League run, and tap into any of that fondness that may still exist in current readers.

Unsurprisingly, the most successful were the (still-flawed) I can’t Believe it’s Not The Justice League and Formerly Known as the Justice League, but any other attempt to integrate these more light-hearted characters into the dark and moaning normal DC universe in the past decade are doomed to failure.

There is no place for a light touch here. (This includes the current New 52 effort by Dan Jurgens, which misses the point of all those original stories with spectacular cluelessness, but which shouldn’t come as much of a surprise, with the same writer leeching most of the fun out of the Justice League as soon as Giffen and DeMatteis were done, nearly 20 years ago.)

I came late to the JLI. Even though I got the first issue when it was brand new, and picked up the random issue every now and again, I didn’t start getting it every month until the last year of the run, and almost all of my collection was collected out of back issue bins.

It took nearly a decade to fill those gaps (and even now, I’m short a couple of issues of the Justice League Europe), and I’ve never been tempted to get rid of any of this issues in the periodic purges of my superhero comics.

Because these Justice League comics still make me laugh, and they still make me care about the characters. Two decades after they first started bwah-ha-ha-ing, these comics have stood the test of time with humour and humanity.
Posted by Bob Temuka at 4:42 PM

Completely agree about Helfer not getting the praise he's due. As well as The Shadow, he also did the series Batman : Journey into Knight, which vanished without trace but that's a shame; I thought it was pretty much the only Batman book in about ten years, (aside from Gotham Central which doesn't quite count) that I liked enough to keep...

The Shadow still holds up well, and I'd be interested in reading that Batman comic. I'm not a fan of his efforts on the DC Judge Dredd comic, though. They were well-intentioned, but still horrible.

It's also one of my all-time favourites.
As you point out, it's often the quiet moments between the mayhem that really made this series so special.

I'm glade I have the four Hardcovers collections DC put out a few years back, I'm just bummed out they stopped it before the Adam Hughes issues.

I loved this version of the JLA and I loved the Max/Ted shooting. I just re-read it and it still holds up for me. Ted was never better than in that issue and it summed up perfectly how he and the rest of his team mates were viewed.

The thing that ruined the Bwa ha ha league for me was the killing of Sue Dibney in Identity Crisis right in the middle of the I Can't Believe It's Not the Justice League run (or the other mini - not sure which). If the mini was complete I wouldn't have minded, but I got soured on it.

Still love to read that series - thanks for the great article.