When I get obsessed with comics and books and TV shows and movies, I want to know everything about them. When that obsession lasts more than three decades, I soak up a whole lot of information.

I have spent a significant amount of his life with my nose buried in a Doctor Who reference book, and I can honestly say that Lance Parkin’s aHistory – a comprehensive history of the Doctor Who Universe – is easily my favourite. 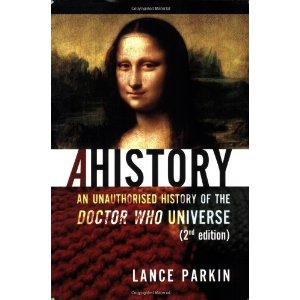 After all, by the time I was born, the Doctor Who production team had created 12 years worth of stories, and there was a lot more to come over the next decade, and I could barely keep up with it all.

Target novelizations were excellent for reading about past Doctor stories, but even though those books were everywhere, there were still vast sections of Who continuity that I was painfully unaware about.  (The fact that Target books sometimes had completely different names to the televised stories didn’t help.)

But reference books offered a better glimpse inside Who continuity. A classic magazine produced by the Radio Times for the show’s 20th anniversary was my bible for years, and I literally read that thing to pieces. Whenever I think of a particular point in the series history, I automatically think about its position on the pages of the episode guide in that magazine. (I’m not joking – I always think of the Key To Time stories as the ones going down the right hand column of one page, and the Dalek Invasion of Earth is sitting at the top of the second page in the guide.) 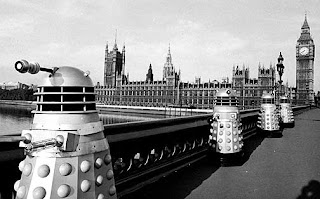 Over the years, there have been plenty of Doctor Who reference books to help fit in the gaps. Some of them were a bit too fixated on the behind-the-scenes stuff (which was always fascinating, but there are only so many times you can hear the same old stories of creating such wonder on an incredibly small budget), or offered up dodgy background material that didn’t always conform to anything else in the series (like The Gallifrey Chronicles and Cybermen).

My favourites were the ones that focused on the stories, rather than the production or anything else. I wanted to know about the Doctor’s adventures, not about the special silver paint used to colour the Cybermen’s shoelaces.

So when Lance Parkin’s chronological stab first got a decent printing from Virgin in 1998, I was always keen, and I must have read that book all the way through a dozen times. 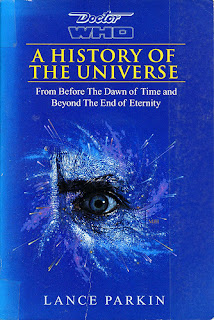 It put all the televised and novelised adventures – at that time – into order, starting with an older universe containing its own Time Lords and its destruction with Event One back in 13,500,017,903 BC, and ending with our own universe consumed by its successor, the realm of Saraquazel.

Considering how obsessed I was with the Virgin New Adventures at this time, without actually being able to get my hands on the majority of titles, it was an invaluable resource, and it was a real kick seeing ho wit all stacked together, all the Doctor’s adventures in Time and Space with his ever-resourceful companions.

But in the decade that followed the publication of A History of the Universe, the amount of Who material increased by an incredible amount, with new television, novels, audio adventures and comics.

It’s almost impossible to keep track of it all. The audio plays from companies like Big Finish have had spin-offs of spin-offs, with whole series of non-Doctor adventures taking place in the same universe.

It’s easy enough to just follow the TV show, (although with the Moffat’s tendancy for intricate time-twisted solutions, even that can be asking a bit much sometimes). But with all this other new material, I just can’t keep track. I’ve never heard Evelyn Smythe's voice, or read a third of all the comics produced in the past five years. 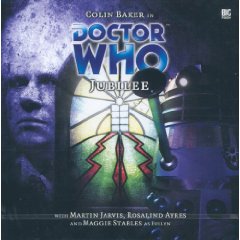 But I have got aHistory, and that helps a lot.

If I want to check out how many times the Doctor was on the Titanic, or what exactly he was really up to during World War 2, it’s all there. Any voyage the Doctor has taken on screen, or page, or through speaker, has all been catalogued and put in some kind of order. (Well, every adventure up to the 2007 second edition of the book that I have. There has been even more since and an update is inevitable.)

It’s a massive, thick and detailed work, and I’m surprised Parkin produced it without going totally mental, found in a corner somewhere gibbering about the 1980 reference in Pyramids of Mars and how it relates to Sarah Jane’s birth date. 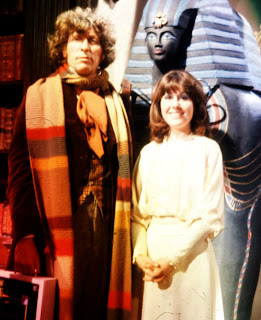 Because he’s dealing with a chronology that involves the entire history of the universe, created by hundreds of writers over all sorts of mediums. There are inherent inconsistencies that just don’t match up. The New Adventures had the world decimated by plague and war before 2010, when the Eleventh Doctor was wandering around a completely recognisable world.

Chronology only becomes a problem when you take it too seriously, and Parkin treats these inconsistencies with some half-hearted explanations and a bit of a shrug, which is the right way to go about it. There has been an extraordinary debate over the past four decades regarding the UNIT years, and Parkin has to deal with it. His solution doesn’t make a lot of sense if examined too closely, but it’s a game effort.

Parkin – who has also written some very fine Doctor Who novels over the years – shuffles everything in some kind of order, while gleefully pointing out the inconsistencies, and wrapping them up with closed-off alternate timelines and the fact that the Doctor is a terrible name-dropper who is prone to extreme exaggeration. It almost all makes sense.

All this passion and research is poured onto the pages of aHistory. It just goes on and on, dense with information and hidden meaning. I might not be able to afford all those Big Finish productions, or follow all those expensive Doctor who comics with the poor art, but I can still use this one book to see how all those adventures play out.

It’s not the sort of book that you can burn through in one sitting – my lovely wife gave the book to me as a Christmas present last year, and after reading it steadily for most of the year, I’m still only up to the 23rd century.

But it is a book built for dipping in and out of – and an ideal travel book (It is big and bulky, but I have never, ever complained about the weight of my books.) Parts of a long road trip around the American desert earlier this year are seared into my brain alongside earnest consideration of whether a Cyberman Empire actually existed, or whether there are more than one Dalek timelines. 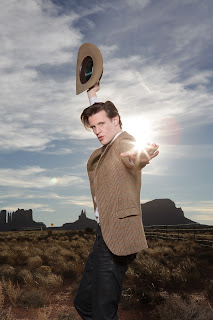 (A couple of months later, I watch a new episode and see the Doctor sitting in almost the exact spot in Monument Valley where I stood in February during that same trip, sparking a chain of unlikely coincidence that climaxed when the Doctor literally made a house call in October. Not a dream, not a hoax, not an imaginary story.)

Back in the day, when you couldn’t see old episodes anywhere, you could only read about them, and dream about them. It was years before a repeat of a William Hartnell story showed up on television, and all I could do was soak up plot synopses and faded photos in old magazines. They were enough to spark the imagination, and while the actual productions often turned out to be slightly awful when I finally saw them, I still love the stories.

aHistory taps into that feeling – and I spend more time than I’d like to admit wondering what that Zagreus business was all about, without hearing a single Eighth Doctor audio that didn’t have Lucie Miller in it. It’s that feeling that there is always more to read about, always new adventures in time and space to follow.
Posted by Bob Temuka at 11:31 AM

If you've never heard a single audio with Evelyn in it, you're missing out badly - she's the best companion ever, bar none. I wouldn't recommend you get all the Big Finish audios - they're *incredibly* patchy - but at the same time the best of them are among the very best Doctor Who stories ever made. On the other hand even those of us who've heard Zagreus have no idea what was going on there. It's an incoherent mess, frankly.

Try these few - most of them are pretty cheap now, as they're mostly quite old:

Doctor Who And The Pirates - (6/Evelyn, a musical with Bill Oddie in)
The Kingmaker (5/Peri/Erimem) - has one of the best cliffhangers ever, though I think it's spoiled in AHistory. Very funny.
Peri And The Piscon Paradox - a Companion Chronicle narrated by Peri, featuring both the Fifth and Sixth Doctors. Adds another wrinkle to continuity, and is beautiful.
Jubilee (6/Evelyn) At least a million times better than Dalek.
Davros (6/Davros) - Best Davros story ever.
The Holy Terror (6/Frobisher) - Because it's got Frobisher in it.