A week of moaning #2: A lack of impact and a failure of craft

The full-page spread has been stripped of all its power, and it’s time to think of something new, or at least give it a rest for a while.

When the good lads at the local comic shop had a decent sale recently – offering brand new American comics at cover price, which is about equivalent to 67 per cent off – I took the chance to pick up things like the Superboy’s Legion 100-page special by Alan Davis and some random Hellblazer, and finally complete a run of Mark Millar’s Ultimates comics. It was also a lot easier to try something new, like the comic adaptation of A Game Of Thrones. 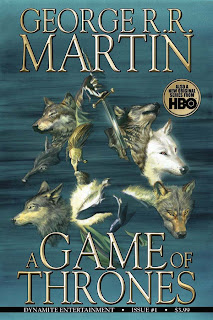 I’ve been more than a little obsessed with George R R Martin’s epic Song Of Ice and Fire this year. I knew nothing about it twelve months ago, and now sit awake at night, wondering if the Blackfyre Rebellion has anything to do with the Summerhall tragedy. I was hooked after the TV series, and have devoured the books. I was soaking up as much of it as I could.

But when the comic adaption was announced by Dynamic, I was dubious. Comic adaptations of thick novels were rarely as good as they should be, and even those that mange to capture the tone are dragged out beyond absurdity. There are well-intentioned efforts, like the Do Androids Dream Of Electric Sheep? comic that uses every single word of text from the original novel, but they turn out to be terrible comics.

The HBO Game Of Thrones is an excellent adaption of Martin’s work, finding its own confident voice remarkably quickly, thanks to some extraordinary acting, some terrific stuntwork and a phenomenal soundtrack

All the comic has is some weird cross-eyed grimacing. 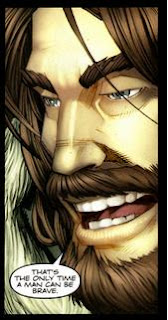 There is no style of its own, it needs moody, stylistic art that captures the filth and depth of Westeros in equal measure, not art that looks like fill-in work for Young Justice. There is no real attempt to do anything with the comic medium, even though the source material offers plenty of opportunities. They could have done some lovely text/art pieces on the history and geography of this fantastic world and its Houses, or use colour and tone to do interesting flashbacks. There are so many chances to do world building beyond plodding through the basic plot. It doesn’t even have any bloody maps, and as the TV show proved, giving these things a sense of geography is essential for story comprehension.

(Weirdly, it reminds me of the Watchmen movie, which was so eager to get on with the plot, it dumped everything that didn’t help that goal, losing all the real humanity and emotion in the story. The Game of Thrones comic is so keen to depict things exactly as they appear in the book, it forgets to get in the weird inner voices and vague feelings that make the novels such a compelling read.)

Instead, it just plods along and gets stuck into the long plot without offering any of the original text’s charm. It all plays out exactly as expected. And you know when the issue gets to the Most Important Moment, because they give it a full page spread. 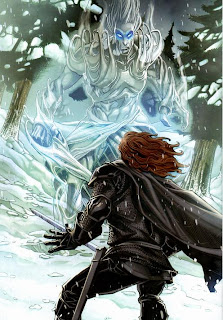 It’s time to face facts, true believers: The full-page panel is designed to show something Big and Important, but its overuse has reduced it to tedium. It’s probably all Mark Millar’s fault, since he loves the full-page spread so much he wants to have its babies and has used it well past its best-before date.

Because it doesn’t mean anything if it is used all the time. Outside of splash pages, comic creators from before the 1980s would only whip out a full-pager if the story absolutely demanded it. When he did go for it, Kirby would always fill a huge spread with loads and loads of Kirby Stuff (including that bizarrely beautiful collage work), and one of the most visceral reactions I’ve ever had to a comic book was Batman on a horse in the Dark Knight Returns, exploding onto a full page 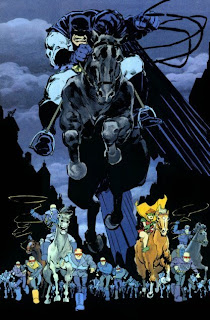 But when it’s used in everything, as a punchline or an introduction or a cliffhanger or a bit where all the heroes walk towards something, it doesn’t have any kind of impact.

The storytelling techniques that permeate modern DC comics are a bit farcical when they manage to make a 20-page comic even less value for money. Look at how many of the new DC #1s ended with a full page splash of somebody posing in a dramatic position, saying something COOL and BADASS. 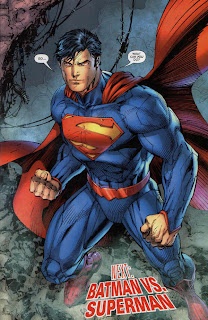 It’s a stylistic tic that has filtered through into almost every modern mainstream in the past couple of decades – pioneered in the bronze age, refined when comics got all grown up and serious, run into the ground by lazy superstar artists of the early nineties and already old and tired by the time Superman died in a comic composed of nothing but splash pages.

And yet, it’s still being used. Nearly every mainstream comic on the shelves has some kind of full page splash, and it’s frustrating that the incredible possibilities of the comic page are ignored as everybody marches to the same beat.

And if that’s frustrating, it’s damned embrassing that the comic version of A Game Of Thrones is easily the worst of any telling. Comics are my favourite medium, and the industry surely have a chance to pick up a few new readers with the comic, only to produce something mediocre and pointless. You shame me with your lack of ambition, comics. You shame me.

NEXT: And another thing….
Posted by Bob Temuka at 9:27 AM

Hear, hear, sir. The own goals which the industry score every time it licenses a popular property and then churns out yet another rumpish product have been flying in this year.

I thoroughly enjoyed this, and I hope you'll forgive the digression if I say that your Holy Terror piece from October remains, with Julius Darius's piece over at Sequart, my favourite of everything I've come across on the subject. Thank you.

Thanks, as always, for the kind words, Colin.

Your own magnificent efforts on Holy Terror have also been appreciated. I kinda gave up defending that comic because I just kept saying the same things over and over, and because reviewers such as yourself are entirely correct in their criticisms, but I have still greatly enjoyed much of the writing about it.