This is the street where the last comic shop in the South Island lived, shortly after last week's devastating Christchurch quake: 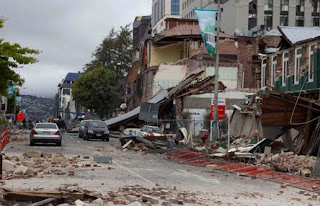 Fortunately, all the staff of Comics Compulsion were unharmed in the earthquake, but people died on their street, and the news that they were okay was bloody good to hear.

It’s still a bit too crass to worry about one little business in a city of misery, especially when the death toll is still pretty uncertain, but I really hope it survives. Comics Compulsion has been the one stable part of the Christchurch comic scene for the past 20 years, and I’ve happily spent thousands of dollars there over the years.

It was the first place I ever started actively subscribing to certain comics, and the store layout is the first mental picture I always get when I read about another comic shop somewhere else in the world. My mate Kyle bought every X-Men comic from them for 15 years and still orders his Doctor Who Magazine through them, even though he could get it much, much cheaper at a chain bookstore. I bought all my Sandman comics from them, filled in an almost complete Grendel collection from its back issue stacks and frequently found gold in a raid on the $1 bin. Seeing that big COMICS sign coming up as I walked down Manchester Street was always a thrill.

Sometimes you had to wait a while for important comic and things to get through, and sometimes it was easy to walk out of there without finding anything worth buying. But the staff were always good, there were often odd gems to be found and it survived, when every other store in the South Island slowly withered away. There were more than half a dozen at one point in the nineties, now there is just the Compulsion.

When last week’s devastating earthquake hit, I first checked in that friends and family were okay, with texts and Facebook posts providing quick relief. Christchurch is the closest city to my home town and I’ve lived there for a year or so, so there were plenty of folk to check in on.

Thankfully - and despite the tragic death toll - everybody I know is okay. And that includes the folk at Comics Compulsion. They have kept their Facebook page regularly updated, even if the future is particularly uncertain. The store is in the shadow of a 22-storey building that has started rotating in on itself and they have no idea if they’re going to get back inside the building. The stock might be okay, but it might just be far too dangerous to go in and get it.
Fortunately, in the last couple of days, they've confirmed that they will still be filling out orders for regular customers (and generating some much-needed cashflow) by operating out of the owner's house.

If it does survive, it is unlikely to be operating out of the central business district any time soon. If it doesn’t survive, it’s a sad end for a fine store that weathered a lot of ups and downs in the comic book industry, but was finally literally brought down by an Act of God. Tectonics beats a good business plan any time.

After all, it’s hard enough to sell comics in this country as it is. New Zealand retailers have to deal with the fickle movements of the international currency market and the unavoidable costs in sending big piles of paper halfway across the world. Individual comics generally cost about three times US cover price in local currency, making them a niche item for many readers.

Shops well outside last week’s quake zone have been hurting in recent weeks, with a monumental screw-up on Diamond’s international shipping meaning many Antipodean stores have gone without new comics for about six weeks (and counting).

So in a business that depends on new and shiny product, there has been nothing new coming in. All the publicity from the recent death in the Fantastic Four is lost, because that particular issue still hasn’t shown up yet, and anybody who has managed to avoid that particular spoiler for this long is doing better than me.

I can be patient. I can wait. But the cashflow for many Kiwi stores has dried up, during one of the most traditionally moribund retailing periods of the year. They can sell a couple more trades, but the shelves are getting a little bare.

I don’t care if I have to wait another month for the last issue of Highland Laddie, but the distributor needs to sort its shit out for the retailers’ sakes. They are putting livelihoods at risk with sheer incompetence.

It would be nice if blame for the Christchurch quake could be so easily attributed. It’s now 11 days since the quake and there are still dozens of people missing. The death toll creeps up day by day, and it’s all pretty horrible.

I’ve donated money to the cause, but there really isn’t much else I can do. Except to wish the staff at Comics Compulsion and everybody else in Christchurch good luck. They’ve been through enough of the bad stuff.
Posted by Bob Temuka at 1:48 PM