There is something genuinely nice about going off the grid, and it's even nicer when you have to plug in again. While it’s good to leave the phone and computer at home, and go get lost for a while, the world goes on without you, and there is always something waiting for you when you get back.

Coming back and catching up on the stuff you’ve missed is ridiculously fun. Even if you’re only away for a few weeks, there are dozens of good articles, essays, videos, blogs and other examples of great writing all over the place when you get back.

I’ve been trying to catch up on comic stuff on the web in the last two weeks or so, but it’s remarkable how quickly all this stuff builds up, and I’ve only scratched the surface of things.

For instance, I still do have to give Tim O’Neill’s dense and fascinating looks at 1980s crossover madness a proper read, and guys like Matt Seneca and Colin Smith continue to put out sharp assessments of the oddest comics at a staggering rate. There has also been more of that brilliant analysis and insight into the current state of the overall market from Brian Hibbs, a long overdue appreciation of the mighty Steve MacManus from David Bishop, (including the first time I’ve ever seen a photo of the big man), and the usual doses of brilliance from guys like Sean T Collins and J Caleb Mozzocco.

It’s also nice to come back to a couple of week’s worth of dimly addictive cartoons like A Moment of Moore and Our Valued Customers, or new movie trailers that actually get me excited about films again. Like Terrence Malick's latest, or the new X-Men movie.

The new X-film has unexpectedly become the one superhero movie I’m looking forward to the most. Partly because I’d totally go gay for Fassbender, but mainly because the trailer is full of sharply handsome people in nice clothes sitting around languidly while some serious weird shit happens in front of them. In the previous films, the sheer weirdness of mutants was often glossed over by running and jumping and kicking and stabbing, but people like Furious Frank Kafka and Dangerous Dave Lynch have mined rich themes from extreme physical metamorphosis, why can’t we have a bit of that with the explosions?

(It also helps that Matthew Vaughn is directing it - I genuinely love his Kick-Ass film every time I see it.)

Actually, scratch all that - the best trailer is undoubtedly the Captain America: Fuck Yeah remix. I’ve watched that bastard a dozen times, and I never get sick of it.

I never get sick of comic news either, from publication woes to new creative teams. The best way of doing this is by relying on several good resources like Spurgeon’s Comics Reporter, and bits of Newsarama and Comic Book Resources and Bleeding Cool and some people’s twitter accounts and bits and pieces of blog.

(It really bothers me to an unreasonable degree when somebody says they don’t bother with regular media anymore because they get all their general news on twitter. Reducing input down to any one format is idiotic – with misinformation and disinformation giving straight data a real kicking in all mediums, it’s necessary to rely on a variety of platforms to deliver a full picture.)

It’s not all fun and games. First week back from a long and leisurely holiday and there are all sorts of heartbreaking stories and images coming from my old home town, and there is the real tragedy in the death of Dwayne McDuffie (a writer who was really at the height of his abilities), and more sad news with the passing of the Brig: 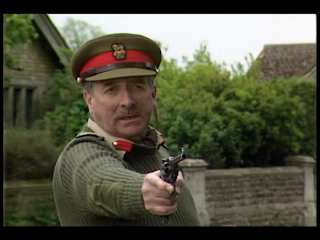 “Pitiful. Can this world do no better than you as their champion?

“Probably. I just do the best I can.”
Life goes on for the rest of us, and there’s always something different to check out. Always something interesting to look forward to with great anticipation. Always a new point of view to consider. Always something new.
Posted by Bob Temuka at 4:40 PM