One of the nice things about the Judge Dredd comic is that the more stylistic and individualistic an artist is, the more successful the story. There is something about that deceptively simple uniform, the weird world of Mega-City One and the comic’s willingness to embrace the absurd that works so well with a truly individual artist.

It’s where the stumpy feet of Mike McMahon can sit alongside Paul Marshall’s absurdly clean line. It’s where a fiercely independent talent like Carlos Ezquerra can build an unexpected and rich history, and then Brian Bolland comes in and makes it all look so incredibly easy.

It’s a comic where an utterly unique artist like Brendan McCarthy can dabble in Dredd over a few decades, and produce some truly iconic and massively influential work.

McCarthy has been there since the early days – and his art was as clunky and clumsy as the Dredd strip itself. Back in the late seventies, neither had really found their own voice, although they were certainly showing promise at this young age. McCarthy was heavily influenced by the dubiously addictive talents of Brett Ewins, resulting in a Dredd that looked like this: 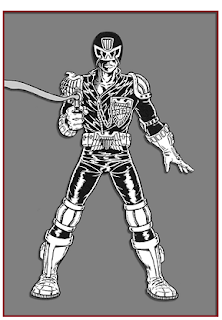 Which is about as generic 1979 Dredd ever gets. But by the time 2000ad had turned three years old, he had moved on. He was off perfecting his craft elsewhere and finding his voice. And when he did, he came back and talked like this: 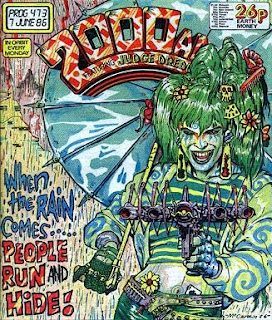 This is something extraordinary and beautiful - I’ve been looking at that cover for 25 years and it’s still as shocking and brilliant as ever. But more to the point: his Dredd looked like this: 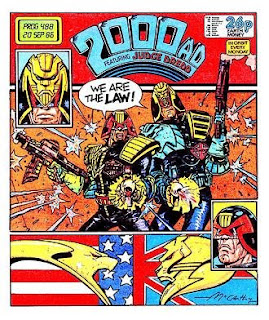 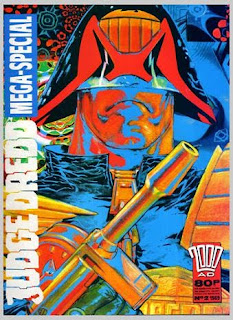 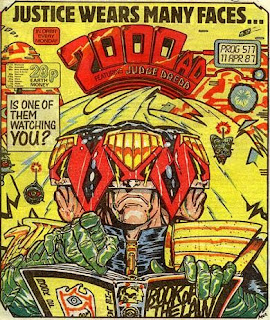 Awesomely coloured and brilliantly experimental, McCarthy’s Dredd has a helmet that only this artist could pull off. While he’d been away from the comic, he’d evolved into a fierce talent that was endlessly readable, while still slightly painful to look at.

Okay, that’s a bit simplistic. McCarthy never really went away, and in between these two styles, he produced several covers and pin-ups that defined Dredd for a new post-punk generation.

In particular, there is this pin-up from the early eighties, later reused as a cover for a reprint: 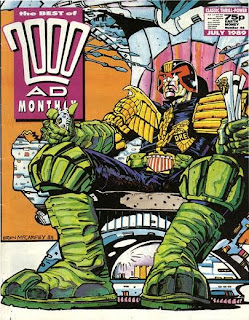 Even by the standards of 1984 - this Dredd is something else. Look at him! Look at his power! He doesn’t need to pose or wave a gun or stomp on somebody’s head to assert his authority, this Dredd is cool as fuck because he is totally relaxed, while still in complete control. Literally clasping the law in his hand, with no need for a massive physique, Dredd’s will is all.

Look at those legs! He’s still got the McMahon big boots (even though a contemporary storyline had Dredd trade his boots in for a tighter fit) – and several current Dredd artists have singled this one piece of art out as a key influence in their work.

He also produced a couple of cracking Dredd doppelganger covers at the time for the City of the Damned storyline, like this one: 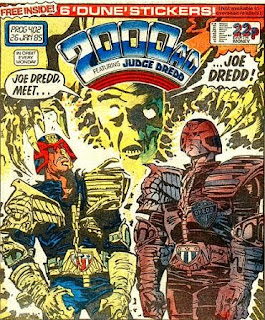 I was 10 years old when this comic came out, and a comic that promised a blind Judge Dredd fighting his zombiefied future self was more than my thrill-receptors could handle. Especially when it all paid off! With violence! - 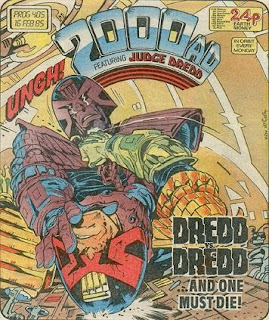 McCarthy always had a humourously clumsy action style that has infinite charms, and in a short few years he had developed an entire style that remains essentially unchanged, while always evolving.

Whatever it was, in the wake of Riders on the Storm in Prog 473, there was to be a rich offering of McCarthy’s Dredd. He went on to do more covers and more stories, including a splendid couple of issues of Oz that let him loose with the Judda – perverted copies of Dredd hiding out in Ayers Rock. Between the hilarious action setpieces and beautifully designed giant mutant Mexican birds, there was always the McCarthy awkwardness, that leads to panels like this, full of rage and power and frustration, while also just a picture of an angry man in his underwear: 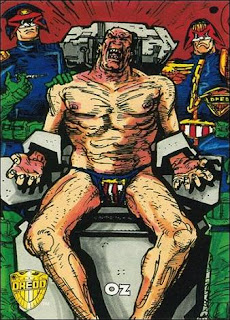 And then, after a typically weird one-off with Jamie Hewlett in Prog 614, McCarthy was off. He buggered off to do terrific covers for Shade the Changing Man, and doomed pieces of brilliance like Skin. There was also a load more film work, which is undoubtedly more lucrative, but there is barely a second’s worth of Highlander 2: The quickening that is worth the months he worked on it. Although, to be fair - the idea of a Brendan McCarthy-written Mad Max film still makes my brain drool.

And then he came back, late last year, with an all new Dredd, and it’s all different again. In one sense, the cozy weirdness of new McCarthy art feels like it never went away, but you have to take another closer look at his Dredd, which has gone somewhere very interesting: 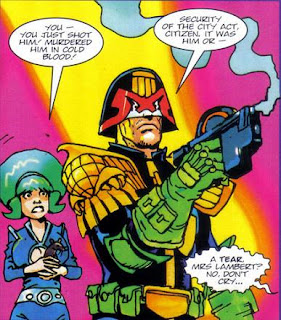 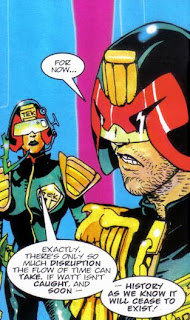 This is something new again. A new, more wiry Dredd, tough as ever, but even more relaxed and again. This Dredd is the same old hard bastard (especially when writer Al Ewing has him threatening an innocent rat and shooting Doctor Who in the head), but he’s a bit more stripped back and a whole lot leaner.

This kind of face is nothing new to McCarthy, but usually it would be used for a tech-judge or some other minor character. To give this face to Judge Dredd promises all new possibilities, and all new avenues to explore.

It remains to be seen if McCarthy will produce any more dredd in the short term future. It’s entirely possible that he’ll disappear for another few decades. But if he ever comes back, it will be well worth watching out for.

Because this is a Dredd that is all new and all different, every single time. There are things that never change, like the basics of that uniform, but there are endless variations, endless possibilities.

What more could you ask for?
Posted by Bob Temuka at 6:06 PM

Well, you got your McCarthy Mad Max. Good, wasn't it?