My head is not yet full

I was having a few drinks with some comic-literate people a few weeks ago, and talk inevitably swerved in the direction of the Nth Man. A late eighties military-porn comic with disturbingly metaphysical machinations, the Nth Man only lasted about a year, but is still fondly remembered by some.

Well, by me, anyway. I have every issue in a box behind me and after talking about it again here, I’m probably going to end up digging it out and reading the whole damn thing again tonight. I really dig the action scenes, and the way the title character remained unmovably driven, even when reality goes all skew-whiff

So when somebody in the group was adamant that it was the work of Chuck Dixon, I was even more unwavering in my argument that it was written by Larry Hama, because I knew I was right, and didn’t have to resort to Wikipedia to verify it. The fact that the Nth Man was created by Larry Hama and Ron Wagner was an indisputable fact, lodged away somewhere in my brain.

So I had to convince everybody that Hama was the proper writer, by showing off my Hama knowledge, dwelling mostly on his GI Joe and Wolverine work, but also making a point of mentioning his appearance on M*A*S*H.

When I was done, I saw a familiar look on one guy’s face, and heard the inevitable question – how did I know all this shit?

And I just felt like somebody from Eltingville. I don’t know how I know all this shit. 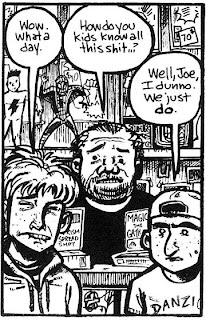 I’m sometimes concerned by the amount of trivia in my head, at the amount of completely useless bullshit bouncing around my brain-box. This can’t be healthy.

Without resorting to any reference work, I could give fairly details biographies of minor characters like Drax the Destroyer and Dum Dum Dugan, and I know who created Nightcrawler and Shanna The She Devil. I could name most of the members of the Suicide Squad, and I know Ambush Bug’s real name.

I know what comics were edited by Dez Skinn and Archie Goodwin, and I know who published Mister X.

I can still name a half a dozen characters from Ghost World without cracking open the book, and if you gave me a piece of paper, I could probably name at least three dozen residents of Palomar. I know more about Knuckles the Malevolent Nun than is really healthy and, given time, could probably name every single series that ever appeared in 2000ad. In order.

Is this healthy, having a brain full of this stuff? And if it isn’t, how come I keep shovelling more in? 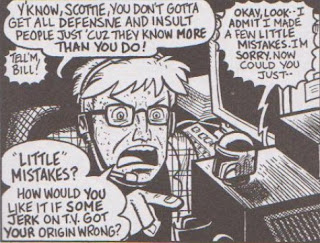 I do sometimes run into people who have far more comic knowledge than me, and I would only do okay in any Eltingville trivia-off. And when it comes to wider society and other pursuits, I’m far from alone. I have friends who possess breathtaking knowledge of music or wrestling or a particular sports team. Many people have incredible enthusiasms. And even though I know a lot about film and television, comics are my thing.

This isn’t so bad, and I only feel a freak about the amount of comic shit I know now and then. I’ve also just been listening to an old-ish interview with Patton Oswalt, where he talked about the virtues of being enthusiastic about things – even massively unimportant things – because who wants to really walk through life with nothing more than a shrug and a ‘meh’?

But surely all this information could have been put to good use. If I had dedicated that mind-storage space to academic work, or towards more creative endeavours, who knows what could have happened? Do I really need to know all this crap? Shouldn’t I have used that energy to improve my station in life? 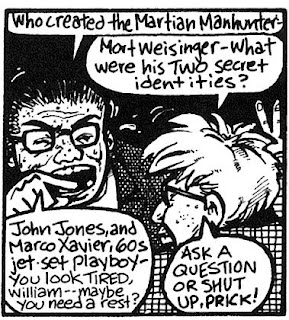 On the other hand, it doesn’t do any real harm, and I’m always up for more. I recently bought a bunch of Comics Journal back issues, and have used them to pour even more data into my head.

(A brief aside concerning the surprisingly small world of comics in this part of the world – I bought the Journals blind in a Trademe auction on the internet, and the seller turned out to be the gorgeous Matt Emery, who was using the sales cash to get more of those lovely Dan Dare books he was talking about here. How ‘bout that?)

I just finished reading issue TCJ #210, an issue from 1999 which I’d been after for ages, largely because it featured the fairly controversial 100 Best Comics of the Century. I knew that the list had pissed off a lot of people, but I’d never read it for myself, until I got this chance.

And I loved it – it was a curiously dated list, and it’s fascinating to look at what was fashionable in comics criticism at the tail end of the 20th century, and I kinda wish the Journal folk would do another one, just to compare the differences (For instance, I doubt Understanding Comics would crack the top 50 again) The list is also full of really good writing about really good comics, but the thing I loved most about the list was the number of comics I hadn’t even heard of.

I’ve now found room in my brain for things I didn’t even know existed a week ago. There are now files in the system inside my head for Harvey Kurtzmann’s Jungle Book and Jules Feiffer’s Tantrum and Jack Jackson’s Los Tejanos and Carol Tyler’s The Hannah Story and Krigstein/Feldstein’s Master Race and Kurtsman/Elder’s Goodman Beaver and Justin Green’s Binky Brown Meets The Holy Virgin Mary. And those files definitely need further elaboration.

To be fair, those were the only comics on the list I hadn’t actually heard of before, but that’s a shocking lack of knowledge on my part. I thought I knew a lot, but I don’t know shit, and that’s something to rectify. 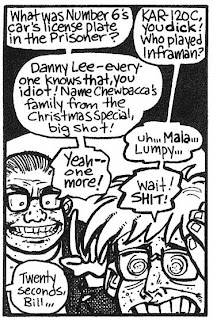 It isn’t a limitless pit inside there, and some things inevitably slip out. I’m a lot vaguer on things like Ron Marz’s Green Lantern comics, or the finer points of the Omega Men, than I used to be. I get a sadistic enjoyment out of reading old issues of Wizard I bought in 1994, because they often remind me of things I had forgotten all about.

Things fade over time, but it’s only the mediocre and bland comics that get forgotten. I never forget all the good stuff.

Unfortunately, my definition of the “good stuff” is disturbingly broad, encompassing everything from deeply esoteric art comics to the latest X-Men comics, so while some stuff slips away, most of it just gets piled up on top of old knowledge, stretching the brain’s capacity to fit in more information about Quentin Quire. 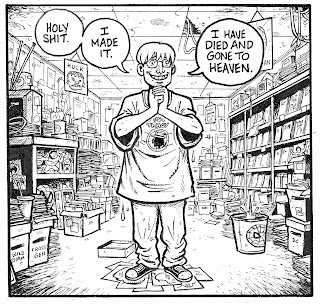 In real life, I do try to hide how much bullshit I really know – one of the reasons for this blog is an opportunity to show off how much crap I know, without freaking out normal folk with my babbling on about Jim Sterenko or the comics in Doctor Who magazine or the history of Jonah Hex.

But sometimes I can’t help myself, especially when somebody is patently wrong about a known fact. I won’t be able to help myself then, or any time the talk turns to the Nth Man again.
Posted by Bob Temuka at 7:11 PM