Stories about plagues wiping humanity are, by their very nature, pretty damn grim. It’s hard to find laughs in mega-death body counts, and hopelessness & nihilism are usually the order of the day.

But sometimes these stories show that even when things are at their worst, there are some things that are worth fighting for. Sometimes these stories aren’t all about hatred and fear, but about small doses of kindness and compassion and hope in the darkness, with love lighting the way into a new world.

Sweet Tooth turned out to be one of those stories.

It was never my favourite comic, but Sweet Tooth was always a good, solid read every month. I only started getting the series because it was one of Vertigo’s attempts to get new readers by offering the first issue for a dollar, and it totally worked, because I only picked up the first issue on a whim, and I just kept on getting every one after that, every month.

I kept buying it mainly because it had its own distinctive look. Jeff Lemire’s art is messy and slobbery, which ensured Sweet Tooth didn’t look like any other book on the stands. At a time when so many of DC regular comics – including some fairly dull superhero efforts from Lemire – have the same tediously scratchy stylings, Sweet Tooth had its own distinct look, which even managed to be a great fit for the brown colour palette Vertigo insists upon.

It also had idiosyncratic actions scenes that were always well-paced, while many of the individual issues had interesting things going on in the story structure, sometimes splitting the narrative in different directions, while maintaining a strong sense of symmetry.

And even though Lemire did occasionally work with other artists on the book, his own regular art ensured that Sweet Tooth was the product of a singular vision, one creator’s voice, something that is also fairly rare in DC’s current stable of titles. It was always Lemire’s story – and nobody else’s – and there was never the sense he was pandering to anybody, anywhere.

That kind of distinction doesn’t seem to go a long way with the general comic-buying public. Sweet Tooth was never a huge seller, so it wasn’t that surprising when it was announced it would end with the fortieth issue.

Even though the news it was ending was slightly disappointing, it did feel like the story came to a natural conclusion. There was a suitably tragic climactic storyline, with explanations and revelations and one of the main characters finally getting to make the sacrifice he had been after for so long, but it never felt rushed or compromised.

The final issue came out this month and proved, somewhat unexpectedly, to be something of a happy ending. Most of the action in the series took place over several months (with flashbacks that sometimes dated back more than a century), but #40 went forward years and years into the future, to show how things worked out for the main characters, and I always love stories that give a glimpse of how everything ultimately turns out, especially when they actually work out okay.

It doesn’t happen straight away – the final war still has to be fought and there is the worrying suggestion that the same old cycle of anger and tragedy could restart all over again, until someone stands up and declares that it doesn’t have to be like that anymore.

And so, after more than three years of death and despair and hatred and perseverance in the face of terrible odds, these characters get the happy ending they really deserve. 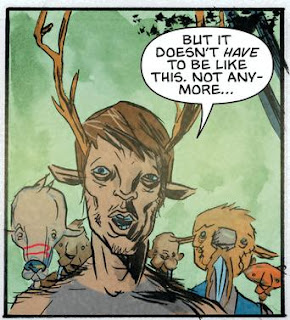 The final issue is also the first one in the whole series that is genuinely post –apocalyptic. This apocalypse isn’t over in moments, it’s going on for years and for most of the series, Armageddon is still happening – Sweet Tooth wasn’t the story of survivors trying to rebuild the world, it was the story of the last dregs of humanity finally fading away, to be replaced by a new world.

No wonder the series was choked with grim misery - the end of a species is nothing to chuckle about. But the new world that rises from the ashes of the old, dominated by a race born of old gods and new men, does offer clear hope for the future, because it’s a world that has learned the lessons of the lost world, ushered in by good men with playoff beards who are willing to die to protect an innocent future.

The comic has a suitably blunt environmental theme, a warning that nature is bigger and more powerful than man, and will only take so much before lashing out. But it doesn’t overwhelm the story of Gus and Jeppard, and the people they met on the road to the new world, both innocent and cruel, both man and beast. 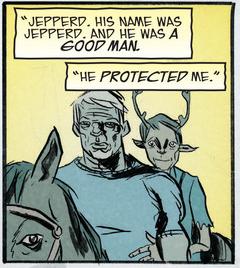 It doesn’t even matter that most of these characters aren’t even strictly human. As Matt Santori-Griffith pointed out in this excellent essay, Sweet Tooth harks back to a long tradition of stories set in the future and featuring characters who are strange hybrids of beast and man, but that doesn't mean the characters aren't without their humanity.

Gus has his goofy antlers, but he’s still just a boy who doesn’t want to be alone in a cruel world, and that’s more important than all the modern genetic manipulation and ancient biology that fills the story.

Ultimately, this was the thing that made Sweet Tooth a comic that was worth getting every month, even if it was never the first one I would read in any weekly stack – there is still love in the darkness, and Gus learns to let all of the old fear and hatred fade away, along with the last humans.

Even though it was never my favourite comic, I got a little emotional reading the last issue of Sweet Tooth, and seeing Gus grow old, surrounded by friends and family – he is still always that little boy in a cabin in the woods, even as a proud leader and ever prouder father, but he isn’t alone at the end of the world.
Posted by Bob Temuka at 10:43 PM