It’s a little disconcerting to realise that when Hellblazer comes to an untimely end soon, Fables will be the longest-running title with consecutive numbering published by DC. It’s around the 125-issue mark - seventeen collections and dozens of spin-off volumes - and the only DC title in triple figures. Nothing else comes close.

It’s not the actual numbers that are weird – comic numbering is just a matter of marketing these days - it’s the realisation that Fables has been trucking along for a good decade now. Bill Willingham’s story still feels like one of the new kids of the Vertigo line, when it’s really an old man.

Fortunately, even after 10 years, it’s still a quietly entertaining mix of conflict, humour, fairy tales and humanity, with some of the most consistently gorgeous art in mainstream comics. 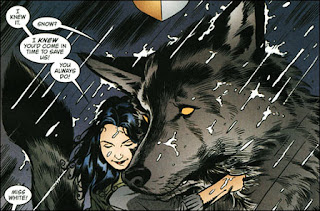 It is widely regarded that Fables stopped being an essential read once the Great War it was leading to was actually dealt with, but I’ve found the post-empire Fables comics to be far more interesting. With the inevitable success of the rebellion, the comic moved into a more uncertain era, as the collapse of a multi-realm empire turned out to have some unexpected consequences.

The immediate effect of the aftermath was that everything went wrong almost immediately, and the main characters, (those who weren’t slaughtered), were sent running for their lives from an impossibly powerful villain.

But even that storyline wrapped up a year or so ago, with one of the primal forces of the universe sacrificing itself for love. But things remained grim, with the most recent storyline putting a bunch of children through terrible ordeals. 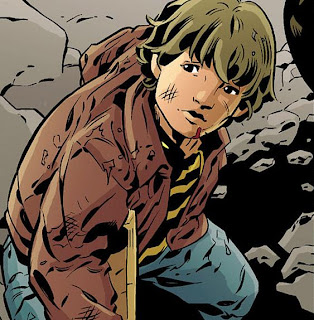 Fortunately, Fables isn’t always depressingly dour, with plenty of lighter periods in the comic’s history. And while it has certainly been a pretty grim comic for the past couple of years, it’s never been gritty, thanks to Willingham’s deftly light touch, and to the lovely artwork from Mark Buckingham.

The first few years of the title saw several changes in artists, although clean clarity – with just a touch of individual style - was always the main goal, giving the fantastical a grounding in something like reality. But Buckingham has been the main artist for some time now, and is still clearly relishing the chance to draw all kinds of heroes and monsters in all kinds of settings, something new every month.

Buckingham was a ferocious experimenter in his youth, with comics like Neil Gaiman’s Miracleman giving him the chance to play with a bewildering amount of styles. But he soon settled in a clear, flowing line that gives his figurework a malleable freedom, while never obfuscating or overwhelming the script.

When they do get some guest artists in, it’s people with similar stylish simplicity, like P Craig Russell or Zander Cannon or Adam Hughes or Shawn McManus or Gene Ha. But it’s Buckingham who has been the main artistic force behind Fables in its latter years, and who continues to keep it looking so good. 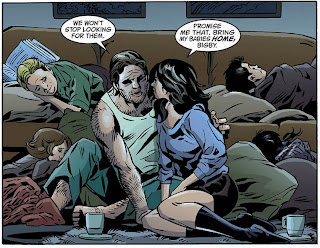 It would be difficult for anybody to find hard faults in Buckingham’s work, but Willingham’s story isn’t so universally admired. Some readers can’t get past the writer’s politics, and read hidden agendas in the most innocuous of storylines (or, in the case of something like the Israel analogy Willingham did once, can see the obvious agenda in the most obvious storyline). Other critics have written off Fables as a bit twee, or a bit over-simplified, or a bit rambling.

But with Fables, Willingham – whose superhero comics are always a bit clumsy and weak – has found a voice that delivers an entertaining and thoughtful take on the concept. The whole idea of fairy tales in the real world is nothing new, and there have been several television shows that have shamelessly taken Willingham’s ideas and done their own stories around the same concept, but they do not have the same light touch as Fables.

It isn’t the crazy idea of things like Snow White and the Big Bad wolf being a happy couple in modern New York that makes Fables so appealing, it’s the characters of Snow and Bigby, and the way they interact, and talk, and love, and fight, and would die for each other. Flycatcher’s journey from lowly janitor to the greatest of kings is genuinely moving, and the death of Little Boy Blue leaves an aching hole in the middle of the story.

There are still some spectacular set pieces and real humanity, in there among people who aren’t even remotely human, but Willingham will just as often swerve left when the story is going right, and enjoys cutting off the set piece at the knees, to focus on the effects on the main characters.

And they are main characters who grow and change, even if they stay the same physically. The fact that Fables more or less takes place in real time is a real rarity in regular, monthly comics, and the characters who aren’t in the comic for a couple of years go of and have a couple of years worth of life, unseen by the reader, is one of the storytelling techniques that make Love and Rockets such essential reading, down through the years.

Regular character building over a decade of monthly comics is always going to produce some depth, and Willingham and his artistic partners have used that depth to their advantage, giving the heroes and villains of Fables – all of whom are centuries old - new life.. 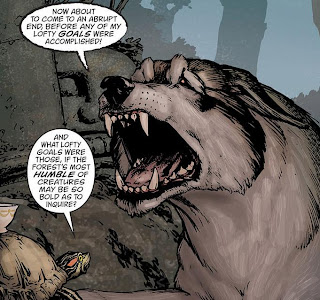 I was deeply fond of the Jack of Fables spin-off and bought every issue, because it could have gone anywhere, and usually did. But I also wasn’t that gutted when it reached a natural conclusion with its fiftieth issue. It was a joke that had run its course, and it fittingly ended by literally blowing up the vast cast the series had built up over four-and-a-bit years.

Even though a few of the characters have had their happy endings in recent issues, Fables still shows no signs of stopping, and even if Vertigo does finally fade away, DC would be extremely foolish not to keep it going.

It might have reached its own natural conclusion when the great and evil Empire was destroyed, but there are always more stories to be found in the happily ever after.
Posted by Bob Temuka at 11:49 PM

I totally agree about Fables being more interesting post-adversary. I remember assuming the series would pretty much end once the Adversary was defeated since it seemed to be one of (if not, the) driving force of the series' overall plot.

It's when the war ended and the series kept going that it got really exciting for me since the story (AKA Willingham) could basically do whatever it wanted.

I realized that that the world of Fables actually exists separate from the plot, and can be explored/enriched/returned to ad infinitum. (Pretty much what Marvel and DC have been doing for decades with their respective universes). It may sound like a no-brainer, but it's pretty hard, and takes time, to established a "living, breathing" world that can maintain reader interest.

The series has also become more character driven, which works since Willingham has done a superb job endearing the characters.

Hope that made sense.