My Age of Marvel

I must have had a dozen issues of Marvel Age at one point, back when I was a prime Marvel zombie. This is the late eighties, and I was in my early teens, and those Marvel Age things were incredibly informative and entertaining.

Of course, I got rid of them ages ago, in one of my very first great purges, sometime before the turn of the century. By then I was a grown up, and even though I still had a huge affection for Marvel – and still do, to this day – I also knew that Marvel Age was just advertorial for the great Marvel monolithic machine, churning out more mediocre product, and trying to sell it as something new and different. So they were all gone.

Except for the one issue of Marvel Age that I just found buried in a box beneath a bunch of embarrassing fiction I wrote as a teenager. And looking at it now just makes me feel one thing – I might hold on to this one, because it’s from my time as a faithful Marvel fanboy, and it was a simpler time. 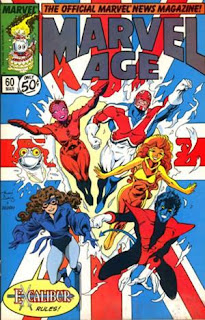 All of the Marvel Age issues I once had were confined to a single era – the very late eighties, because that when I was between 12 and 14-years-old, and that’s the prime age for Marvel zombification.

There is something about that age that makes Marvel so attractive. Avengers and X-Men are just a bit more grown up than Richie Rich, and young teens don’t give a shit (or even notice) if you’re pandering to them. They just want some sexy action.

Marvel comics have always been pitched at this demographic. They might do some stuff for little kids, and – very occasionally – there will be a genuinely post-adolescent comic from the company, but Marvel has always shamelessly targeted twelve-year-old boys who just got their first part-time job to pay for their habit. 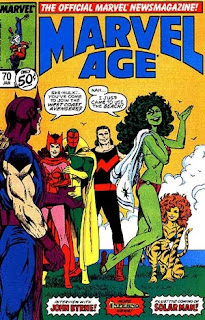 It certainly worked for me. Between 1986 and 1990, when the comic world exploded with tonnes of great and important works by the likes of Spiegelman, Moore, Los Bros Hernandez and dozens of others, I was burying myself in the cosy comfort blanket of Marvel continuity, obsessed with figuring out what Doctor Strange’s relationship with Eternity was, or how New York was going to survive the Inferno crossover.

No wonder I bought every issue of Marvel Age I could find, because they were full of background details and checklists and creator interviews and short history lessons. Marvel Age was always a total shill for the company’s books, but for anybody who was that obsessed with those comics, and because the internet was still a decade away (and I could never find any issues of things like The Comics Journal or CBG), it was a goldmine of information.

And it sometimes felt targeted directly at me. In that lost issue I just found, there’s an ad for the first Excalibur comic, which is about to become my absolute favourite comic for the next three years. And looking at all the titles listed in the big Marvel checklist at the front of the magazine, the only one that I didn’t own an issue of – at one time or another – is the motherfucking Care Bears. (I even had a copy of Alf #1 at one point.) 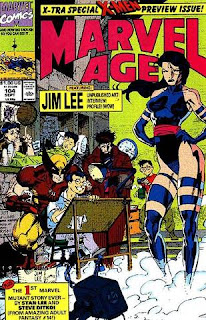 I bought copies of Marvel Age because it was the only place I could find an interview with somebody like Larry Hama, right at the slim moment in time when I thought GI Joe was the greatest comic ever, and I bought it because it gave me a glimpse of the Marvel universe, beyond the few titles I could find, or even afford.

At one time, Marvel Age was an absolutely invaluable source of information, both behind the scenes and concerning future projects. But now I suddenly find them equally fascinating from an historical perspective. The issue I just found is exactly quarter of a century old, and offers a glimpse of time gone by, of long-cancelled comics and half-forgotten creators who eventually get chewed up and spat out by the Marvel corporation. 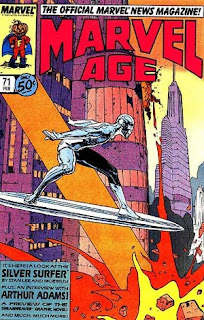 There is zero chance any of these will be reprinted, but there are still things worth reading in them, not least of which is the double-page Hembeck gag-fests in the middle (and I love me some Hembeck).

There are also interviews with comic creators, some of whom are sadly no longer with us, and there are some history lessons about the Marvel Universe. The one I just found has an excellent write-up of Marvel’s graphic novel collections that makes me want to chase up more of them (especially when they’ve got art by the likes of Berni Wrightson, John Bolton, Michael W Kaluta and Charles Vess in them). Although I might give Super Boxers a miss.

It’s all about selling the new book, but there is also something oddly charming about the way they are so relentlessly positive, (unless they’re talking about the aborted JLA/Avengers crossover). There is none of the bitterness or creator mud-slinging that every other comic magazine of the period had, and even though this was another era of internal strife for the company, with changes in ownership, Jim Shooter’s last days and the continued mistreatment of its founding fathers, but there is no trace of any of that in Marvel Age. It’s only about the comics.

It's hard to get too cynical about this kind of enthusiasm. 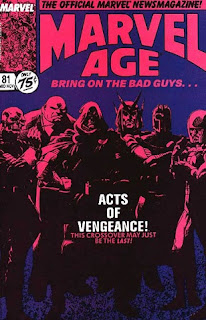 My Marvel Age isn’t that special. It’s easy to think of it as the blandest of comics during the blandest of decades, and there is certainly an element of truth, with solidly dull artists like Keith Pollard, Ron Frenz, Al Milgrom and Alex Saviuk (all of whom I’d still rate above most of the amateurish scratchy bullshit seen in DC’s New 52 books), on top books like the Fantastic Four and Thor, and most of the comics are written by weary journeymen, who have been doing the same old shit for too long.

But there are also doses of brilliance, largely thanks to the non-Marvel Universe titles. Marvel was publishing brand new Moebius comics in the late eighties, and there was regular Groo fun every single month, and the New Universe did get unexpectedly interesting after The Pitt, and Byrne hadn’t become a total parody yet, and Claremont was still doing interesting new things on the X-Men, especially with Marc Silvestri taking over as regular penciller.

The future is being written in those issues of Marvel Age, and it looks squiggly. Names like Silvestri, McFarlane, Portacio and Lee are making their first appearances on the Marvel titles in the checklist. These artists will transform Marvel over the next decade, firstly with their artistic talent revitalising some of the company’s most tired titles, and then with the long and painful legacy they left behind when they shipped out to Image. 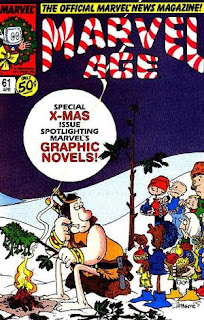 It wasn’t long into the post-Image Marvel before I fell out of love with the whole universe, disillusioned by terrible comics and a burgeoning awareness of how much of a shit the company could be towards beloved creators.

And that’s the other main reason why I haven’t just thrown Marvel Age #61 out with the rest if them. It’s a reminder of a time when all this stuff really mattered, and I couldn't get enough of it. And it's a glimpse into a Marvel that doesn't exist anymore, except in the heart of the 13-year-old boy hidden inside me.
Posted by Bob Temuka at 10:31 AM