Star Trekking (across my universe)

There are a lot of good films that I’m looking forward to in 2013, from esoteric arthouse nonsense to big budget blockbusting bullshit, but there is undoubtedly one movie I’m craving to see more than any other – the new Star Trek.

My love of all things Trek has its up and downs over the years. There have been periods when I’ve been ultra-fascinated with that whole universe, and other times I couldn’t even be bothered to watch entire series.

Right now, I’m on a high from the new movie coming out, and because I’ve been re-watching selected bursts of the Next Generation over the past few weeks. It’s a love that can last a long, long time, but it doesn’t last forever. 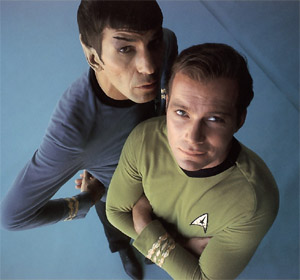 I didn’t exist when the original series was on television, which is a pretty good excuse for not being into it at that stage, although I can’t remember a time when Star Trek wasn’t being repeated on TV screens. And I was only four when the first motion picture came out, and I never got to see that until years and years later (I did have some Kirk, Spock and Ilia action figures from the first film and, against all odds, I still all have in one piece, more than three decades later. They probably only survived because when I was a kid, I thought the Star Wars figures were waaaay cooler.)

But I was seven when the Wrath of Khan came out, so I was primed for it. It was the first film I ever took a girl on a date to, and I can’t remember her name (Angela? Lisa?), but I still remember my excitement at seeing the film on the big screen at the State Theatre in Timaru, that long-ago Saturday afternoon.

I still think it’s the best Trek film by far – it certainly has the greatest score of any of them (which I’m listening to on YouTube right this second), the editing in the action scenes is still breathtaking, I love the timeframe fake-out and the Kobiyahi Maru cheating, and I still bawl like a little girl when Spock stands up in the radiation room and straightens his uniform, and the way Shatner chokes on his words during the funeral, even though I know it all turns out okay.


And even though nothing has ever matched that original experience of that first date, I’ve still seen all the Trek films at the cinema, including the good, the bad, and the downright ugly. Sometimes I had to go to elaborate lengths to see them – I had to literally beg my big sister to take me to see The Voyage Home, and I had to hike more than 20 kays to see Star Trek VI – and sometimes it totally wasn’t worth it. I still remember trying to justify the Final Frontier to a dubious cousin after we walked out of the cinema, and all I could come up with was that the bit where the shuttle jumped on board the ship was pretty sharp.

But even though I roughly adhere to the general idea that the odd-numbered ones were the rubbish, I still enjoyed them all, even number five. There was always something about that cast, in that world, racing around the universe to save worlds and to rescue their best mates, beating all the odds to save the day.

The films could be slow, and all of them still have their cringe-worthy moments when you realise these guys are getting just a bit old for this shit. But each of them had brilliant parts – Spock in his spacesuit, blasting forward into the unknown; the theft of the Enterprise, and its necessary sacrifice; the crew’s literalism bouncing up against a thoroughly ironic modern-day San Francisco.

The Undiscovered Country is my second favourite of all of them, and makes me despair Nicholas Meyer didn’t do more, but is a lovely send-off, giving everybody something to do, and it’s Shatner’s best Kirk performance of all of them, from the nakedly ugly hatred of the Klingons at the start, to his old man resignation on the prison planet, right up to his single best delivery of ‘Fire!’ in the entire series. 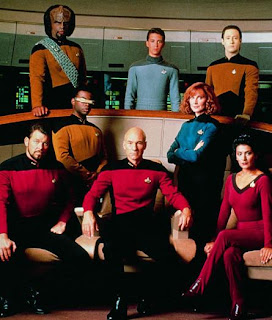 I was still buzzing from the last original crew movie when I got into the Next Generation, and again, Star Trek was tied to a big personal first in my life – the first proper thing I bought with my first ever proper paycheque was a fancy TV aerial, because the Next Generation was switching to a channel that didn’t broadcast in our part of the country.

That aerial was shit, but I still managed to see every Next Generation episode that screened after that, if I was willing to put up with a shedload of static. A lot of the Next Generation episodes don’t hold up well – especially all the touchy-feely emoting and the dubious attempts at outright humour – but the series could still be wonderful. Patrick Stewart was always giving goofy stories unexpected gravitas, and was often strikingly vunerable, and the supporting cast of solid, unspectacular actors could also prove unexpectedly interesting at various times.

The stories were often formulaic, but every now and then, there would be a perfect little slice of Star Trek, like the first time the Borg came calling, or the episode where Picard lives out a whole life as an average man on a faraway planet, or any of episodes that got up to time-travel shenanigans. The final episode – which I watched in the first flat I moved into, two weeks after leaving home - included many of the elements that made the series so worthwhile, and the catharsis of seeing Picard finally settled down to play cards with his friends was earned.

When it wrapped up, there were diminishing returns afterwards. Deep Space Nine managed to remain relatively interesting by becoming a war story, but I only managed a couple of seasons of Voyager, and by the time Enterprise came out, the whole thing was trapped in inert and boring formula, and I didn’t even make it through the first season. I thought my love for Trek had completely atrophied.

It hadn’t. It was just lying dormant. Like Spock on the Genesis planet. 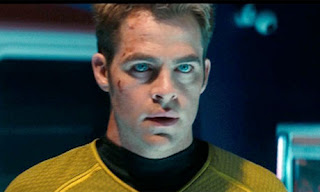 I know a lot of Trekkies were shattered by the JJ Abrams reboot, seeing it as a travesty that feeds off the original concept like a vampire, but screw those guys. I thought the new film was fucking excellent.

Sucessful reinvention of 20th century entertainment icons for the 21st century often involves going right back to the original concept, and telling those kind of stories with a modern sensibility. It’s how Bond managed to stay fresh after fifty years, and how superheroes like Spider-Man and Batman remain phenomenally successful at the box office.

I loved the sexy swagger and the shiny new tech. I loved the way the actors channelled the original cast, but all brought something on their own, and the way the film still found room for the magnificent Leonard Nimoy (the bit where he recognises Kirk on the ice planet is only moving because of Nimoy’s performamce).

Needless to say, I’m looking forward greatly to the second film in this series, especially when I’ve half-convinced myself that they’re going to invert things and kill off Kirk, instead of Spock, in this one. 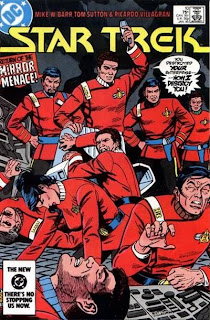 Even some of the innumerable Star Trek spin-offs led to short-lived obsessions. I actually thought the terrible Star Trekking song by the Firm was the greatest tune in history at one point, and I still know all the words, and… Oh bollocks, I’m going to have to listen to it again:

Outside that, I never really got into the novels - out of the hundreds produced, I probably only got through about a dozen of them, and most of those were by Peter David. But there were periodic love affairs with the comic adaptations.

Again, I was too young for the Marvel series that came out of the first motion picture, but was the ideal age for the DC series in the eighties. I’m still slightly impressed by the way they worked around the tight continuity of the eighties films, but I also liked them on their own merits, especially when they had the lovely Tom Sutton art (he could never quite get the technology looking right, but his figurework and caricatures were excellent).

There was a terrific Mirror Universe saga at the end of the DC series’ first year, and some lovely work from that man David again at the very end of that whole volume which again shadowed an important note in my life – I remember buying the second to last issue of that series on the same day I first kissed a girl.

But, once again, any interest I had in the comic adaptions dried up by the time other companies took over the license, and I haven’t even glanced at any of IDW’s increasingly large body of Trek comics. 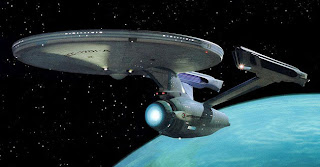 But maybe I’ll check out some more, because I’m feeling a fever for Star Trek again. There is a new movie coming up, and I’m feeling that urge again to check out strange new worlds, and new life, and new civilisations.
Posted by Bob Temuka at 7:32 PM

"...involves going right back to the original concept"


In that case they should admit that the every Enterprise after the original TV series was a lame duck re-interpretation and go back to the original design.