We don't need to know what Judge Dredd is thinking 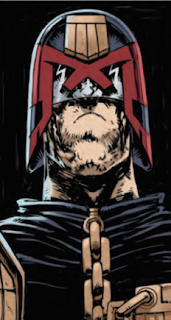 I'm been reading Judge Dredd comics ever since I was 5-years-old, and collect almost all the Dredd comics I can get, even when the Megazine went through some truly dodgy periods. (Although I don't get any of the American versions, because even I have my limits.)

You can tell any kind of story in a Judge Dredd comic, and that has certainly been part of its long appeal. But while I still gave those American versions of the character a go before rejecting them like the mega snob I am, there is one thing I can not abide and will not touch, and that's Dredd in prose.

I hated every single short story they wrote when it was filler in the old annuals and yearbooks, and I've never been tempted by the many books written over the years. There were a few novels in the 90s that didn't really go anywhere, the odd one-off like the Dredd vs Death book to tie into the game (which I still feel guilty about accidentally shoplifting 20 years ago), and a tonne of e-books, novellas and printed omnibus version in the past decade.

They are often created by writers who have done some marvellous comics work with the character, and often have a good idea or two.They tell tales set at interesting points in Dredd's timeline and no doubt give some new insights into the world of Judge Joe Dredd.

And I hate them all. I hate the way they fill in the small details that didn't need to be filled in. The way they have to describe all the details of life in Mega-City One, instead of seeing it for yourself in the art. I hate the way that writers who are restrained by the terse nature of the regular Dredd shit get to overwrite the shit out of everything.

But mainly I don't like getting inside the head of a judge. I particularly don't want to get inside Dredd's head, and have no interest in wondering what thoughts are behind that the implacable visor

It just feels wrong. It feels as wrong when someone who lacks the skill of o-creator John Wagner (which is pretty much everybody else in the world) gives him too many introspective captions in the strip. We don't need to know what Dredd is thinking, unless he's wondering what bullet to use on a scumbag perp.

I can go for the Dredd movies, because they have the same sense of comics, where you only get what you see and hear coming from the characters, and they don't have to pad out pages describing how the garbage grinders in Mega City One work (and considering how many perps somehow end up in them, doesn't really deal with why there really aren't better safety standards).

It's the dream of the modern entertainment corporate, to have a character or property that can translate to multiple mediums, but sometimes a character is only at their best in the original context, and Dredd really does belong to the comics.