Alex Ross: Look at this photograph 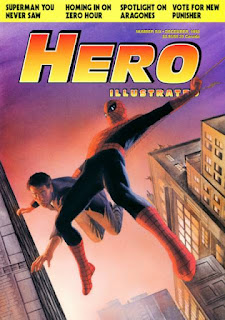 After years of browsing the magazine racks in all the bookstores, I'd trained my brain well to look for the sharp lines and bright colours of comic book covers by the early 90s. Almost everything has gone digital these days, and mag sales have fallen through the floor, but once upon a time there used to be hundreds and hundreds of regular magazines showing up at the local stores.

The comics would always be lumped in with the lifestyle mags and the car magazines and cooking recipe things that I profoundly did not care about, but it was never hard to find the comics tucked away in one corner. The flimsy things never produced the profits worthy of the space and would be shoved down with all the other kids stuff.

But there I was in 1992, seeing if there was anything new besides the latest issue of the Red Dwarf Smegazine at the local branch of Paper Plus, and was about to walk away when I realised that there was a picture of Spider-Man on the magazine behind the boring old Beano.

It turned out to be the first issue of Hero Illustrated that I ever found. A Wizard knock-off, I saw Hero long before I ever saw an issue of the original mag, and it blew my freakin' mind. I never grew up with magazines about comics - no Comics Buyers Guide, no Journal, no nothing - I got most of my comic news from the Bullpen Bulletins, or by seeing what titles had vanished from the subscription forms.

But this chunk of magazine was just saturated in news and reviews and interviews. It was the place where I first found out about Bone or got told to read the Robinson/Smith Golden Age story. Even the much derided price guide was indispensable in a pre-internet age, just for finding out when Morrison started on Doom Patrol.

I fucking loved that magazine - and still have it today - and right from the start I was glad that my eyes hadn't just slid right over that photo on the cover. And then it took me hours to realise that it wasn't a photo - I'd  just thought that it was another one of those attempts to capture superheroes in photos, I just thought it was some kind goofy fumetti shit.

It was stunning to realise it was a painting, and that it was so damn realistic. On any kind of close inspection it was obviously a painting, but even as I snatched it up off the shelves, I thought it was real

I've read and enjoyed all of Ross' work since. Marvels was just the comic I needed when I moved far away from home, and Kingdom Come was the sharp end of DC 90s. I thought his Uncle Sam thing was terrific, and even those big tabloid schmaltz fests had weight to them. I haven't had a chance to see the new FF book he's done yet, but I like the different style and the garish colour on the little I've seen.

And sure, there is always going to be a part of me that thinks it really does all look like some kind of goofy fumetti shit, I still remember that small shock of realising what his art really was, and how satisfying it was. And how much beautiful information about the four-colour funnies that lurked beneath those paints.