Raw art of the Star Wars 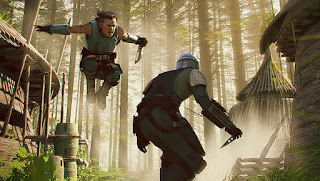 It's so weird that one of the best parts of The Mandalorian TV show is when the end credits roll, and you see some of the lovely concept artwork, and it invariably looks so much more exciting and dynamic than the scene they actually shot from that idea.

Concept artwork has been one of the great strengths of every piece of Star Wars, ever since the late, great Ralph McQuarrie first gave the universe its distinctive face. It's great to see them continue this tradition with the current generation of stories, and have such pride in these visions that they are shown at the end of every episode, but they really do highlight how flat the lighting and staging of the actual show can be.

There's a wide variety of styles in the artwork, as raw imagination spills out onto the canvas, and they often have the swagger of an individual look, which is then lost in the calcified look of the Star wars universe. They're not something created by committee, and signed off a thousand times before being released - it's the raw creation.

And there's just a hint of exaggeration that gets lost in live action. The ancient Greeks figured out that the best representations of the physical form had to be slightly more human than an actual human, and this artwork gets this, with often photo-realistic work still stretched slightly beyond the real life anatomy.

It's even a little disturbing that the static images are so much more full of action, because you've got to have good action in a Star Wars to make it worthwhile - you could forgive George Lucas for all the nonsense his characters spout if they're surrounded by incredible light-sabre duels, massive spaceship battles or a high-octane speeder race

There's been some dreadful Star Wars action lately, from directors who can do so much better. One anti-gravity bike chase early on in the Boba Fett show was embarrassingly inert and sluggish, even as the artwork which inspired it has the momentum of the speed lines spilling out.

I'm not sure I'm really going to follow much of these shows anymore, but I'll always check out their art.