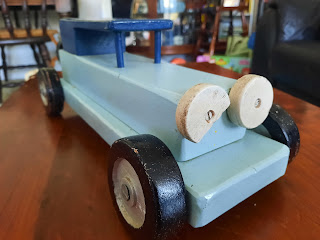 My girl turns three today, which is about the age you can get start getting them some kick-ass presents. And of course we went overboard and got her a toyhouse that is almost as big as she is, what sort of parents would we be if we didn't?

Still, even with the astonishing technology, outrageous selection and well-honed fun of modern toys, it still does my heart great joy to see the kids play with the same toys that were always my faves.

Some aren't really age appropriate - like my oldest and dearest GI Joe figures, which we had to replace with nicer copies - but she just thinks they look neat ,she doesn't need to know that Mr Blue is the leader of an international terrorist organisation.

And sometimes I just see them hauling around my favourite old stuffed elephant - the one stuffed toy from my deep childhood that I held on to for all the years. He's a bit stained after those years, but we gave him some new eyes and fixed up his snout a bit, and he's getting a bit of love again.

Most of all, there's my grandfather's wooden block car toy, which is still getting loudly driven around the living room.

He passed away in the early 80s, but I still have a couple of things that my Grandad built in his little shed, including a chunky ammo-box that has stored my action figures and a sturdy wooden box that has been jhhome to my Invisibles comics since the 90s.

But this blue car he made for me might be holding up the best, even with that busted headlight. It's still solid and smooth, and I always thought of it as a gangster's car, but the kids just like the way the wheels roll.

When my Grandad built it out in the sheds, shortly before he died, he would barely have been able to imagine it would still be a favorite toy 40 years later. I wish I could get e message to him, wherever he is, and let him know that he built something that lasts, something that will almost certainly outlast the huge toyhouse we gave her today.

Anyway, we're off to the zoo for the birthday morning. The toys will still be here when we get back, and for many days to come.